Old textbook, entitled Deutsche Schreibschrift (German cursive) that I thought might help. Fat chance. I have no idea what I'm supposed to be writing. 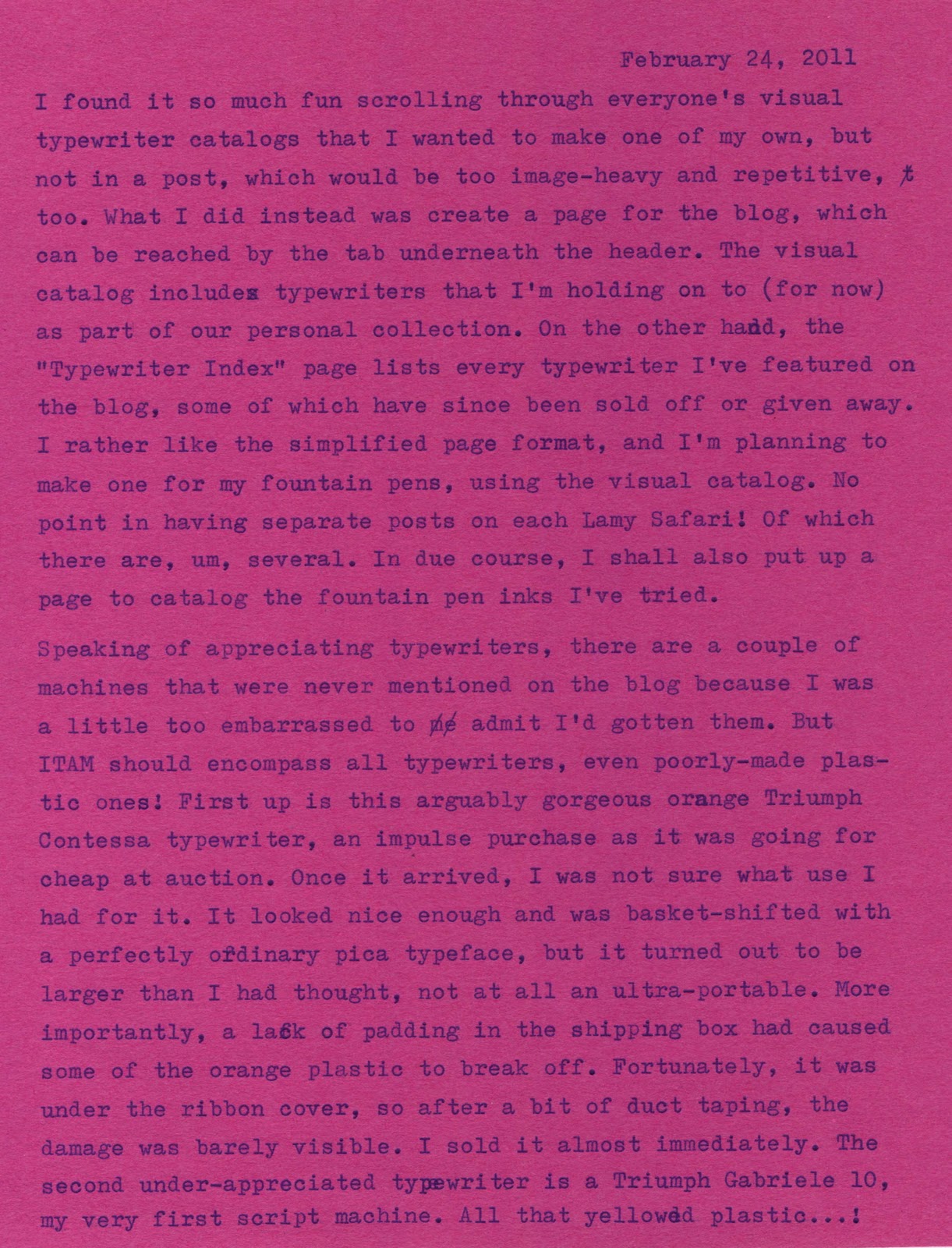 Posted by Adwoa at 8:46 AM 11 comments:
Labels: Triumph/ Adler, Typecasting

Swissas are not very common in the States, but just last week a typewriter identical to this one - it is the exact same color and also has a Swiss keyboard - sold on eBay US. Pity the seller did not put up a typing sample...
Posted by Adwoa at 11:24 PM 6 comments:
Labels: Collection, Swissa

The Elements of Type Styles: A Collection

The cast of characters, from the top of the roll call:
Posted by Adwoa at 11:20 PM 10 comments:
Labels: Collection, Eye Candy, Typecasting

As though to make me feel better about not having any type-ins to attend nearby, and also to commemorate International Typewriter Appreciation Month, there has been an astounding number of typewriter sightings in Geneva in the past couple of weeks. So many, in fact, that I shall put up pictures now instead of waiting for the end of the month, as I had intended. The above is a lovely yellow Brother that was spotted in a thrift store. It has been relabeled M-Office because it was carried by Migros, Switzerland's largest retailer.

From the same thrift store, a very pale blue Royal Signet. I had never seen this model before and was very intrigued when I spotted its ultra-slim profile in the case, which proved very difficult to take off because it had been broken at some point and the lock was jammed. But pry it open we did - I had to find out what typewriter it was, at least! Very nice, although it's almost wholly plastic.

Facit TP-1: unremarkable gray color, but reputed to be a good writer. Facits are not all that rare in Geneva, suprisingly, and I see many more of them around than Japys or Olympias, although France and Germany are our neighbors.

This Saturday, the flea market yielded a bumper crop of new sightings. The very first was this hard-to-miss sunny yellow Beaucourt 441, another rebranded Brother typewriter. The name Beaucourt comes from the town where the Japy factory was located in France, and it seems their later machines carry this label - although it is doubtful whether Japy was still making its own machines by the time this one would have been released sometime in the '70s. In fact, as Paillard (the manufacturer of Hermes typewriters) bought out Japy in '71, who released this machine, a direct competitor to the '70s Hermes Baby? Hmm... *strokes chin*.

Well, I'll leave that up to a more accomplished historian (hi, Will!). Next up on the list of sightings is a Mercedes portable from Germany, probably made in the '20s. It was in fine condition, and had a Swiss-German keyboard which is not apparent from my picture (taken in very strong sunlight).

A few feet away, another Mercedes! This time a standard typewriter which looks to be from the turn of the century (or 1910-ish at the latest), with a French keyboard. Not in great condition, but certainly not unsalvageable either.

First Hermes sighting! I was beginning to worry... This one was in excellent condition, with a large elite typeface (11 characters per inch, which I deduced from looking at the ruler).

Cutest find of the day: this Underwood 315, pica typeface, with a pretty color scheme and accompanying typing instruction book published by Payot, a Swiss bookstore. For the most part, I no longer bother to ask about the prices of typewriters, since I have a general idea what the response will be ($10 to $30) and I don't want to give the sellers false hope that I might be buying. However, J was already talking with the seller about a Tivoli Audio PAL radio, so I snuck in a question anyway and the answer was within the range I had envisioned: $15.

Here's an Adler Primus that looked - externally - like it had been sitting in a damp basement for 50 years. Once I opened the case it seemed decent, but still quite musty.

Next to the Primus was this poor old Continental Standard that I am positive was fished out of the depths of Lake Geneva just that morning. Look at this thing! You'll find this picture in the dictionary right under "rust bucket".

There are some days I wish I was the curator of a typewriter museum - one where everyday is a type-in and visitors can use all the machines as they wish. In this fantasy, I would also be given permission to acquire the best typewriters I find while out and about, like this Underwood Noiseless Portable which I could barely tear myself away from. It looked to be in immaculate condition! In fact, given the absence of any logos on the front of the typewriter, I was not sure what it was, but recalled that my friend Georg had a similar machine on his website. Sure enough, here are some pictures of his identical Underwood Noiseless.

I was not the only one entranced by the gleaming typewriter - this little boy kept calling out loudly to his mother to come and take a look. Sadly, she ignored him. Ah, well.

This Remington Standard 12 was the last typewriter sighted on Saturday. A rather handsome end to a very fine morning!
Posted by Adwoa at 11:11 PM 13 comments:
Labels: Eye Candy 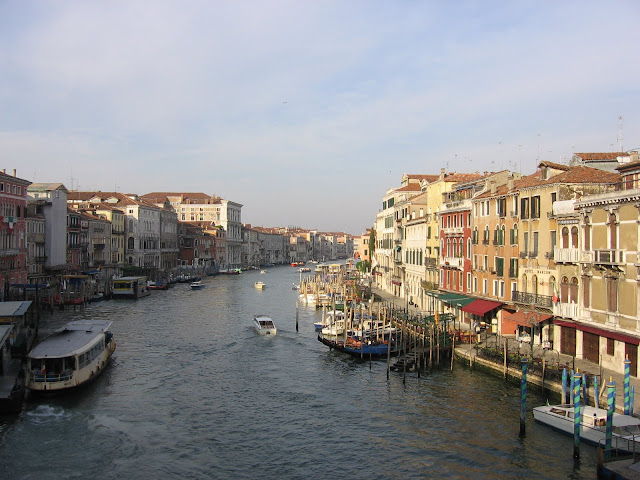 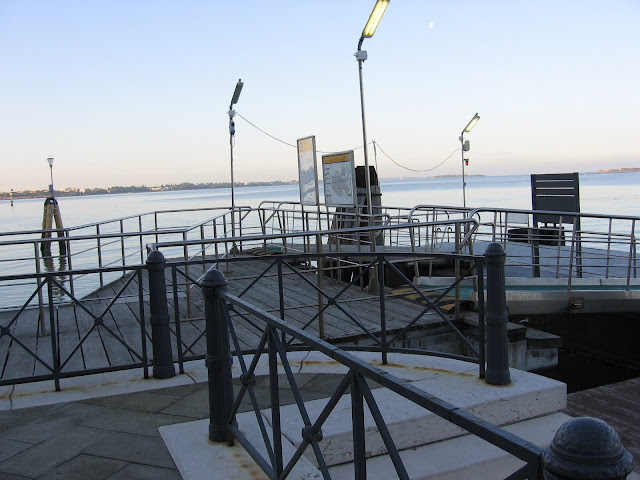 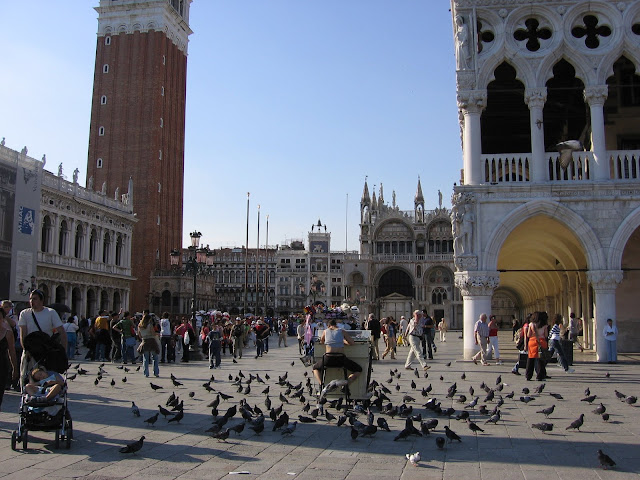 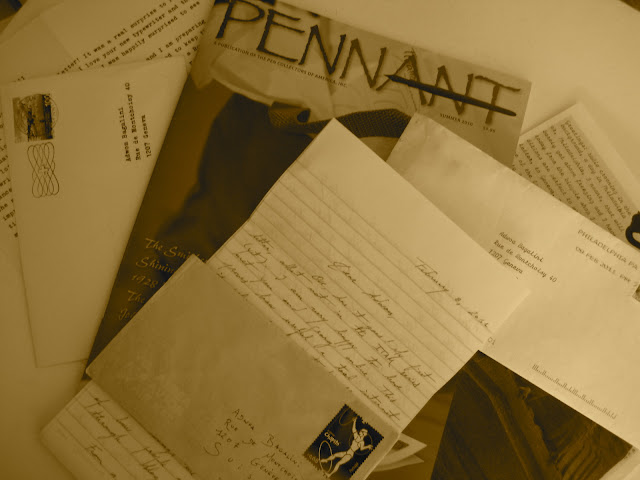 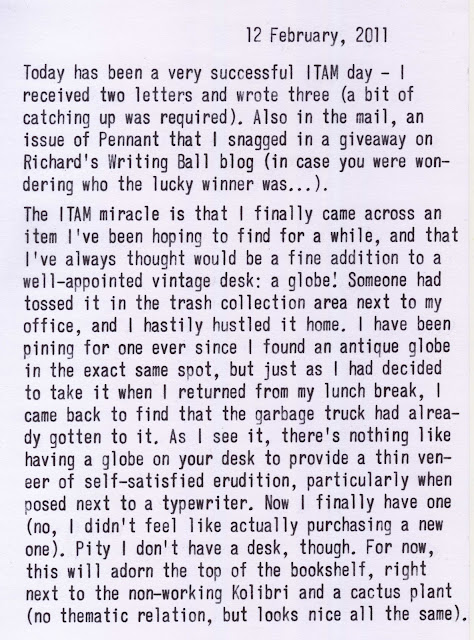 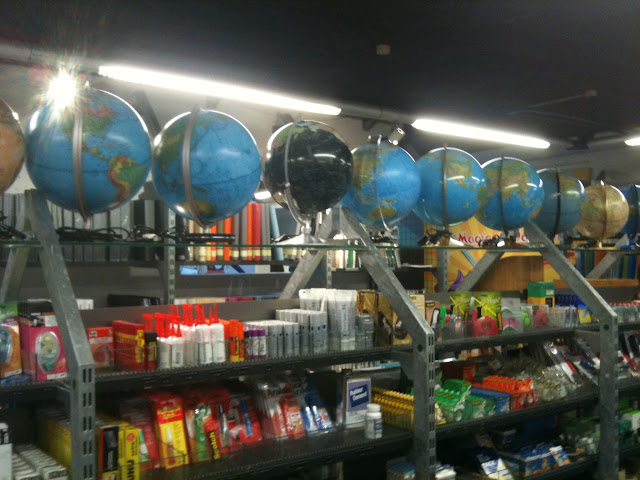 A shelf full of globes in a very well-stocked stationery store downtown. I couldn't bring myself to buy one brand new, though, there's no character in that! Nothing like finding one in the trash that its owner has given up on (possibly because the plastic on which the map is printed is peeling away from the globe's surface at the axes), slapping some scotch tape on it to camouflage the imperfections, and giving it a second life as part of the living room decor. 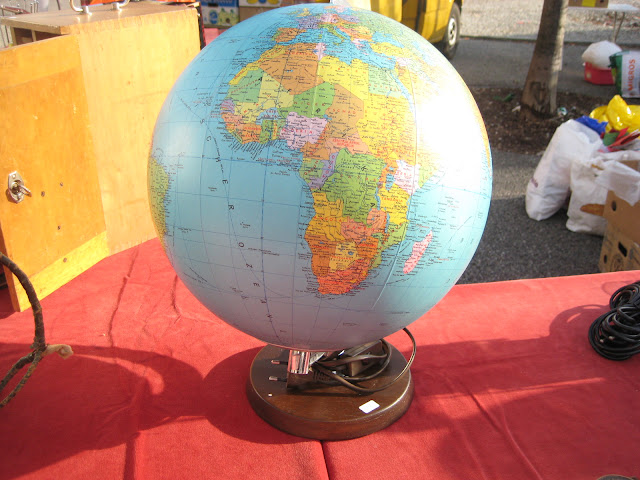 My "dream globe" displayed at the flea market, but for $200, I could only look. The one I found looks sort of like this - if I squint really hard. It's about the same size, but is a geographical map rather than a political one, meaning it doesn't have all the oranges and pinks of this one, just blues, greens, and pale whites and yellows. I find it obnoxious that every. single. globe has a cord to light it up, but fortunately the previous owner snipped off the cord on mine before disposing of it. 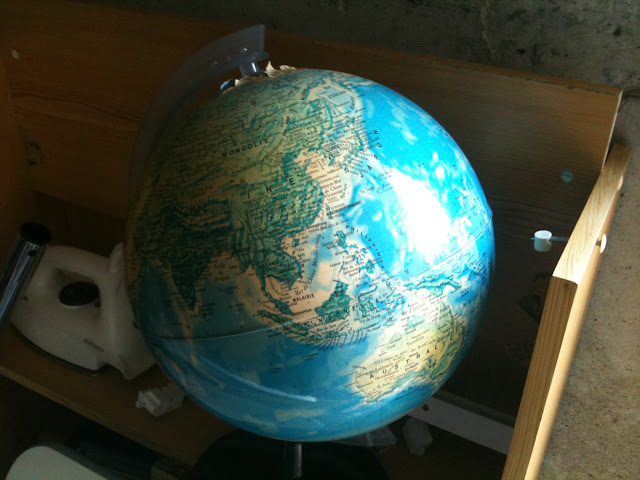 The globe as I found it, peeling map and all. I'm looking forward to using it as a prop to liven up my typewriter pictures in the future.
Posted by Adwoa at 10:38 PM 4 comments:
Labels: Typecasting

Pencast: A series of firsts

It is only Wednesday, but I am already impatient for the weekend to roll around so I can play with pens and paper and attempt to figure out what exactly it is I am supposed to be writing. In the meantime, I have a couple of pencasts from this this past weekend, when I opened up a bottle of ink for the first time and dipped a couple of pens. 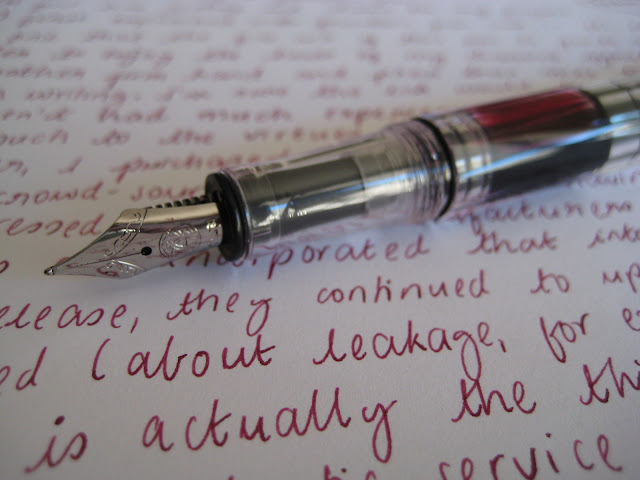 This is the TWSBI Diamond 530, a "crowd-sourced" pen I purchased because I was intrigued by the story of its conception (I also mentioned it a couple of posts ago.). It didn't disappoint, either. The ink in the photo is Diamine's Syrah, which I really like because it is red/purple/pink-ish (it is meant to be the color of a red wine) while still being fairly demure and not eye-searing.  The color in this picture is represented much better than in the pencast, which is below. 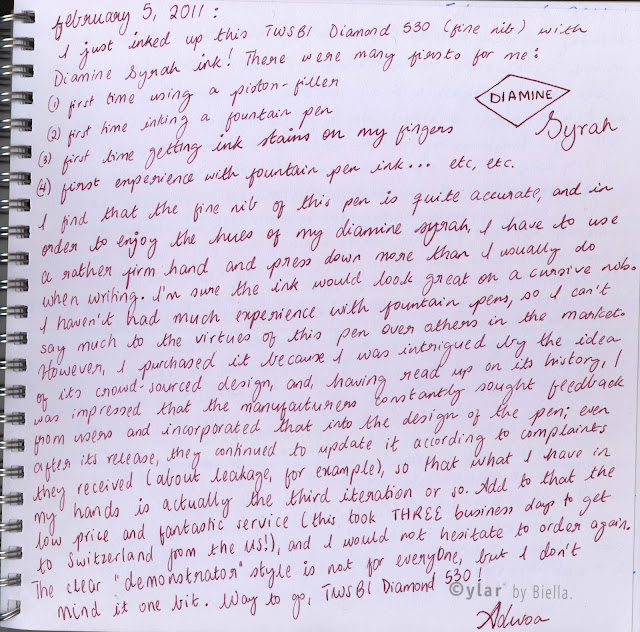