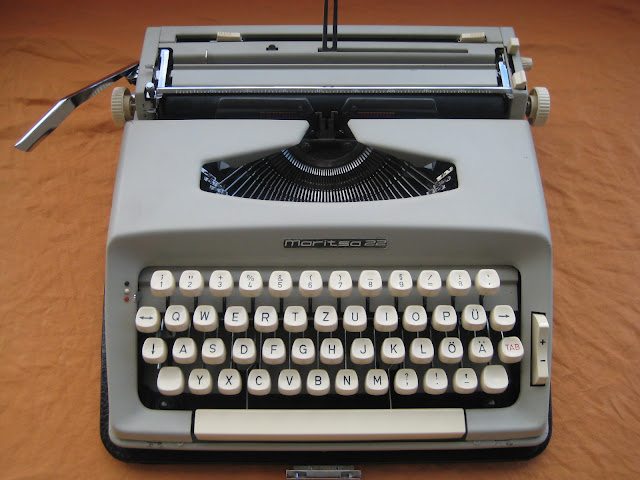 When I first started to have an interest in typewriters, I only wanted one small machine that I could use for filling out forms, and a plastic Hermes Baby fit that bill and did so nicely for one whole year. I assumed the font was standard, what all typewriters came with (now I know it was pica). I did not even suspect there could be other typefaces until I came across Fresh Ribbon's blog and discovered her great variety of whimsically-named script font typewriters. "Smitten" cannot describe how I felt after seeing those beautifully-linked letters dancing across the page. I was immediately on a quest to find my own script typewriter! 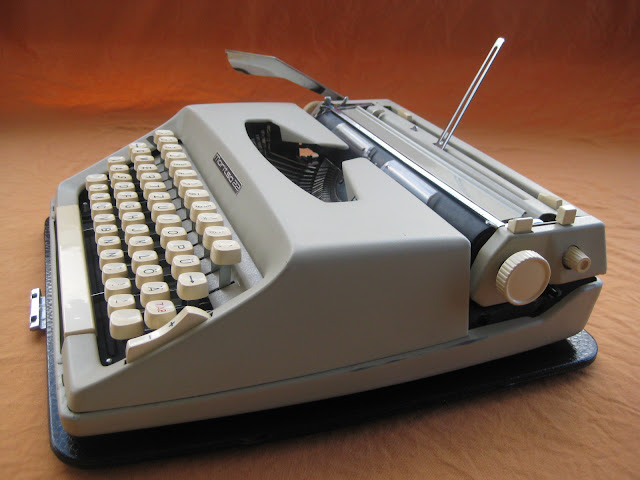 And so it was that my first correspondence with other Swiss collectors were frantic appeals to see if any of them had a script machine they would be willing to sell to me. I had seen a large number of script Hermes 3000s on eBay US, and Switzerland being the homeland of Hermes typewriters, I didn't think it would take long before one of those much-adored machines turned up in my backyard. Well, I was wrong. The collectors I wrote to did not have script machines to spare, and Mr. Perrier (of the Lausanne typewriter museum), had some but they were buried so deep in his stock that he could not find them. He told me it would take some time... well, he wasn't kidding - we had that conversation four months ago. 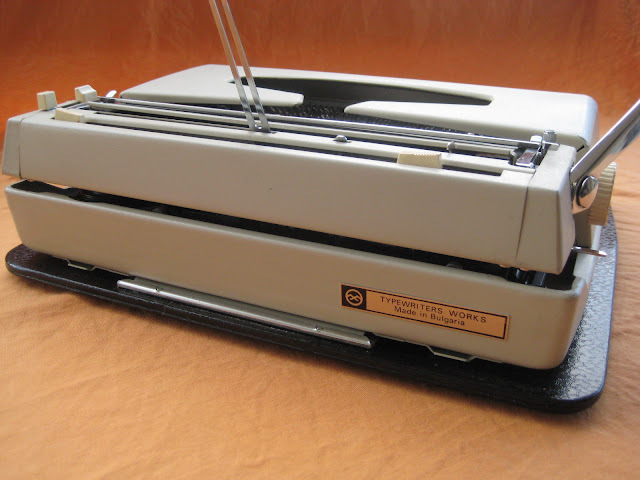 Although I had assured Mr. Perrier that I didn't need a script machine *urgently*, well, I kind of did. The thing about script typewriters is that virtually every major brand had them as an option on their most popular machines, and outwardly, they look precisely like their pica and elite counterparts. So if you are browsing auctions where no one ever offers a picture of a font sample, and hoping to uncover a script machine... well, it's impossible. There is the theory of the "1" key, that script typewriters have a dedicated numeral 1 key where others might not... but I have found non-script machines with the "1" as well. I bought a Japy Script hoping it would be, well, script... no luck. I pored over auction pictures of machines I knew had been manufactured with script typeface as an option... Olympia SM3, SM7, SM9, Splendid 66, SF, and Traveller Deluxe, Olivetti Lettera 32, Adler Tippa S, Hermes 3000 - all for naught. I was flying blind and did not want to risk paying expensive shipping costs and getting another pica. Heck, I did risk it a couple of times - and it never paid off. 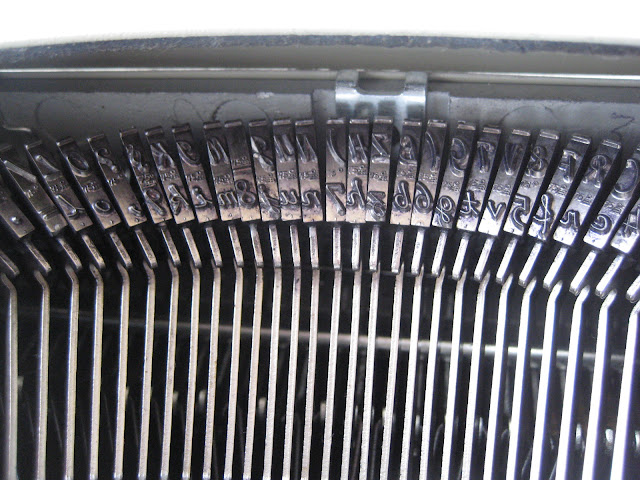 Finally, it sunk in that the only way I could ensure that I would be getting a script machine was if the seller had specifically mentioned it in the auction. Otherwise, I would end up with a houseful of duplicate machines in every typeface but. So, I waited, and finally, a Triumph Gabriele 10 turned up on eBay in Germany. It was a hideous bulky yellowed plastic thing, but I wanted it anyway, and I got it. And it was script, and I was enthralled, but the machine was no less hideous to behold for its graceful lettering.  So, when this Maritsa 22 turned up a couple of months later, I leapt in to bid. I did not see much beyond the macro picture of the type slugs included in the auction (reproduced above), as well as a 30-year-old typing sample that the seller had provided. If I had read further, I would have noticed that the seller clearly stated that the machine was "completely stuck" and "NOT WORKING". 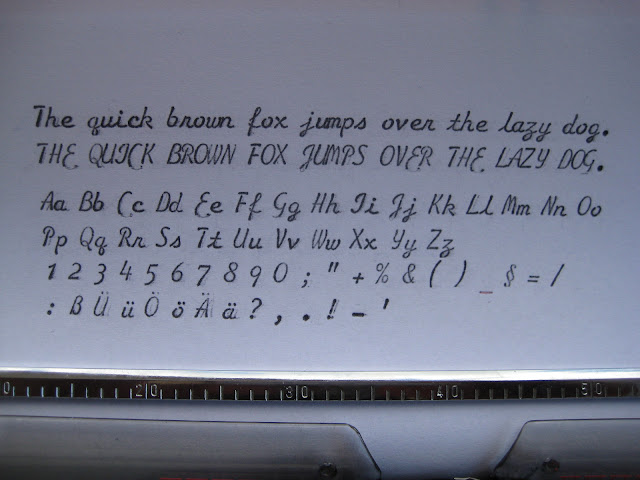 I was outbid at some point, but I was obsessed and bid again, higher. Finally, the auction was over, and the script typewriter - one with a solid metal body, at that - was mine. Victory!

But first, a little introduction to the Maritsa 22: It was built by Typewriter Works in Plovdiv, Bulgaria, and is a slightly re-engineered version of the German Princess 500 built by Keller und Knappich. Typewriter Works produced their own versions of the Princess machines for several years, and you can read about the progression of various models and the comparison between Bulgarian and German machines on Will Davis's site. 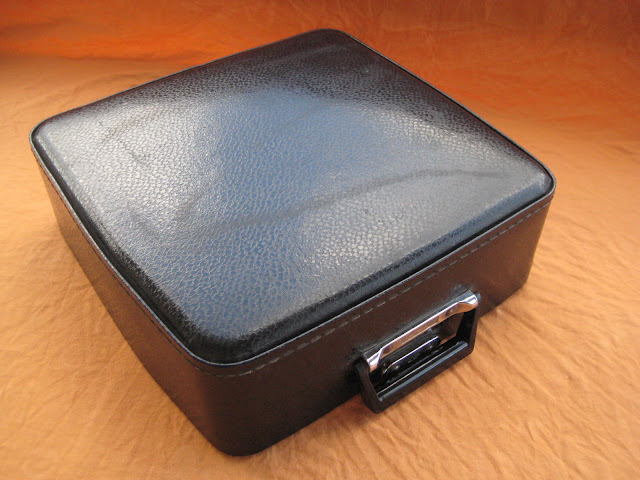 As an owner of a Princess 300 (re-badged, however), I shall freely admit that this Maritsa 22/ Princess 500 is a step back in terms of design - not only is it significantly larger and heavier, but it is also carriage-shifted! Talk about inefficiency. However, those descending capitals (look at the C and E!) make me swoon, so I shall have to grin and bear it.

When the typewriter arrived in all its flimsily-packaged glory, it was indeed firmly stuck. The keys could barely be depressed, and they barely lifted out of the type basket, let alone getting to the platen. The beautifully etched type slugs mocked me. I was desperate - and so I did a dip and dunk, hoping to get out accumulated grease and dirt. Several hours later, it was clean and dry, but still refused to type.

Sensing I was mere moments away from throwing the whole thing in the dumpster, I permitted my husband to go ahead with drastic action, applying a chemical that sends shudders down the spines of typewriter-repairmen everywhere: WD-40. Oh, yes. That took a good hour of lubing and manipulation, but at least by the end of it, it worked! And it still does.

If the worst comes to pass and everything I have read about WD-40 being poison to typewriters turns out to be true... well, this isn't a priceless collectible or anything, so it won't hurt too much if it dies. But while it is alive, I have my friends and family admiring my flawless penmanship, and I can read script casts in the typosphere without being consumed by envy. Which, really, is all I wanted.
Posted by Adwoa at 11:36 AM
Labels: Princess/Maritsa, Script/ Cursive