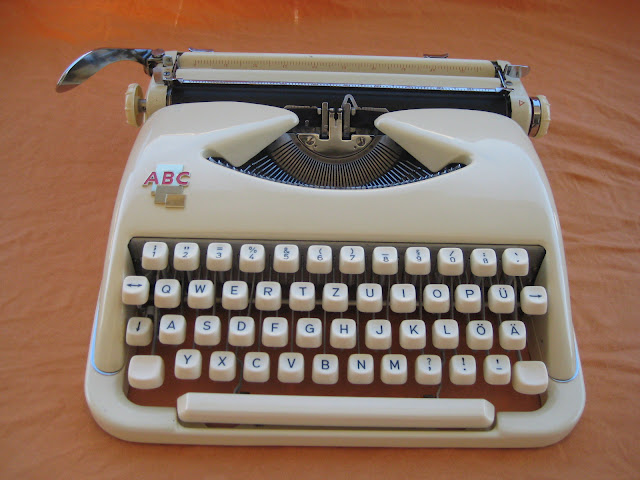 Last Friday, I received this ABC typewriter, which I had picked up for a bargain on a Swiss auction site (please note that this was before my vow of typewriter chastity, which is still going strong). Anyway, ABCs don’t take up much space, so I figured in the worst case I would put it on a shelf in my bookcase and take it out from time to time, just to admire. In fact, looking at ABC typewriters seems to be the only thing they’re good for, so that worked out. 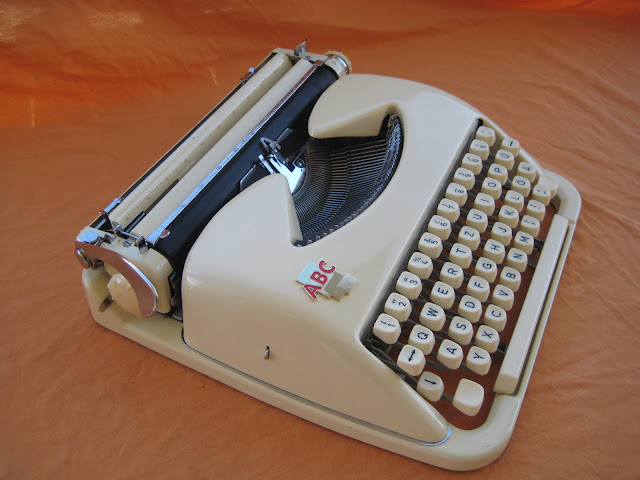 You see, when I received this machine, the box was rattling ominously. Something was amiss, and once I opened it, the carriage mechanism pretty much fell off in my hands in a hail of screws and washers. This, I did not attribute to careless shipping. I have seen many shipping accidents in my day and they did not involve screws that magically unloosened themselves. 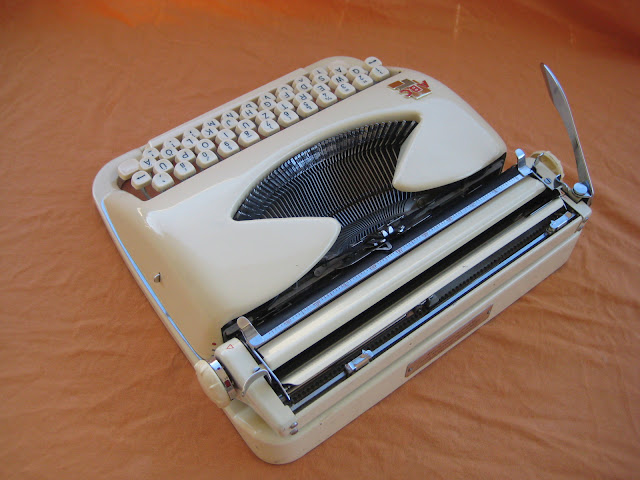 Fortunately, I have another ABC - a series 4 in hammertone green, so I was able to study it and figure out where all the screws, springs, and miscellaneous metal bits had to be re-assembled on this ivory Series 3. Without the template to copy, I would have been up the creek on this machine for sure. It ended up well, more or less - I have determined that the paper finger on this machine is missing for good, after shaking it thoroughly to ensure that it was not just stuck in some crevice. 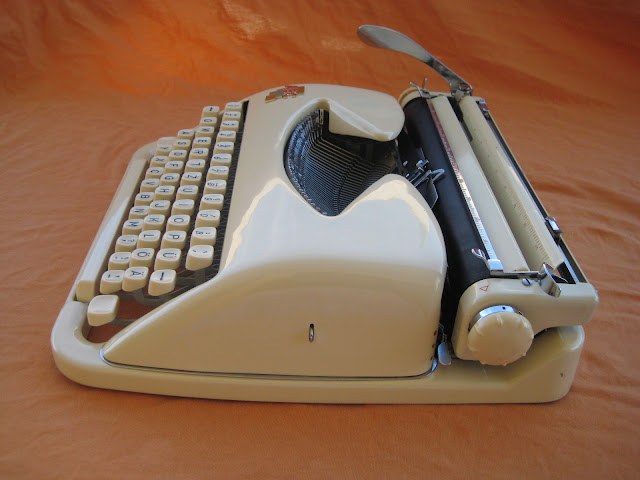 At the end of the day, this Series 3 is remarkably similar to my Series 4. There are small differences: this came in a soft leather-like case (which was shot, by the way), and so the best way to use it is with a typing pad of some sort. The protruding metal tabs on either side of the ribbon cover (which, fortunately, were redesigned in the Series 4) serve as a latch to take off the cover. The ribbon color selector is in the same discreet location, though, and the mechanism seems identical. 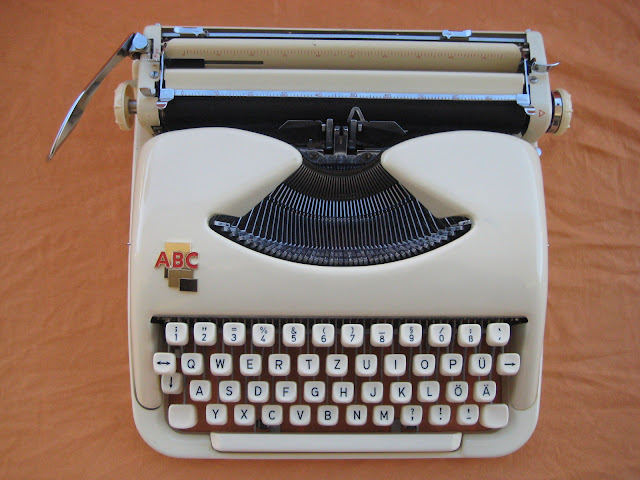 The logo, while large and not as subtle as the other version, is still very nice in person - three gold squares in different sizes superimposed by a large uppercase ABC. The gold is very pretty up close. The ivory paint finish is still glossy and remarkably well-preserved (considering the state in which the machine arrived). It makes a nice contrast to the hammer-tone green. This has a typeface of 11 characters per inch, hence slightly smaller than that of the Series 4. Here are the two "siblings": 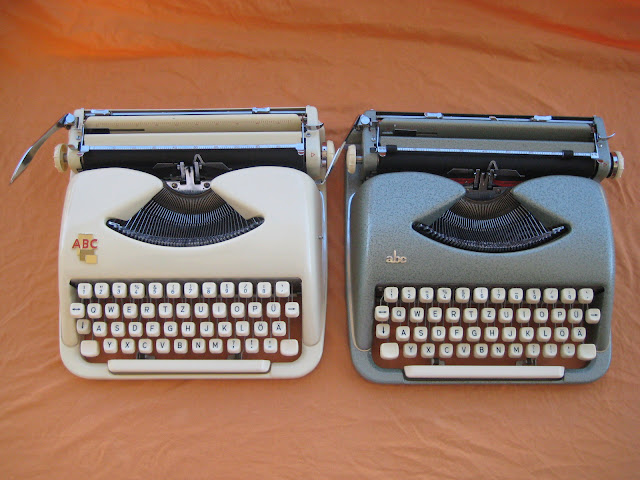 Vanilla and Sage, I call them. Pretty though they may be, each has its own failings - Vanilla is missing a paper support, has some trouble writing in a straight line, and occasionally skips a letter. Sage, while clean and well-preserved, seems to have been well-used and thus has a worn escapement, which leads to margins that refuse to hold and make it virtually impossible to write a straight paragraph. Both of them have backspace problems... I believe it works intermittently on Sage and not at all on Vanilla.

After the cut, my ode/ rant to ABC typewriters, hastily composed on Vanilla: 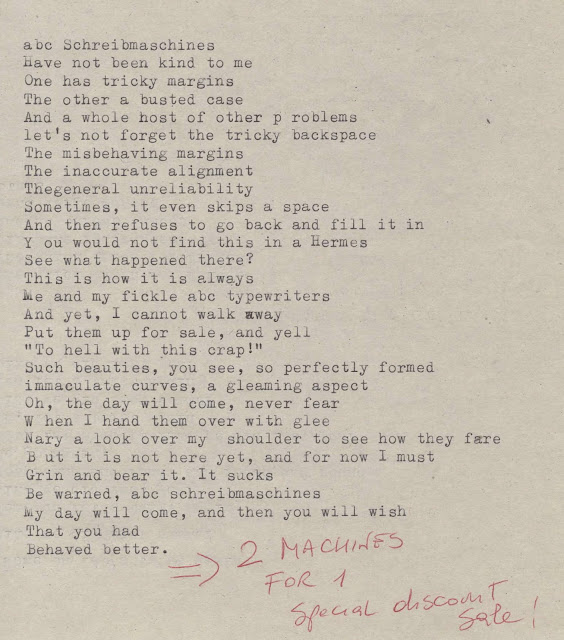 Ignore my husband's graffiti, please. I know he is secretly conspiring to get rid of all my typewriters... I have to be vigilant, I tell you.

For the sake of thoroughness, here is a view of the busted case in question: 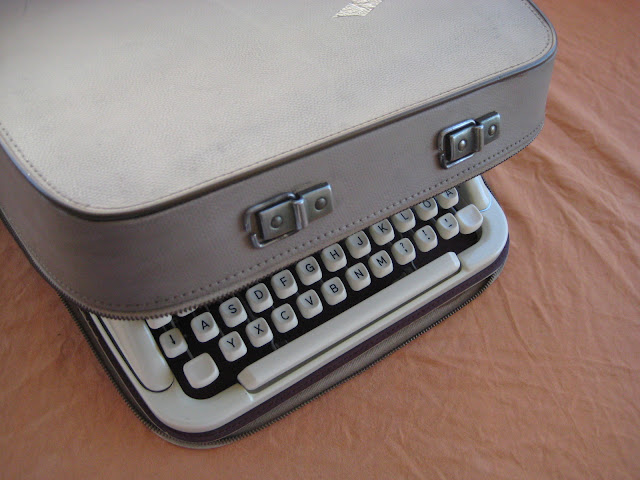 Posted by Adwoa at 9:24 AM
Labels: ABC/ Cole Steel, Collection