Part II of our trip to Fribourg on Saturday, by popular request :)

* * *
So, at the end of my last post, I was admiring the antique 19th century typewriters at the stand of collector Stefan Beck, which included this lovingly-restored Rofa: 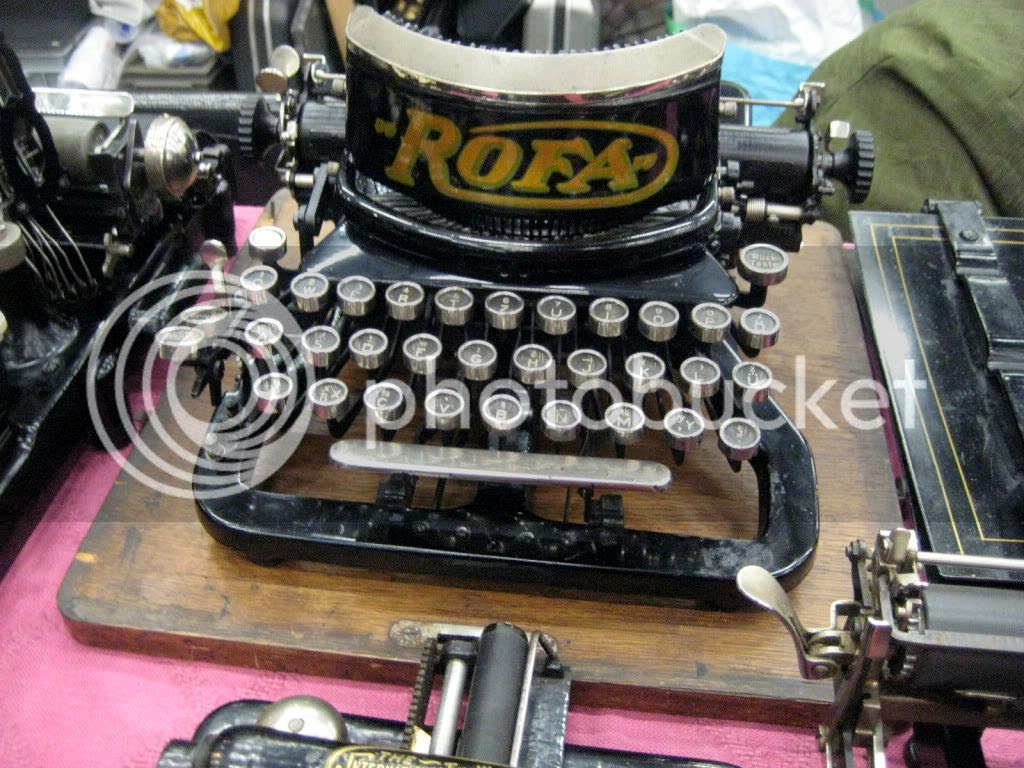 In addition to the older machines that I don't think he was selling, Mr. Beck also had a few typewriters of more recent vintage offered to the general public. First up was this Olivetti Praxis: 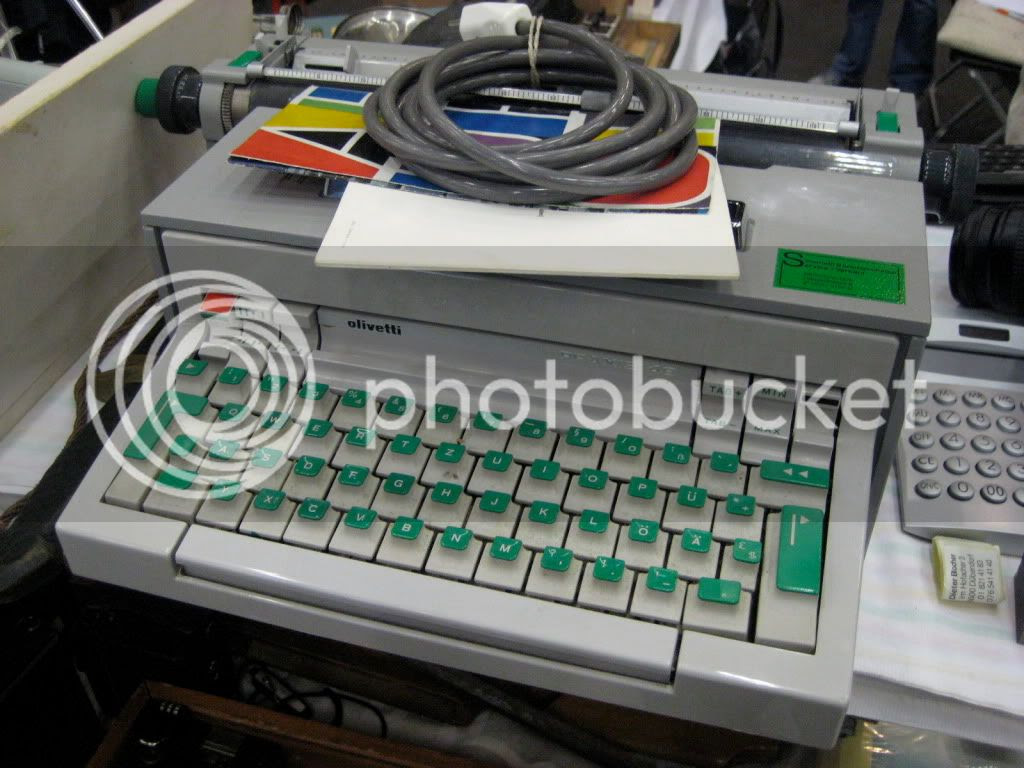 In person, the Ettore Sottsass-designed Praxis is much smaller than I would have thought. Mr. Beck also offered a plastic mint green Hermes Baby with elite font, as well as this immaculate orange metal Silver Reed portable with techno pica font: I'm ashamed to say I lingered over this one for so long that Mr. and Mrs. Beck took me for a total cheapskate who did not want to fork up the very reasonable CHF 20 asking price. That's the thing about this multilingual country: the Becks spoke German, we did not (seeing as how we live in French-speaking Geneva), and so I could not even introduce myself as a fellow typewriter-enthusiast and trade tips on busted escapements. Pity, isn't it? The funny thing is that we spotted some prospective buyers in a similar predicament who, instead of bargaining verbally, wrote down the proposed figure and showed the paper to the seller, who promptly crossed it out and wrote another.
Regretfully leaving Mr. Beck's stand, we came across our usual Shiny Black Hermes: There were also a couple of '50s Hermes Medias and Hermes 2000s, but you already know what those look like. No Hermes 3000s or Media 3s - perhaps they are so common that the sellers did not bother hauling them to this event meant to showcase curiosities? Probably.
A few feet away, I came across something rather interesting: 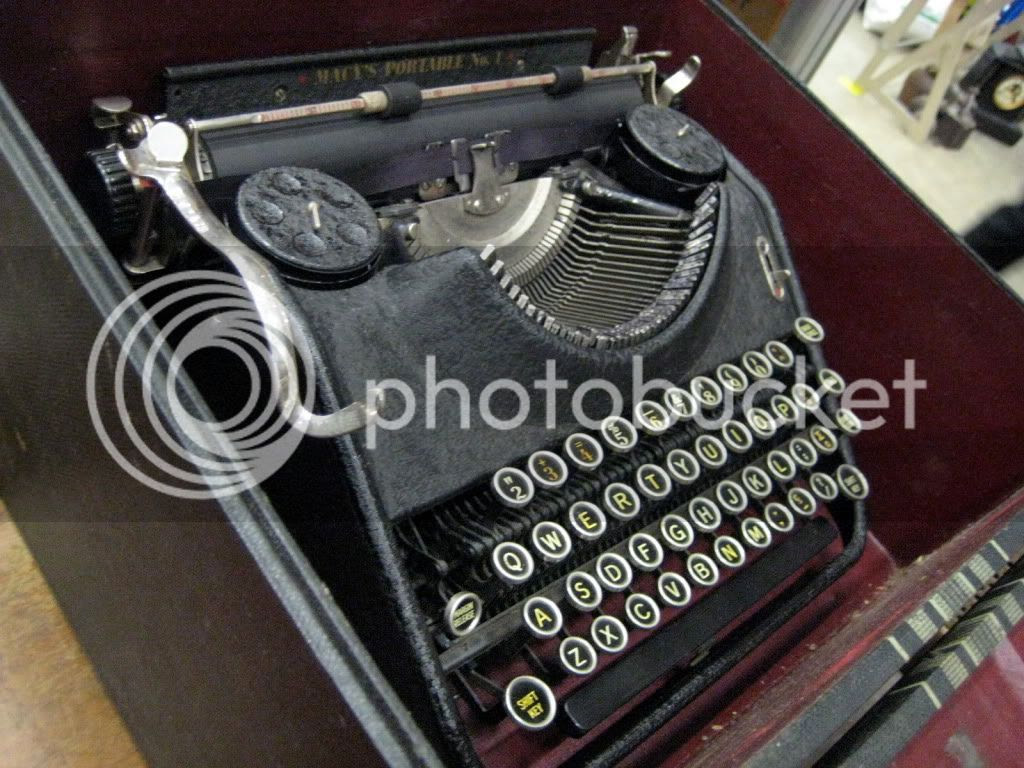 A Macy's Portable No. 1! This has a special keyboard layout - it looks like Swiss-German, except that it is actually QWERTY, and also includes a couple of special symbols, like the Greek sigma. This Macy's Portable No. 1 typewriter is a relabeled variant of the Barr typewriter, which has been thoroughly documented by Will Davis here. Finds like this make me wish I had a huge house with generous storage space so I could be a real collector!
The same vendor was also offering up this '50s Erika 10: 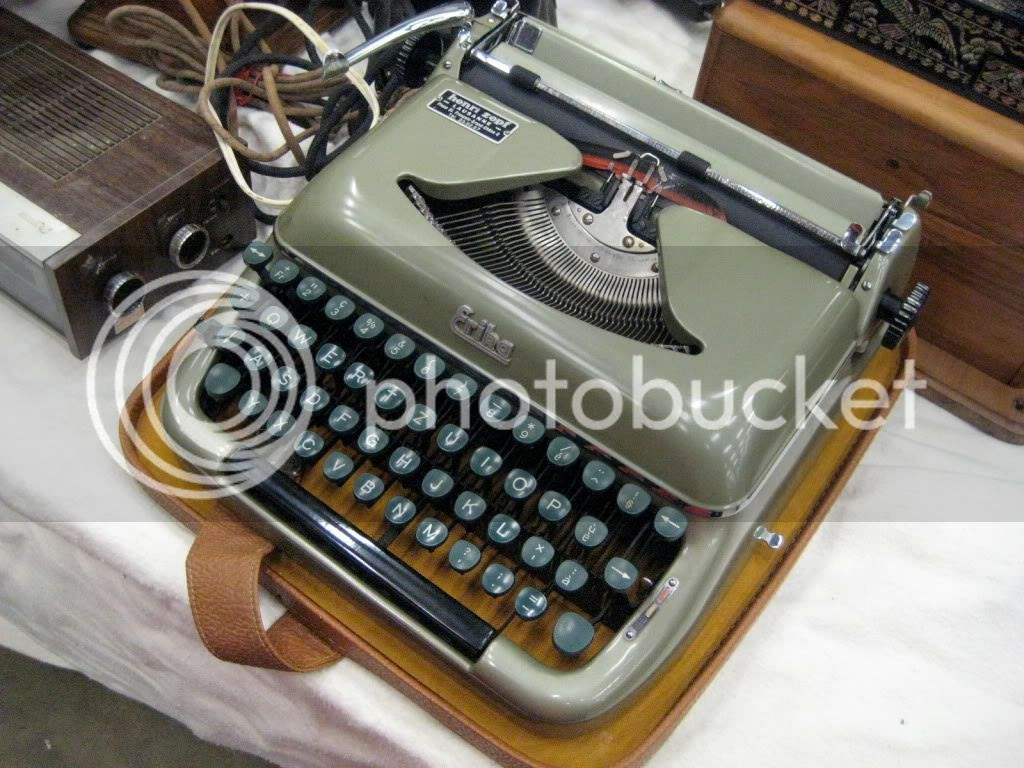 Lovely. I've always wondered what these looked like in person, and I would say they are quite a bit larger than I anticipated. Size-wise, I would compare it to an Olympia SM-3,  although it looks deceptively small in this photo. Speaking of Erikas, we came across another one that had been sold by the same Henri Zopf this one came from: The glass keys on this typewriter were just beautiful - each one as thick as a cough drop. Overall, it was also a good bit smaller than its successor pictured above. Modest asking price of CHF 20.
More typewriters, as well as the one machine I wish I could go back in time and bring home with me, after the cut.
Erikas were quite well-featured, come to think of it. Here is the least impressive of the three we saw, a plastic Daro from the '70s or so: 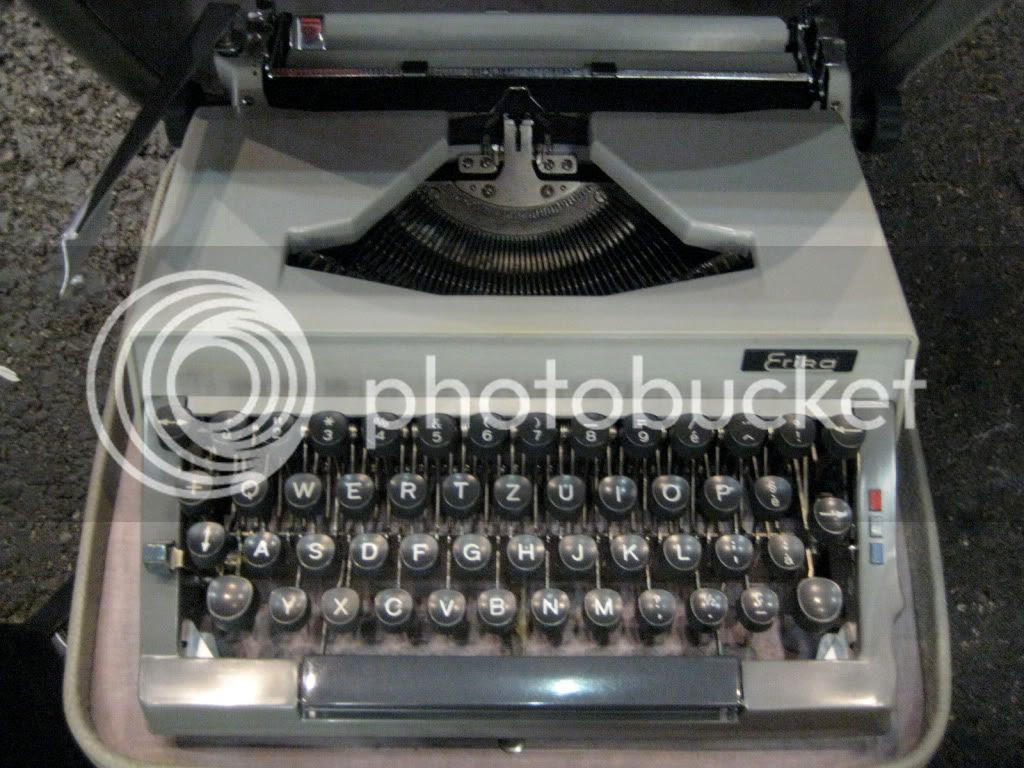 This was one of several machines that lurked discreetly in their boxes, but of course we guessed at the contents and opened them up to look. This one was going for CHF 12.
Again from Germany, a gorgeous burgundy Continental Wanderer Werke: 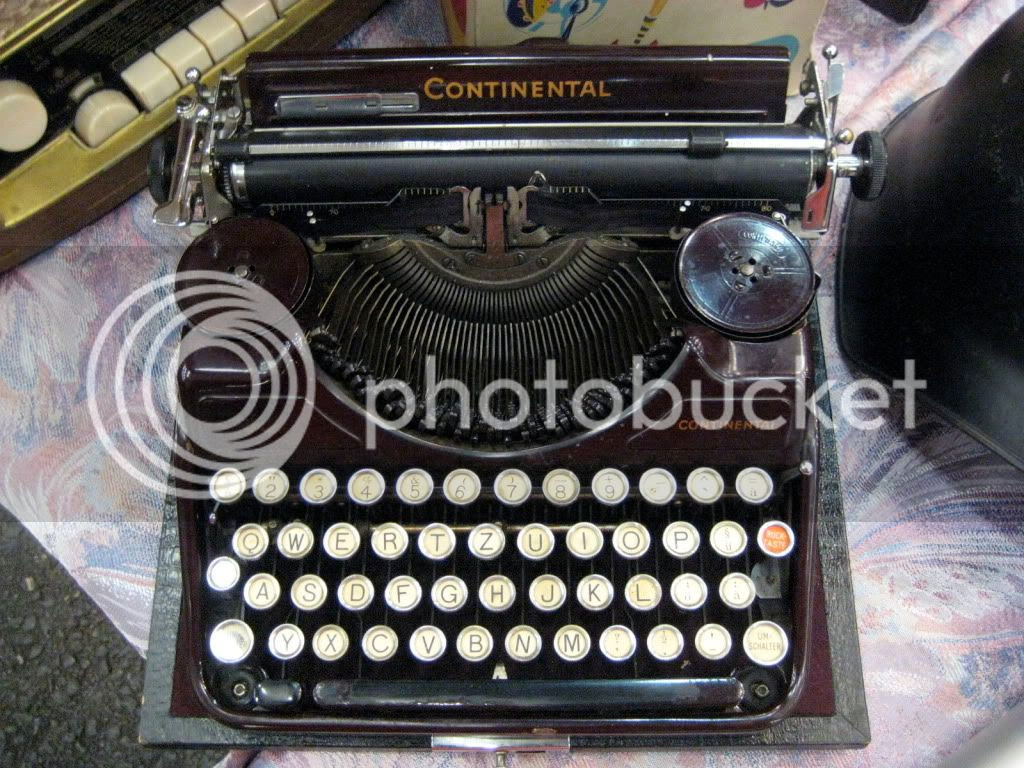 It even seems to have the original burgundy ribbon covers! Paint on space bar is worn though, so it was well-used.
One of the more impressive machines was this Remington Standard 12: 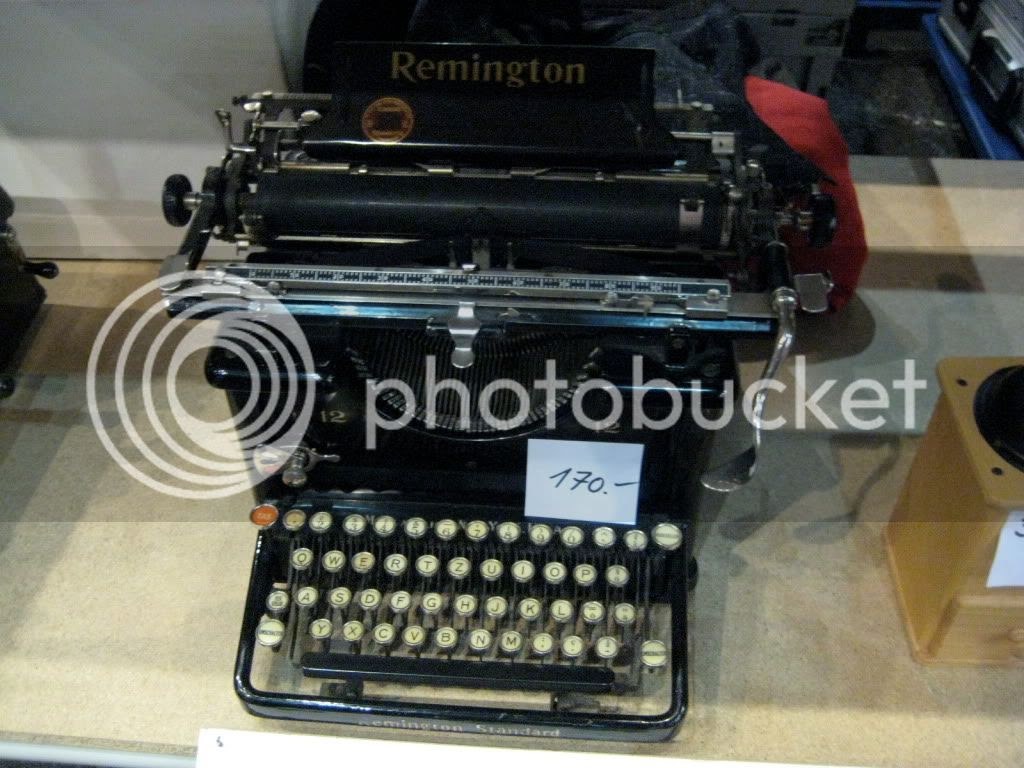 Also large and imposing were a couple of Royal #10s: 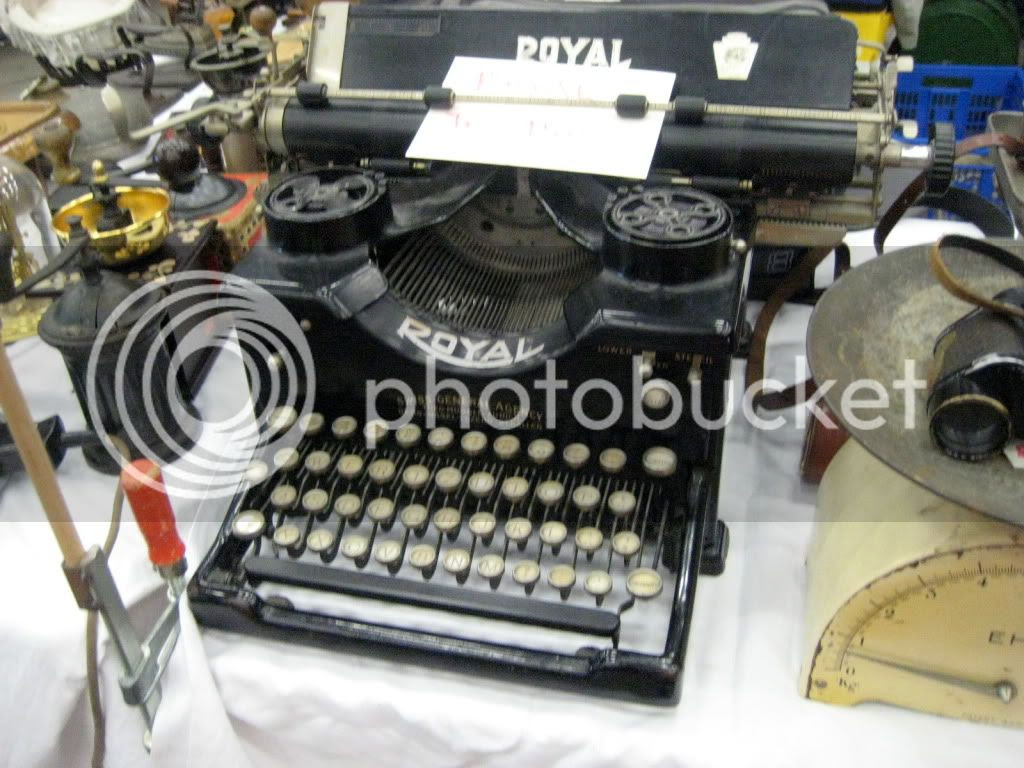 So, now that we've seen more or less everything - which machine would I go back and get right now, if I were to bend my "no more typewriters" rule? Well, it would have to be this one: 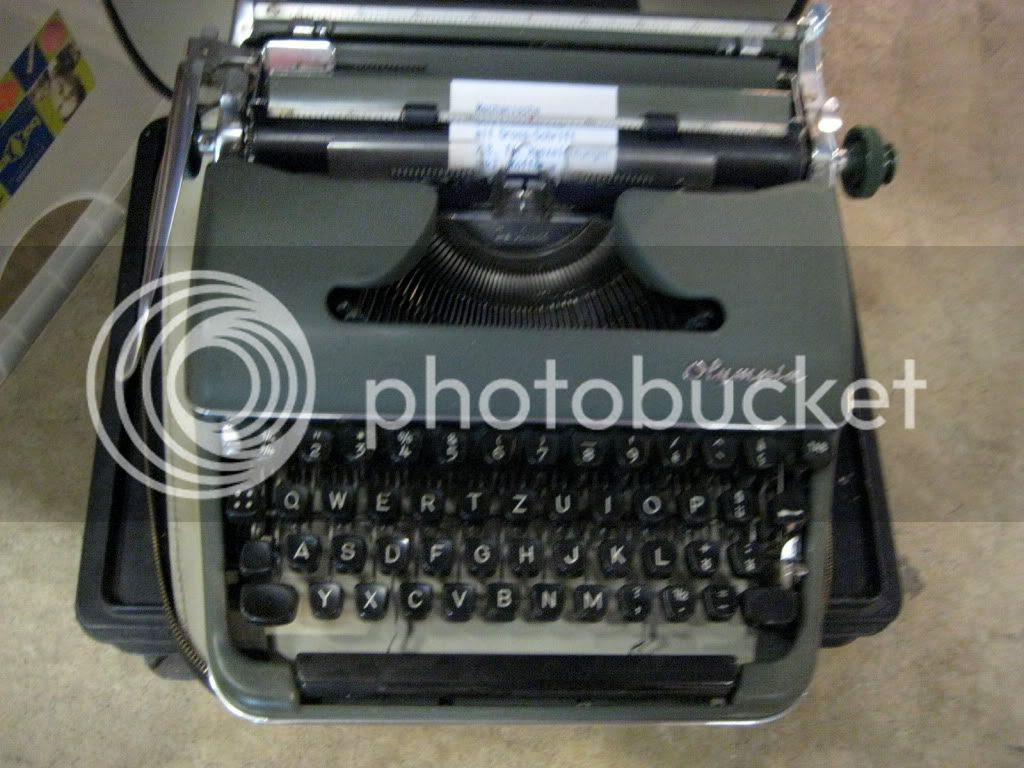 Don't be fooled by the humble appearance of this SM-3. For someone like myself who treasures unusual fonts, this fairly ordinary typewriter had a special surprise lurking under the hood: 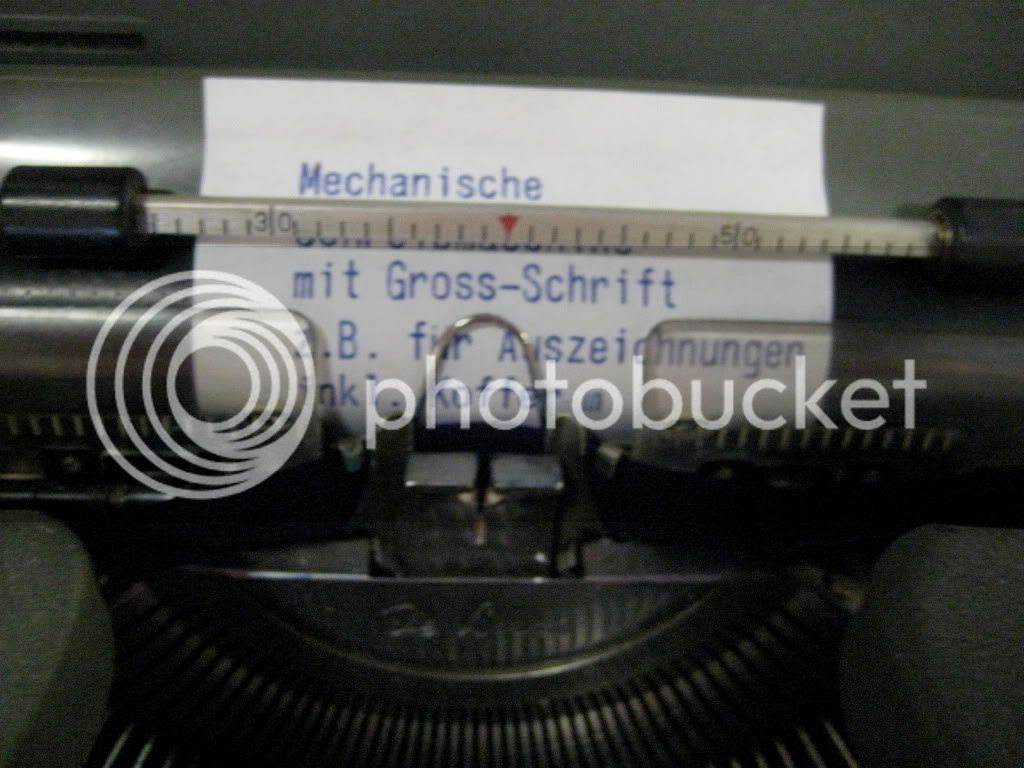 A big, bold, display typeface! Also known in German as Plakatschrift. Just to make sure, I did examine the typebars and I am responsible for that extra "m" after "koffer". While I was smitten with the typeface, the machine itself did little for me - I already have an SM-3, and I'm trying to avoid bigger typewriters these days. In retrospect, I would certainly get rid of my pica SM-3 to make room for this one! The seller's price was a bit on the high side - certainly more than I've ever paid for any flea market typewriter - and yet, considering the rarity of the machine (or at least one with this type style), it was really quite fair. I didn't feel like haggling for a machine I wasn't 100% sold on, and I also didn't want him to go through the hassle of bargaining with me when there would most certainly be someone else willing to pay his price. So I walked away from this one. Sad, I know. This was the first display typeface I've seen in person... let's see how long till I spot another!
* * *
And so it ended. An afternoon very well spent indeed, and well worth the CHF 8 price of admission to spend some time in the company of these antique beauties. Afterward, the sun had come out and we strolled back to the train station, taking in the picturesque scenery of Fribourg in autumn. 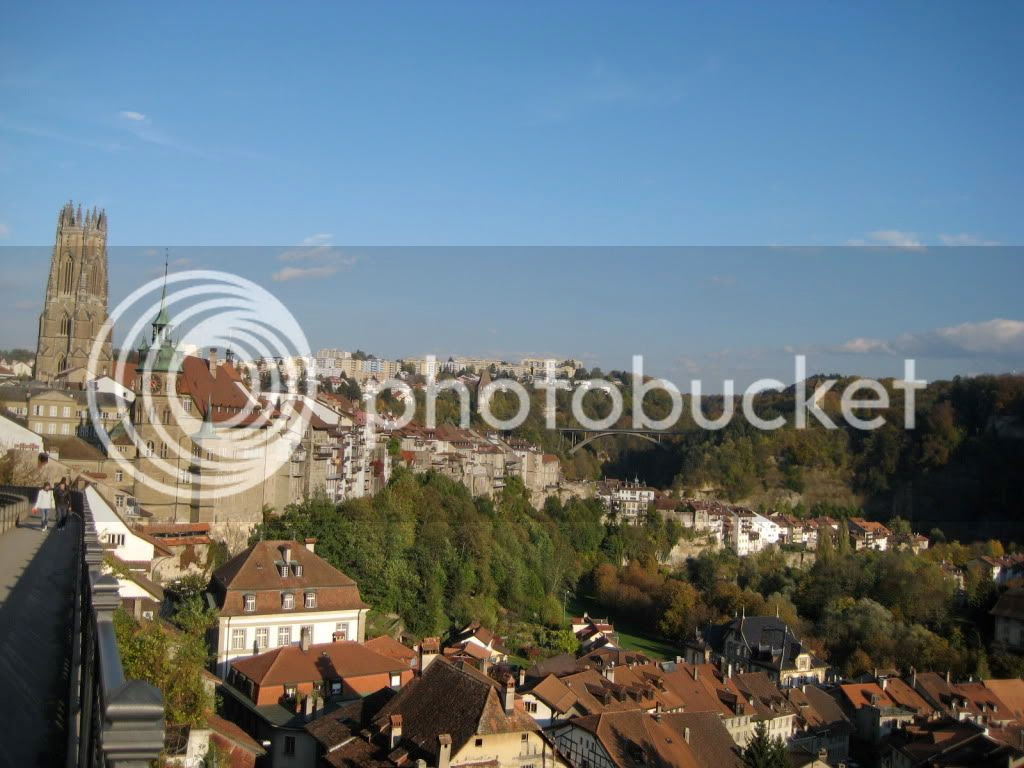