How could I not? The only thing I think of when I hear "Retro Technica" is lots and lots of typewriters! No bias, obviously :). Anyway, I've been looking forward to attending this since I stumbled on their website a couple of weeks ago, and I'm fortunate that Geneva is only about an hour's train ride from the venue in Fribourg. The goal was NOT to purchase any typewriters (again, no space :-( ), just to admire the eye candy and determine if my visit was worth the CHF8 entry fee.  So, did I see anything interesting? Let's find out:

We opted to walk from the Fribourg train station to Forum Fribourg, where the exhibition was being held. The image above is what the building looked like from behind as we approached it. Once we were inside, every stand pretty much looked like this:

A large jumble of retro items of all kinds, like you would find at a flea market. Quite impressive. These next pictures will be a bit grainy because I turned off the flash on my camera and we were indoors. We spotted our first typewriter fairly quickly:

An Adler Junior 2, balancing precariously on its case. I didn't inquire about the price for this and it wasn't listed. It was in fairly good condition, for what it is, but a perfectly ordinary pica font and  plastic case don't exactly pique my curiosity.

Next up is a large Hermes that was being offered for CHF 100. After this, it took a while to spot some more typewriters amid all the radios, sewing machines, gramophones, and record players, but we soon came across a very interesting stand:

Well! Exactly what I had come to see, I would say. More details of this line-up as well as some of the other machines we spotted (about 30 total) follow after the cut: 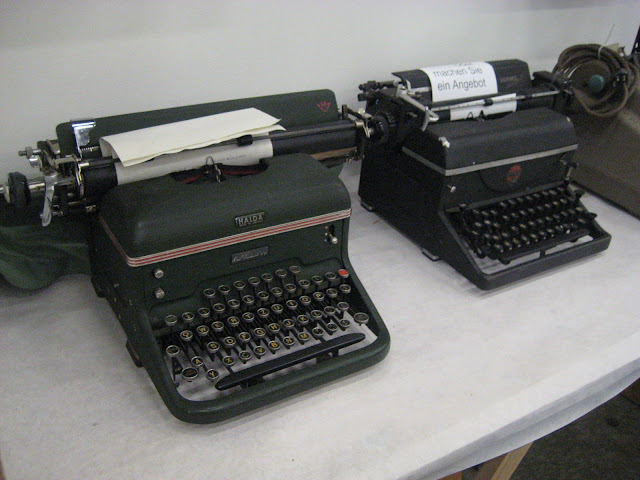 The two standard machines are an immense green Halda and a black Hermes Standard 6 (both circa mid-40s). The proprietor of this stand had put up a sign all but pleading for someone to take the machines, as he had run out of space. You and me both... I guess this is what happens when there's no key-cutting industry: you know this Halda would not last long if faced with a horde of Etsy crafters!

Next to those was a beautiful Rheinmetall that's seen better days. Reminded me of mine, except for the positioning of the ribbon selector. We tried out this one, but the carriage did not move when we pressed the space bar, so it was definitely in need of repair. Pity.

Isn't this beautiful? Ok, fine, it's plastic... but still. This is the last generation of Hermes 3000, made in France. Completely boxy and plastic, not at all appealing - but I feel the beautiful blue color redeems this one somewhat. It also had a nice techno pica font. Next to it are some Selectric golf balls. We saw a few of these, but no actual Selectrics! Go figure.

A vendor right opposite this stand had a few typewriters of his own:

A very nice Olympia SM-8, with 11 cpi font. In beautiful condition, asking price only CHF 10. Next to it, for the same price, was the usual crinkle gray '40s Hermes Baby that also looked to be in fine, clean condition. Sigh!
A little more exploring brought us to the stand of a prolific typewriter collector, who I had never heard of but who apparently runs a museum in Pfaffikon, Zurich where he displays many rare pieces including a Mailing Hansen Writing Ball:

Those are his hands resting protectively on his treasures. However, I went back when he was more relaxed and took photos of each individual typewriter, not all of which I recognized immediately.

Klein-Adler, dating from circa 1912 according to my only typewriter reference book (Wilfred A. Beeching's "Century of the Typewriter".)

A Blickensderfer (not sure exactly which as I didn't look too closely). Going to my reference book, this looks like the model 6 of 1896.

An impressive, gleaming Columbia Bar-Lock (circa 1888). Evidently the centerpiece!

International No. 5 typewriter by the New American Typewriter Company in Chicago, produced circa 1906. More information here.

Here is one from 1897 manufactured by Edelmann, and a description (in German) is available on the collector's own website.

I'm not sure these machines were for sale, so much as Mr. Stefan Beck (that's the collector's name) was using them to advertise his museum. However, a "for sale" list on his website gives the price of an Edelmann as 900 euros, so that should give you some idea.

Whew! Stay tuned for Part II of Retro Tech goes to Retro Technica. Writing up all these pictures is more time-consuming than I thought it would be! Besides, this post is getting rather image heavy. More to come in a couple of days :-)
Posted by Adwoa at 3:52 PM
Labels: Eye Candy