It is fitting that I round up the year with my 60th post, which makes this the blog that I have updated the most frequently (my first post was in July). It has been a great year for my new-found obsession with typewriters, during which I have managed to obtain quite a few interesting machines and find a way to focus the collection from everything I stumbled across to a few carefully selected portable typewriters. In the process, I have also been able to acquire a wide variety of different typefaces (nine at last count), which I will explore on the blog next year.

From an Excel spreadsheet that I put together a few months ago, I realize that over the course of the past seven months, I have brought home exactly 50 typewriters! Some have since been sold, given away, or passed on to the Salvation Army (irreparably damaged), but that number is much too high in any case. Accordingly, I have shown more restraint in the past three months, with a resulting TPM (typewriters per month) of 3. Which goes to prove that I was a little bit mad in the beginning, if you ask me. Besides, I find my curiosity satisfied merely by taking a look round the flea markets and thrift stores every month at what is available - I no longer feel compelled to go to the trouble of carrying home a new typewriter unless it has a special typeface, or it is rare and ultra-portable.

In 2011, Retro Tech Geneva will continue in much the same manner as today: a couple of typecasts a month (with additional pictures), at least one typewriter featured every month (until I run out), and a run-down of machines "spotted" for sale in the wild. I am also planning to put up some of the ephemera from the various typewriters, which I have not done so far because they tend to be in French and/or German. However, the images are universal so there is at least that. I shall also put together an illustrated guide to the typefaces I have, from elite and pica through to techno, script, and display/ bulletin. As a reader of the blog, please chime in and let me know if this sounds good as well as what you would like to see more of.

To conclude, here is the December round-up of typewriters spotted for sale in Geneva: 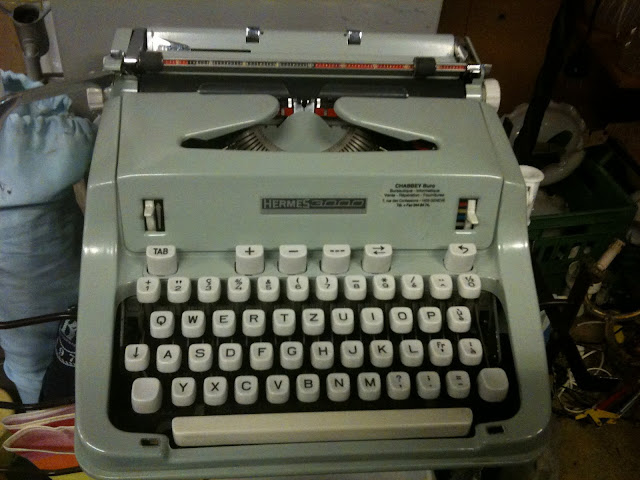 A boxy metal Hermes 3000 in the thrift store. I was so certain this would be a script typeface because of the +1 key, but it turned out to be a false alarm.  All was not lost - I then proceeded to nick the two brand-new spare ribbons that had been tucked into the machine and purchase them for $1 - the cashier barely knew what she was looking at. 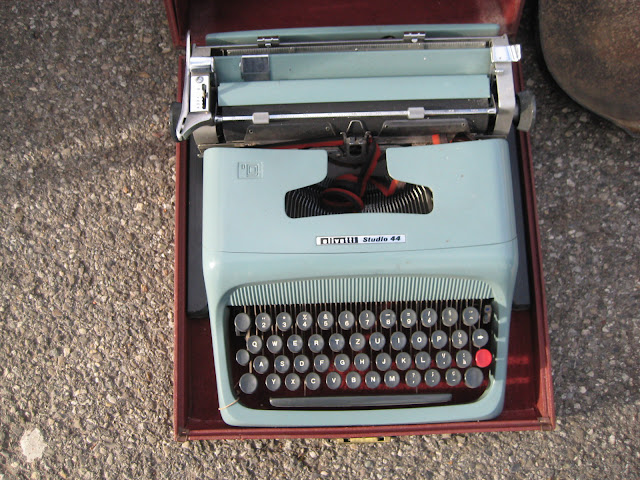 Olivetti Studio 44 at the flea market. Judging from the tangled mass of ribbon, I suppose some kids had gotten to it... or it could also have been a few clueless adults. 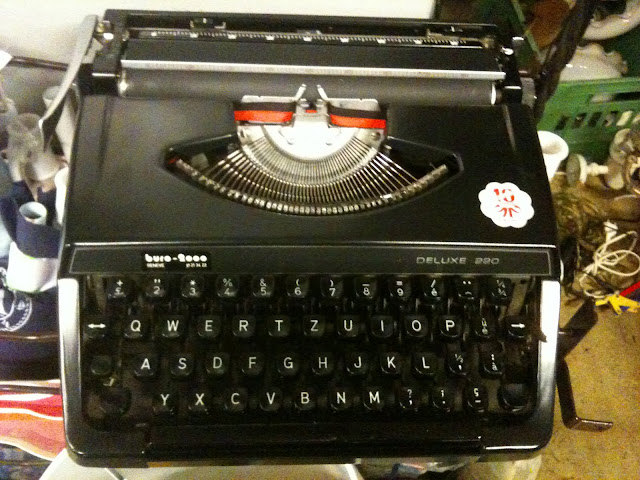 Brother Deluxe 220 at the thrift store: this one had two nice surprises, a solid all-metal body and a techno typeface. 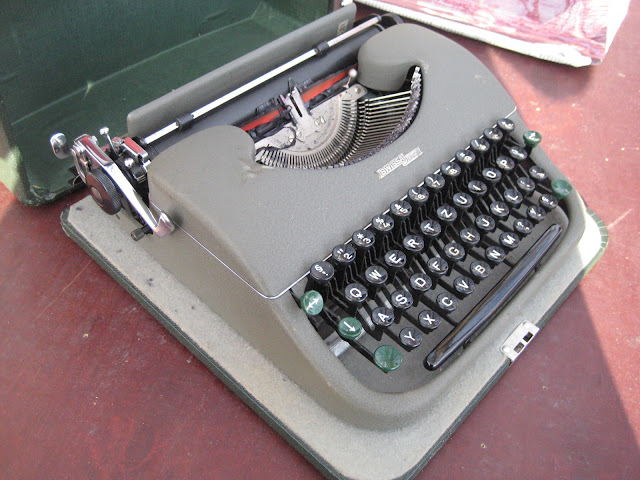 Swissa Piccola at the flea market - this was a cute little machine and the seller, who offered it for $30, was very proud of it (he had not seen one before and found it quite unusual). It was in great condition with a clean case that also contained the original manual and warranty. 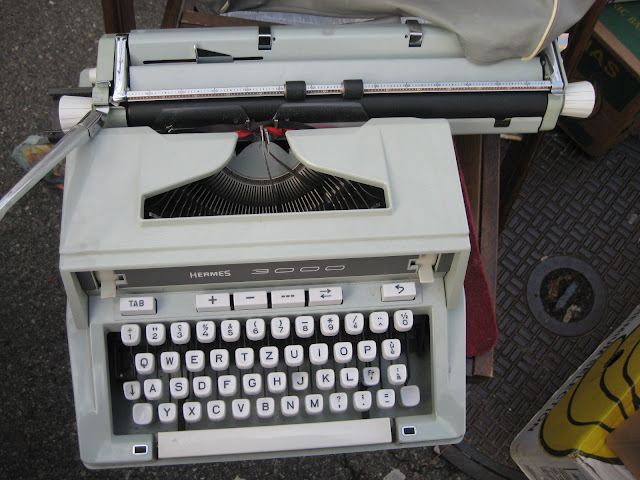 Boxy plastic '70s Hermes 3000 with wide carriage - it is probably hard to tell in the picture, but the numbers on the paper scale went from 60 to 0 and then to 60 again, so this was probably intended for writing double pages. 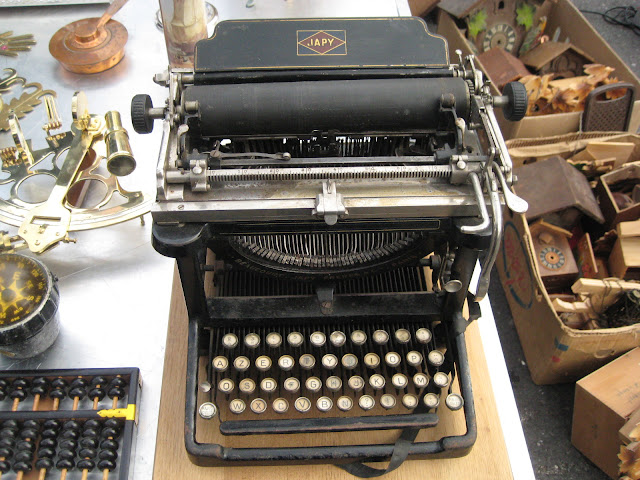 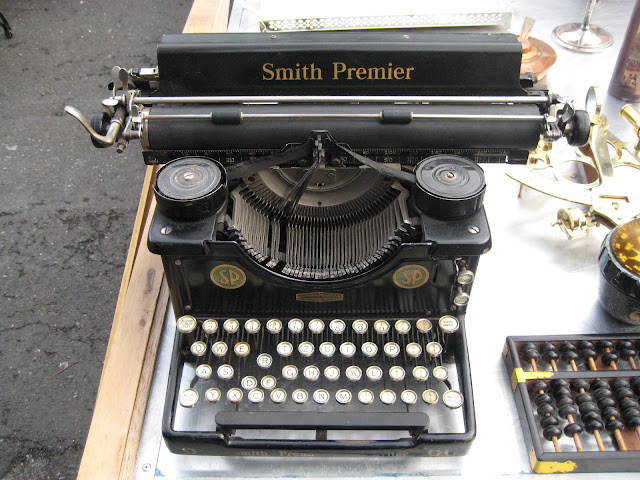 Smith Premier from the same period 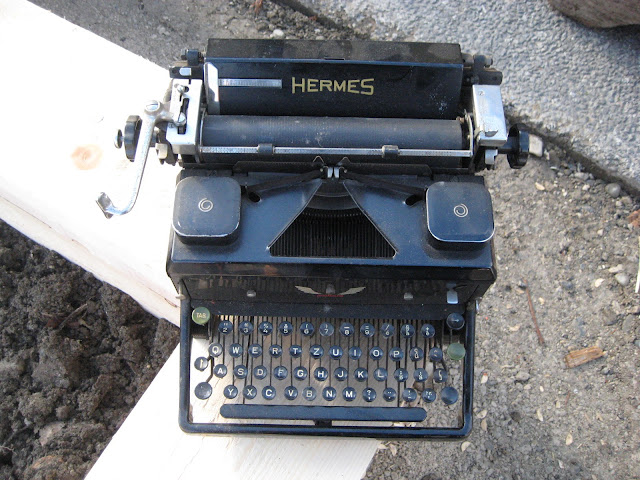 And finally, an Hermes Standard 6 perched on the wooden edge of a flower bed.
Best wishes to all for a restful break and a very Happy New Year!
Posted by Adwoa at 7:07 AM
Labels: Eye Candy