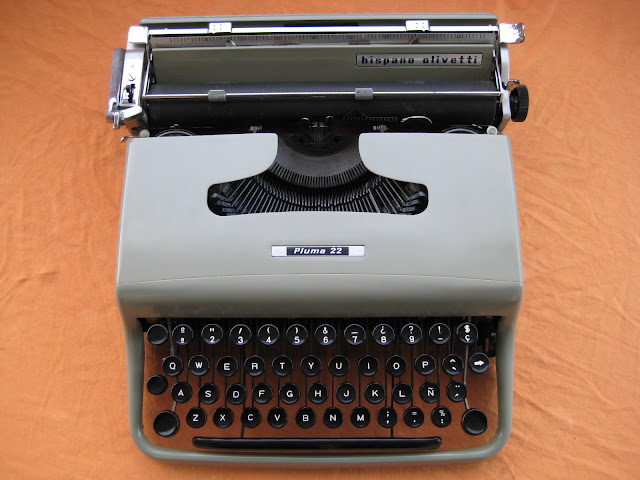 All the talk of Olivetti in the comments of my last post had me reading up on the history of Olivetti SpA today - as the only typewriter manufacturer that has managed to evolve successfully and is still in operation in the twenty-first century, selling telecommunications and printing equipment, I wanted to find out how they did it. After a few minutes, my eyes glazed over reading about the various crises, mergers and acquisitions, but I unearthed one fascinating nugget of information: the company was plunged into peril when Adriano Olivetti (son of founder Camillo Olivetti), who led the company in the 30s, 40s and 50s, died suddenly in 1960 during a train ride from Milan, Italy to Lausanne, Switzerland. 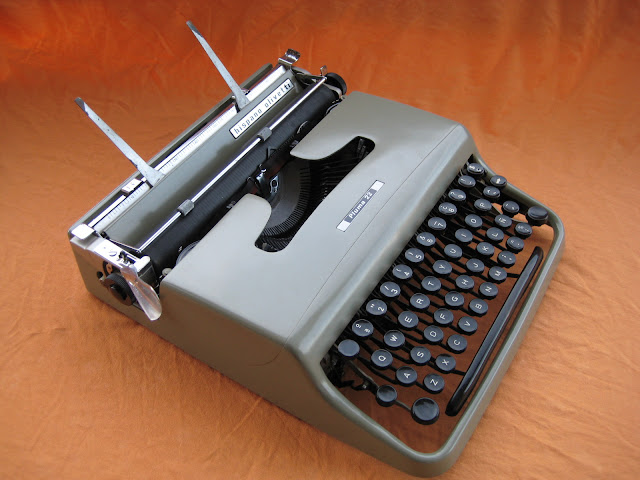 I also learned that the Lettera 22 typewriter was first introduced in 1950, during Adriano's tenure. In 1959, coincidentally in the year that Olivetti acquired Underwood, the Lettera 22 was named by an international jury of designers as the best of 100 products in the previous 100 years. The late 40s and 50s under Adriano's leadership were the golden days for Olivetti, with very successful products such as this portable typewriter, the Lexikon 80 standard typewriter, and the Divisumma 24 calculator. The Lettera 22 differs only slightly from the subsequent and much more widespread Lettera 32, which was offered primarily in a turquoise color, with a boxier build and square keys. 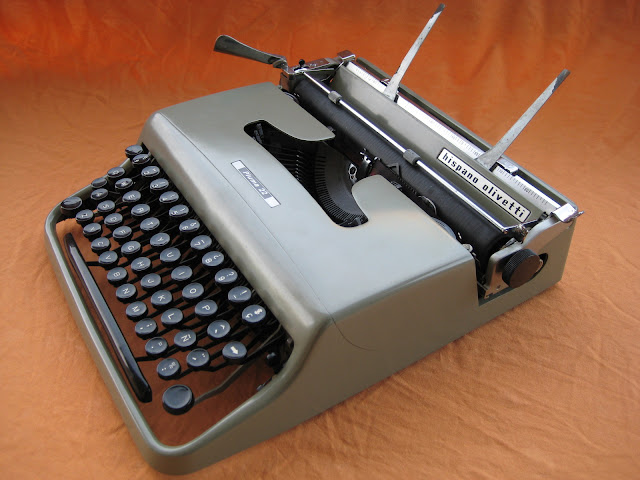 What we have here, as you may have noticed, is labeled Pluma 22, but it is the exact same as the Lettera 22. It was built in Spain by the Olivetti plant in Barcelona sometime in the early fifties (hence the absence of the red tab key, which had not yet been added). Hispano Olivetti indicates its Spanish origins, as does the keyboard which contains the upside-down question mark and the N with a tilda. 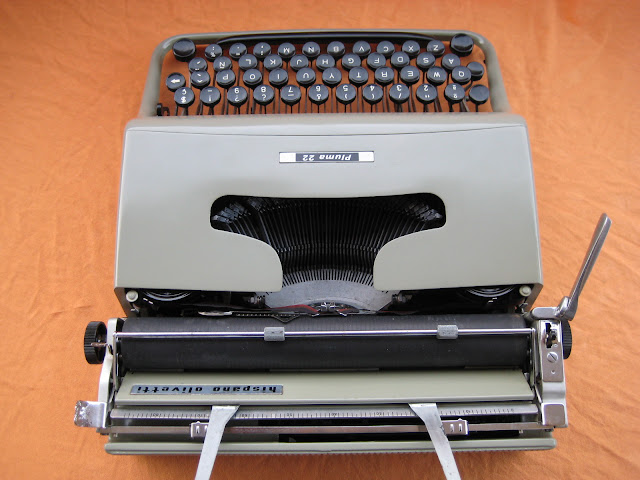 The story of how we came by this compact beauty a few months ago is a great example of synchronicity, a concept I have learned about from Deek. In the few weeks prior, my husband (hereafter J) had been doing some research to identify his ideal typewriter (none of the ones we had really qualified), and came up with a list of requirements: 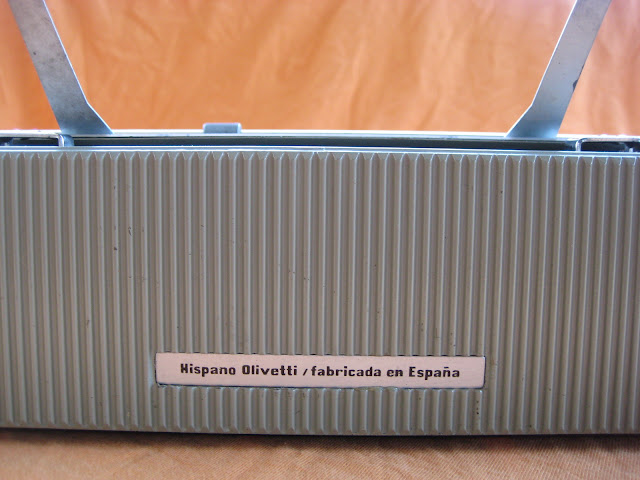 After making this thorough list, the only typewriter that qualified was a Lettera 22 - specifically the Spanish-made Hispano Olivetti Pluma 22. But where could we find one? There was one on offer from a seller on eBay Spain at the time, but it was pricey and shipping to Switzerland would cost almost as much as the machine itself. The auction was set to end on a Sunday, I think, but the day before, on a Saturday, I suggested we make an excursion to the flea market. 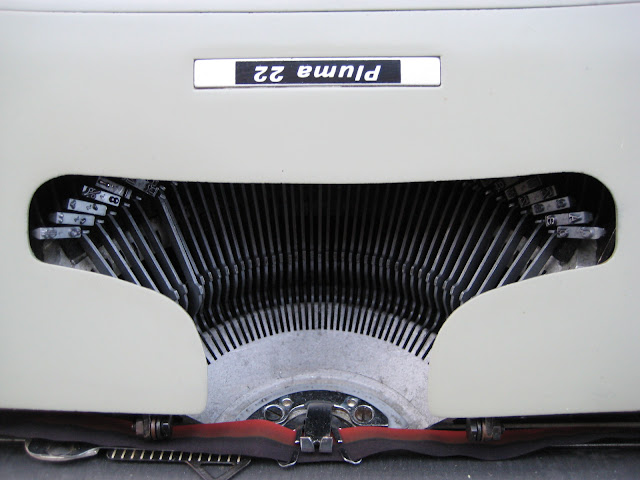 Well, you can guess the rest. The flea market in Geneva has few portable typewriters, and when they do appear, they are mostly Hermes. It is rare enough to find an Olivetti portable - I have seen three in the past year - but to find a Spanish Pluma 22 on the exact same day that we were considering purchasing one from eBay? The stars lined up perfectly for this one. 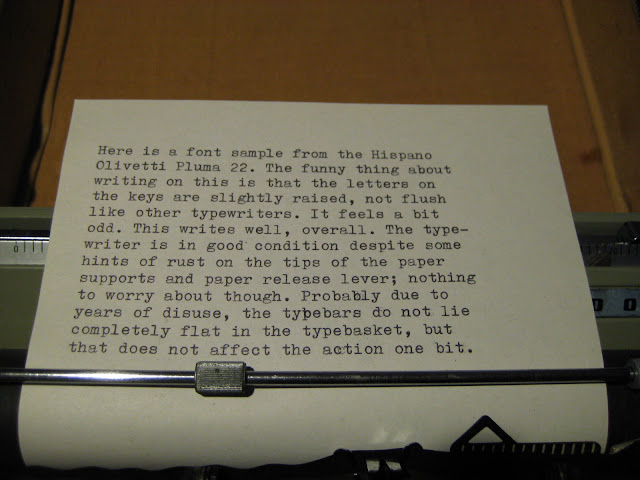 J pulled out his wallet as soon as we examined it and verified that it was indeed working and had the desired pica font, but I made a counteroffer anyway and the seller (despite an evil glare) gave us $5 off. 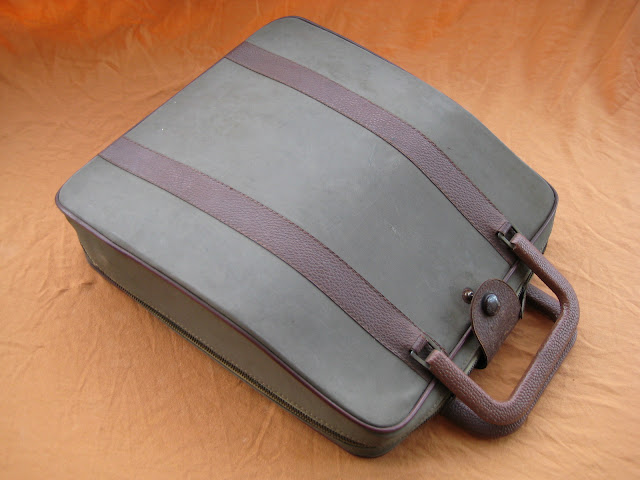 Here is the case - a bit ragged, but both zippers work and the handles hold firmly. It also came with original Olivetti cleaning brushes, the manual, and a soft vinyl typewriter cover. This was definitely one of our more memorable finds; it's great to come across something you've been looking for and finding it in person fosters a rather special connection as well.
Posted by Adwoa at 10:01 PM
Labels: Collection, Olivetti/ Underwood