Typecast: A Treatise on the Smiley Face :-) 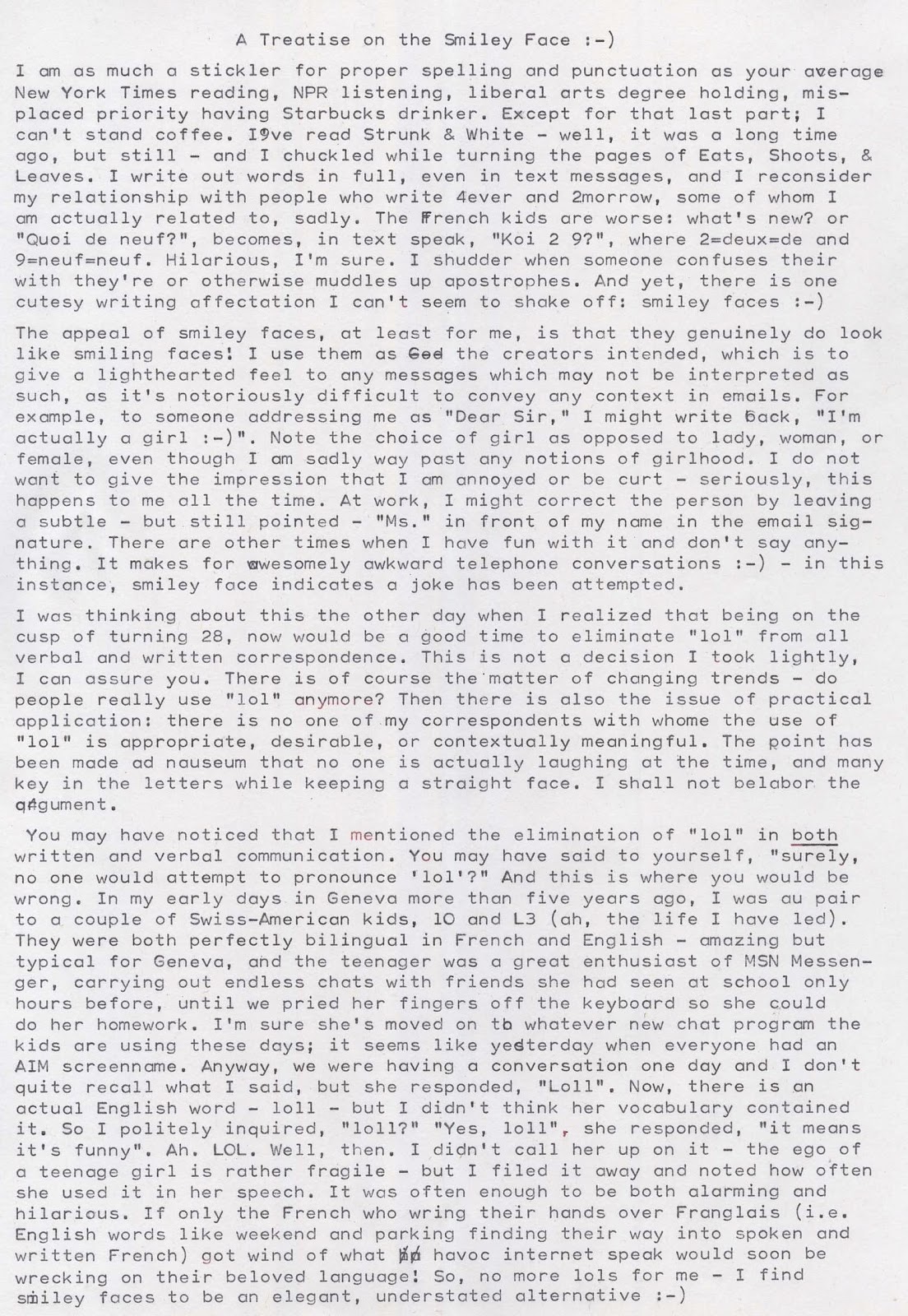 Posted by Adwoa at 7:23 AM 18 comments:
Labels: Typecasting 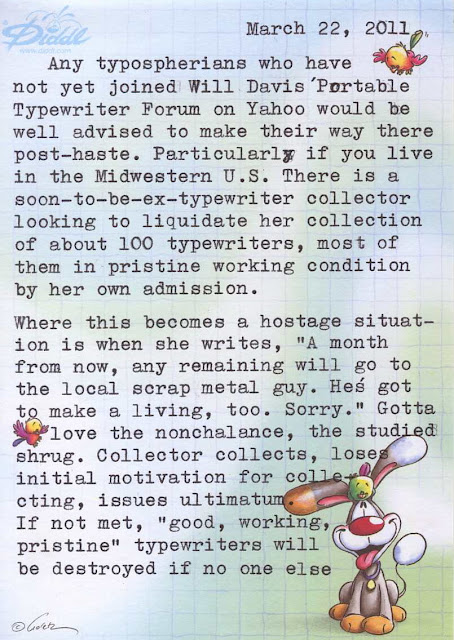 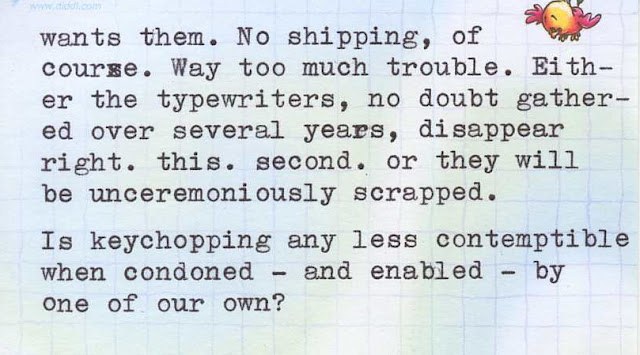 Overall, I would say things turned out pretty well. Although I know it's purely superficial, I am still hoping to find a parts Hermes Baby machine for the ribbon cover (or otherwise nick one from a fellow collector). I already contacted the Typewriter Museum in Lausanne, but I haven't yet heard from them so I doubt whether they can help... in any case,  we just might come across another of these, so I'm not overly worried. A great birthday find that I'm very happy with!
Posted by Adwoa at 9:50 PM 16 comments:
Labels: Collection, Hermes, Typecasting

I uncovered an awesome typewriter find at the flea market over the weekend and proudly hauled it home - boy, it has been a long while since my twice-monthly visits bore fruit. However, I have been slacking on putting up typewriter manuals, so it is time to post up the ephemera from this Swissa Junior. My post on the new acquisition will have to wait till later in the week.

Here is the front and back cover, with a sketch of the factory in Murgenthal. The umbrella-like symbol is actually William Tell's bow and arrow - or so I have been told - and it was included on all genuine Swiss-made products.

Getting the typewriter out of the box, freeing it from the base, and rolling in some paper.

Margin stops, margin release key, and a lever to unjam the  keys (now I know what that's for!).

Spooling in the ribbon, ready to start typing!

Exhaustingly detailed instructions (I can only guess, I don't speak German) on how to get your machine back on the base and lock the carriage for transport - upright only, please.

Anatomy of a Swissa Junior

While this warranty has long expired, of course, it is amusing to see how many caveats would disqualify virtually all typosphere members from redeeming the warranty (even if it was still valid). Example: Rubber parts are excluded (ossified platens being the bane of our existence); bad handling and insufficient packing void the warranty (so any machines purchased from eBay are automatically disqualified); anyone attempting to repair or modify the machine voids the warranty (and we love to tinker!); and the warranty is only valid for the first purchaser (I think this is the final straw, really).
Posted by Adwoa at 11:10 PM 3 comments:
Labels: Instruction Manuals, Swissa

Keychoppers will not be around much longer, I meant to say, especially as this revolution picks up steam. At least in the States, I think; now I should get to minding my own pot on this side of town. There don't seem to be any keychoppers in Switzerland (yet), thankfully, but having found a Selectric in the trash once, I wonder what else is being discarded...
Posted by Adwoa at 9:08 PM 14 comments:
Labels: Typecasting

Typecast: The wisdom of crowds (and an ink review)

Now that the Dunas has been inked with Black Swan (using a syringe to fill up an empty cartridge), I love it and use it often. Applying a little pressure produces quasi-calligraphy as shown, although the empty spots are where the ink didn't keep up with my writing; I don't mind though. Far from ruining the nib (it's not a very expensive pen, in any case), it has now become a very wet fine (shows off the ink nicely) and does not dry out when left uncapped for a few minutes.

Paper towel test revealing "black swan" with a halo of "Australian roses". A pile of steeped hibiscus tea in the center for comparison. I don't drink it often, but it's a real treat when I get around to making it and I like that it seems like something one of my literary heroines, Mma Ramotswe of the No. 1 Ladies Detective Agency, would do - sit on her porch in Botswana with a steaming mug of hibiscus tea (as a change from her usual bush tea, that is).

The funny thing is that after writing this review, I wrote a line of Black Swan and compared it to a line of Diamine Syrah, and they are virtually identical! No wonder I liked this so much. On a paper towel, the Syrah is quite boring - the color is even throughout.

Now I am all "burgundied" out... off to rest my eyes with some blue. I have a couple of letters I should get to writing!
Posted by Adwoa at 1:09 PM 6 comments:
Labels: Fountain Pens and Inks, Typecasting 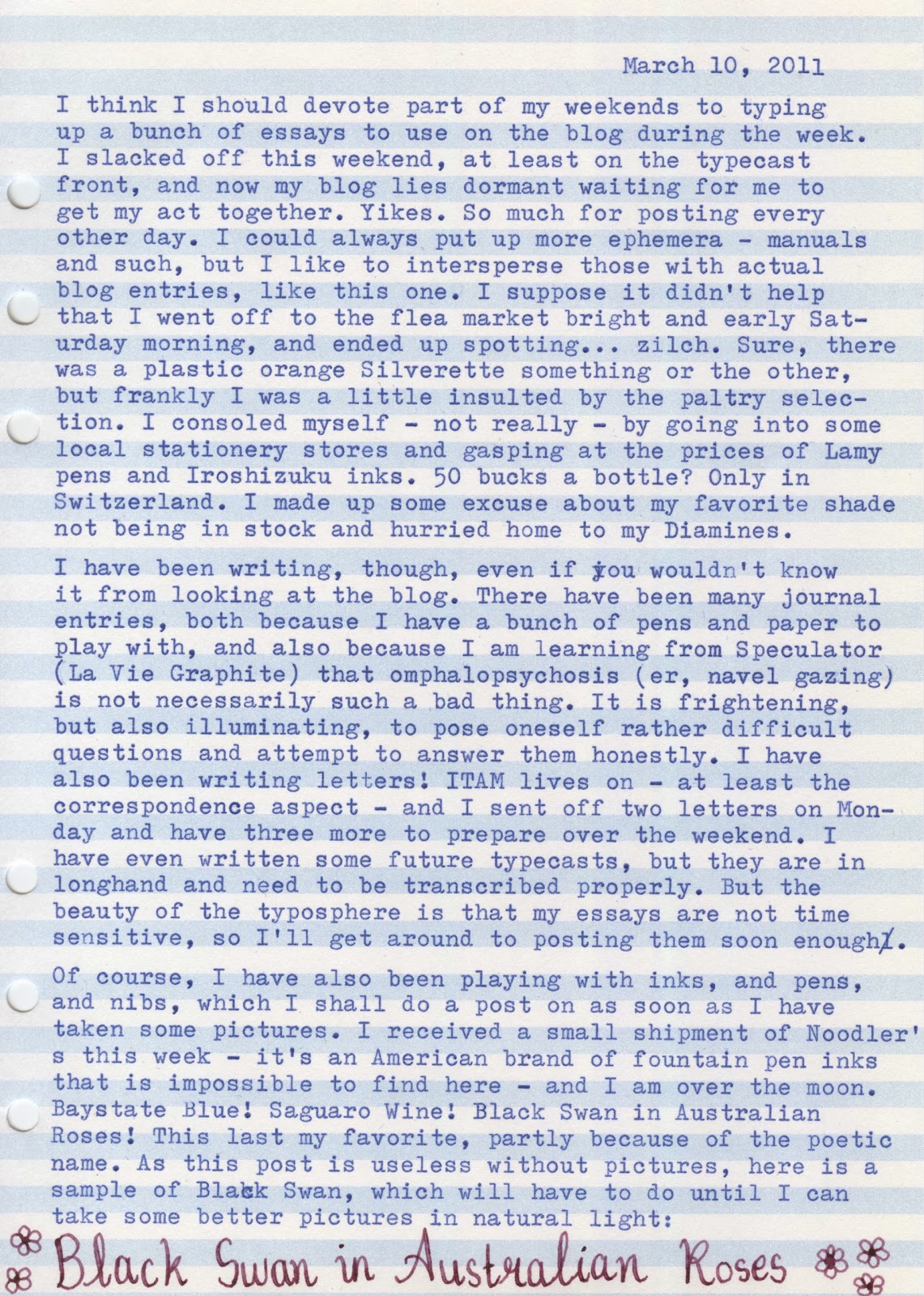 And speaking of roses, it looks like spring is arriving in Geneva! It has been sunny and warm these past couple of days (of course, on weekdays when it does me no good), and I noticed some buds already making their way out on the tree branches. As good a time as any to share some of my favorite pictures of spring (we aren't quite at this stage yet, but will be in a couple of weeks):

March is here! My very favorite month of the year - snow melting, spring arriving, days lengthening, and a birthday! (*hintmoredetailsoncontactmepageendhint*) So, what better time to feature a bright, cheery typewriter? After ogling Richard's parade of pretty Sad Face Vosses (a misnomer if ever there was one), I would like to add this Annabella to the cotillion of fetching two-tone typewriters.

The Annabella is not a particularly rare machine; it appears to be a version of an existing Antares typewriter produced in this color scheme for the German market (I've only ever seen it on German eBay and with a German keyboard so far). David and Georg both have Annabellas, and I could only stare at their pictures for so long before going off on a quest of my own. I was hesitant to order from Germany, what with the troubles of international shipping, and when this appeared on a local Swiss website... well, it was destiny. I wonder whether that bidding war was destiny too... 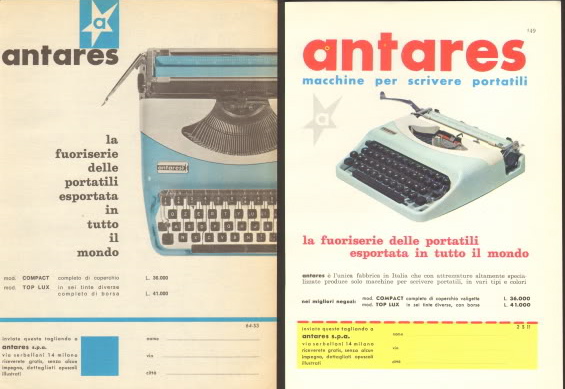 An ad for the Italian version of the typewriter. Also, Georg has kindly put up a photo set on Flickr comparing the Annabella to another Antares portable of the same era - while they are slightly different externally, the mechanism is exactly the same. A comparison of the Antares Parva with the Annabella reveals many design similarities as well.

(The lever on the side changes the direction of the ribbon.) I used to have a typewriter quite similar to this, an Underwood 19. It was... eh, just ok. It typed well enough, but the key tops were made of a hard plastic that rattled in an unnerving manner and felt rather flimsy. It was unremarkable in every way, a beige plastic, carriage shifted, little mouse of a typewriter - with the one redeeming feature being its incredibly slim profile.

This is one of a few typewriters, like the Rooy, that I bought just so I could have one and look at it. In that respect, it works perfectly well! It spends all day in its cozy case, and occasionally comes out for a photo shoot. I acquired this knowing that it would have many of the features that I found less than convenient in the Underwood 19, including rattly key tops and carriage shift, but the all-metal body and stunning color scheme more than made up for it, so I forged ahead anyway.

Look at those cute rabbit-eared paper fingers! Reminds me of nothing so much as Pikachu...
I haven't gotten around to making a type sample, but I shall add this into my typewriter rotation so you should be seeing a typecast from it soon. In any case, it's a continental elite typeface, 11 characters per inch. And finally, the case, which is very similar to that of the Lettera 22, and is just as handbag-like: