Aarberg flea market: all talk and no typewriters 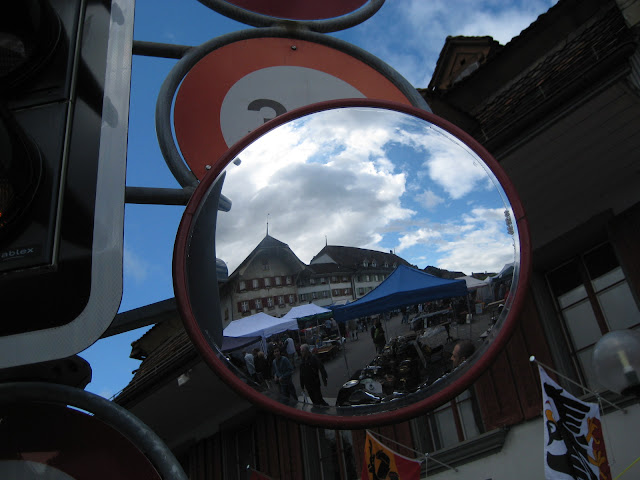 Held twice a year on the last weekends in April and August, the Aarberg flea market bills itself as "one of the largest" in Switzerland, assembling flea merchants from all corners of the country in an event that has the atmosphere of a fair, complete with food stands every few feet. Attendees hold beer and bratwurst in one hand as they peruse antique wares with the other. Rather convivial, except... 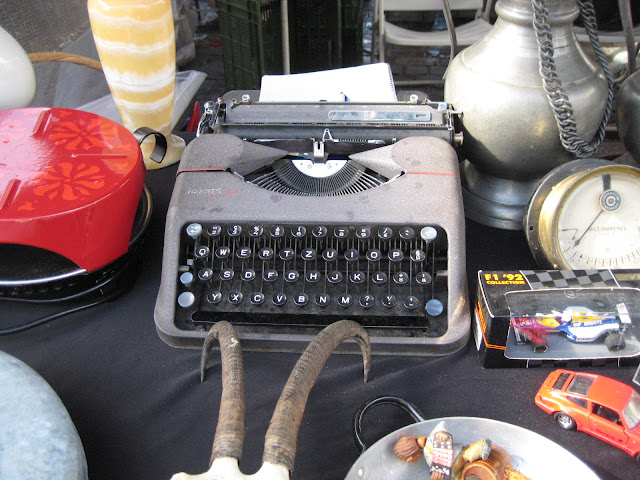 ... if you're unfortunate enough to get there on the one day it rains, as happened to us on Saturday. To be fair, it cleared up fairly quickly after we arrived, but the clouds never left and the sellers glanced nervously at the sky every few minutes, shielding their wares with heavy sheets of plastic. It was coming down quite a bit when we first arrived, so I couldn't see much under the plastic and from what I could see, no one had any typewriters. I was about to turn around in despair when I spotted this, a Hermes Baby that had seen such vastly better days it cowered under my disapproving glare. 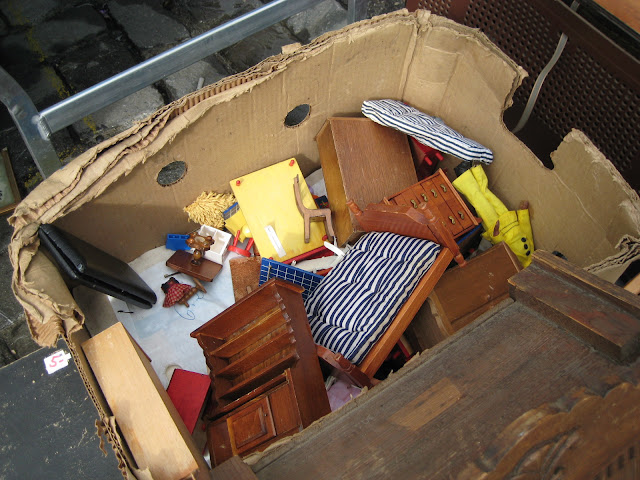 The fair was in general a bust for typewriter fans - who should really be attending this thing is doll collectors (just about every stand was overflowing with eerily realistic dollhouse furniture). There was also a lot to see for those interested in horology - watches and watch parts made up every fourth stand or so. 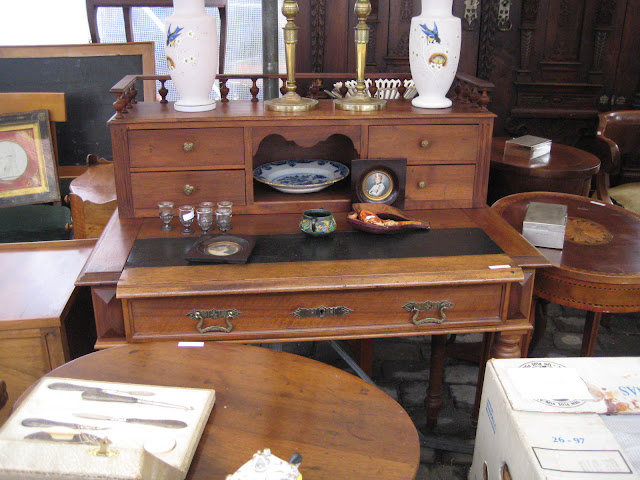 While typewriters were not easy to spot, I did manage to gawk at many fine pieces of antique furniture, including several secretaries like this one. Of course, there were many miniature versions too! 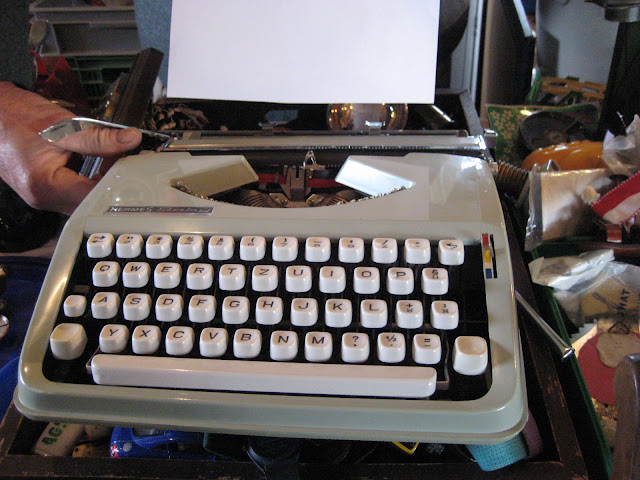 By a stroke of luck, I managed to recognize a familiar-looking case on a seller's table, hidden under a pile of stuff. Here, he is showing it to me. I feel bad about asking about it since I don't intend to buy (Hermes Baby fatigue has been mounting for a while now, as you can imagine), but the seller is very nice and doesn't seem to mind. 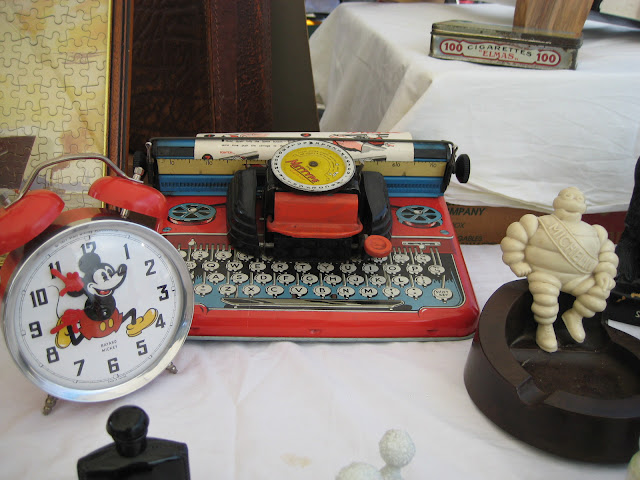 Does this count as a typewriter sighting? Do these toys even work? All questions I ask myself as I take a picture anyway, vowing not to return to this market with its hodge podge of model trains and cars, antique porcelain and glassware, and various kitsch objects - really, nothing I couldn't find in Geneva on a fine weekend. I try not to think too much about the train fare I spent to get to Aarberg. 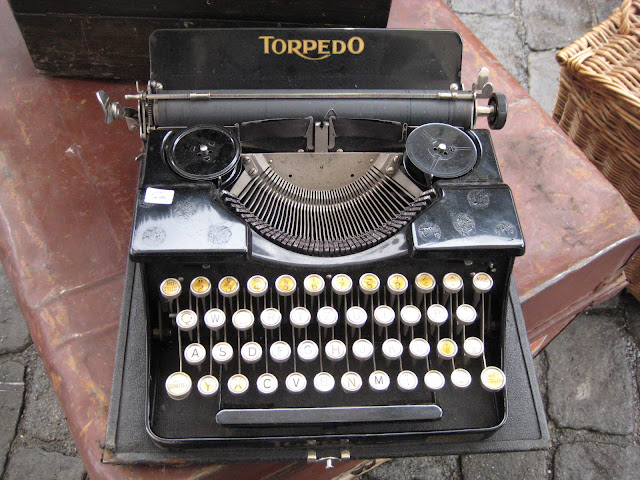 The last typewriter sighting of the day - and the best too, as it was neither a Hermes Baby nor a toy. I seriously debated getting this one, if only as a souvenir from Aarberg, but ultimately I decided against it as I am not such a fan of this boxy form factor (the early Royal portables sport a similar aesthetic, as I recall). 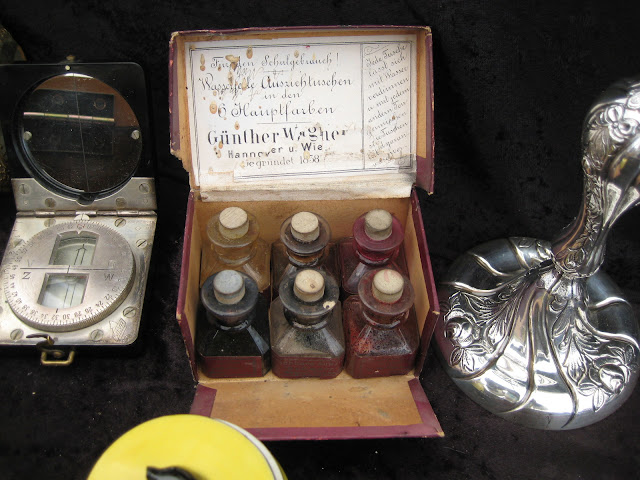 An interesting writing-related find: vintage bottles of Gunther Wagner writing ink (he is the fellow who later went on to purchase and build up Pelikan AG). Authentic? Who knows. 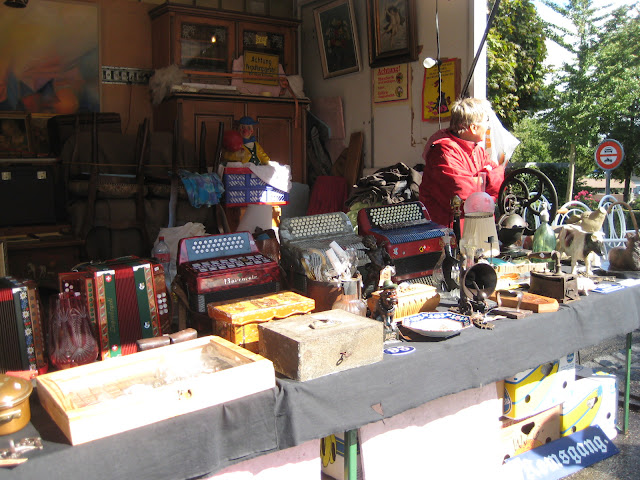 There were many more button accordions to be seen than typewriters! They do look sort of similar, one might say...

I was keen to visit Aarberg because I remember Herr Wepf mentioning that he had found many typewriters there, although perhaps I caught them on a bad day. I was so disappointed at the poor showing that I came back home and headed for our local flea market, where even though it was late in the day and everyone was closing up shop, I promptly found this: 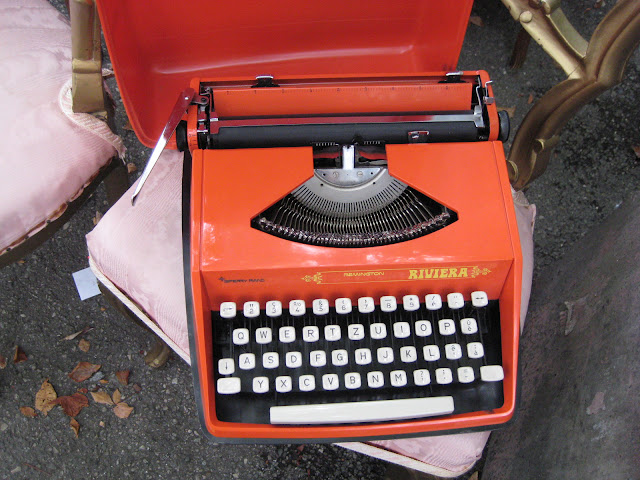 Score. Great price, too. I didn't pick it up though; these days I am being stingy about my limited space. While the festive color and non-Hermes-Baby-ness both appealed to me, I couldn't see myself getting very excited about this plastic, carriage-shifted, late model Remington with a half-broken latch. So I left it behind. It was only a single sighting, but it served to remind me that if I just want to take a couple of pictures of typers in the wild, I don't have to go quite as far as Aarberg*!

*A two-hour journey; not unacceptable, but not very close either.
Posted by Adwoa at 10:33 PM
Labels: Eye Candy