A Highly Unusual Keyboard (and Other Scary Tales)

Oh, alright. There aren't really any tales of horror, but it seemed apt to threaten some on Halloween. There is, however, a rather unusual keyboard on a Princess typewriter that I came across over the weekend (and if it appears that I do little lately but hunt here and there for typewriters in the wild... mea culpa). I occasionally do other things too, but unless you would be interested in a lengthy discussion on how to make your own soymilk, there's no point in going into that here. (Now that's a scary tale...). But, I digress. The unusual keyboard in question: 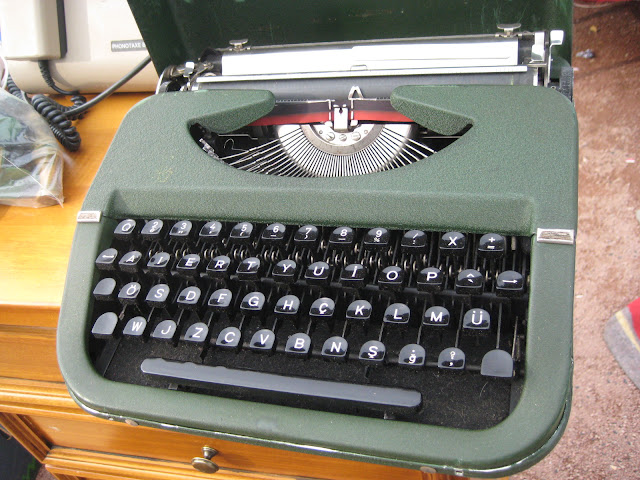 What we have here is an AIERTY keyboard. The letters Q and X are on the number row, and there is a umlaut U, all adding to the mystery of the thing. This must have been branded Princess at some point (as opposed to Maritsa), because you can just barely make out the outline of the golden crown logo. I think this might have been a Czech or Polish keyboard, but I'm basing that solely on the fact that WJZCV (bottom row) might appear in a lot of words/ names in those countries. I can't find any trace of an AIERTY keyboard in Beeching or on Google - perhaps one of my readers has some idea? 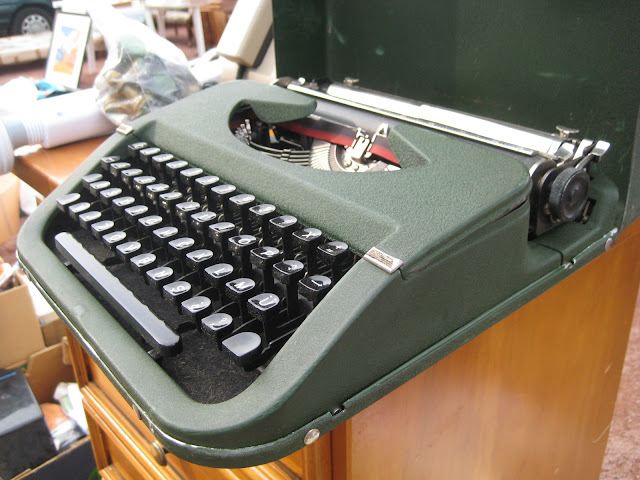 This was a handsome little machine; all metal including the top cover. I believe it's the Princess 100. I liked the color too and rushed to get a closer look when I first spotted it (I thought it might even be an Antares Parva). It would have been tempting if not for the odd keyboard. 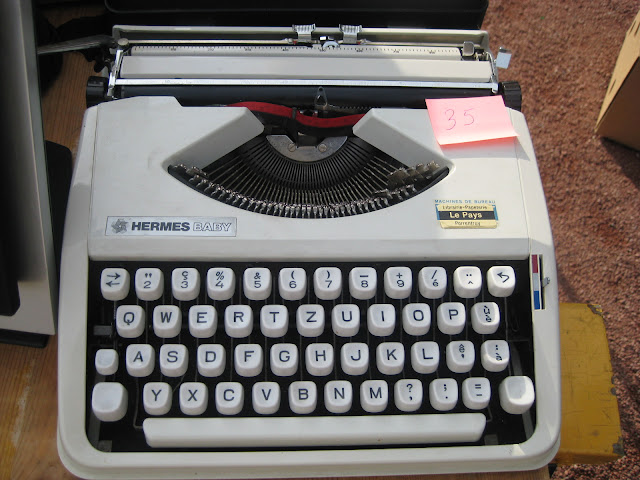 A brief rundown of the other Saturday sightings: this white plastic '70s Hermes Baby with techno pica typeface; 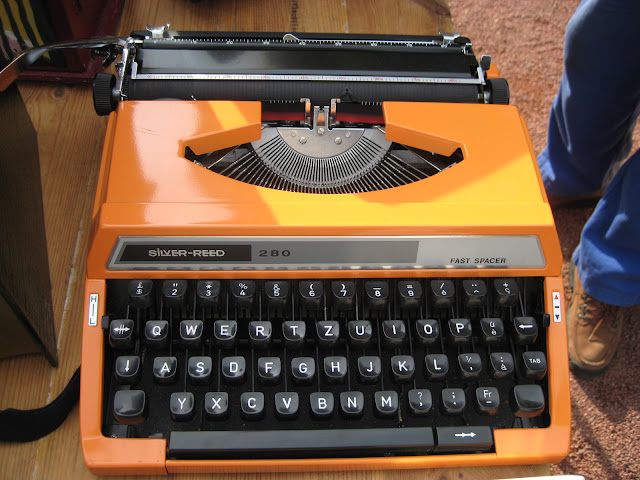 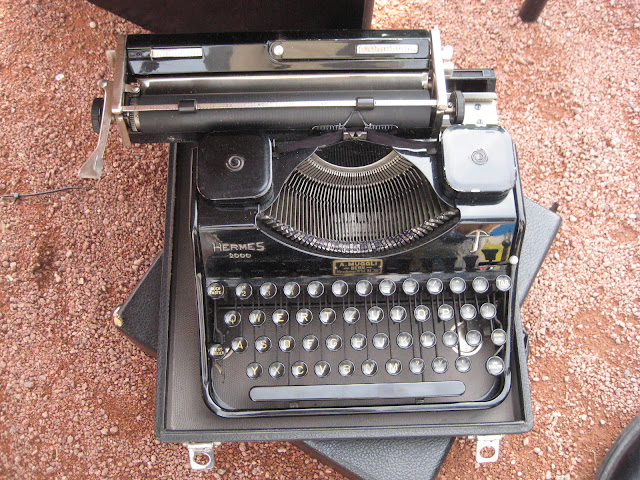 A shiny black Hermes 2000, that another passerby seemed rather interested in; 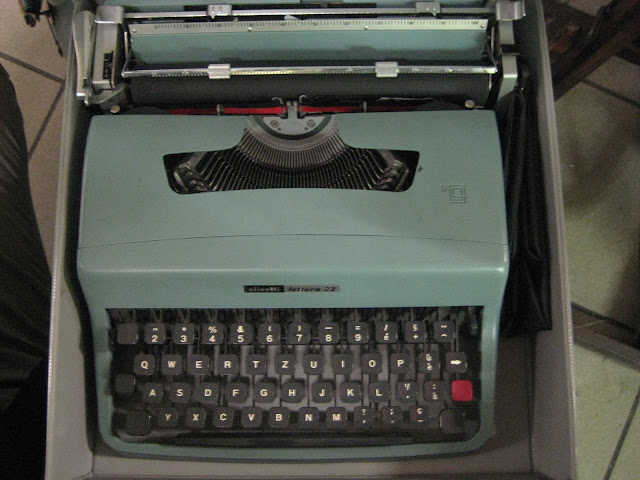 A Lettera 32 at the thrift store; (I should also add that I have officially been recognized by at least one of the staff at this store - as we were examining this Lettera he came over and asked, "What? The other one's broken already?" Apparently he remembered that we had already purchased a typewriter from him - more than one, in fact - and was wondering if we were destroying them at a steady pace. I didn't really want to get into the whole collecting bit... I don't know if not being anonymous is a good thing. Sigh.) 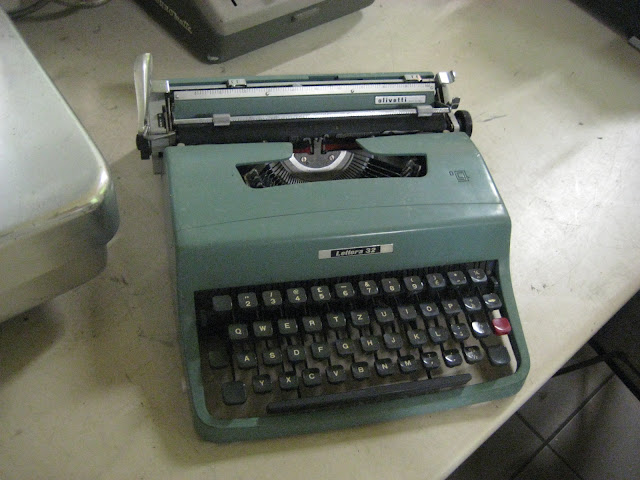 Yet another Lettera 32 at the same thrift store, mere inches away. Identical down to the keyboard layout and elite typeface, only this one didn't have a case. 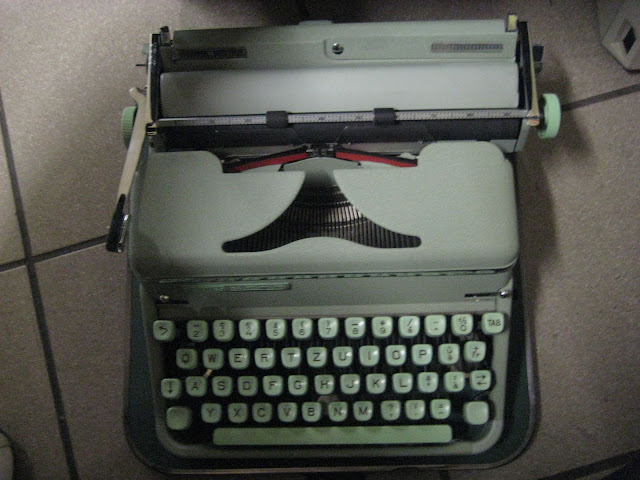 Hermes 2000 in just about pristine condition - you should have seen the case on this thing; it still had the original Hermes tags dangling from it. 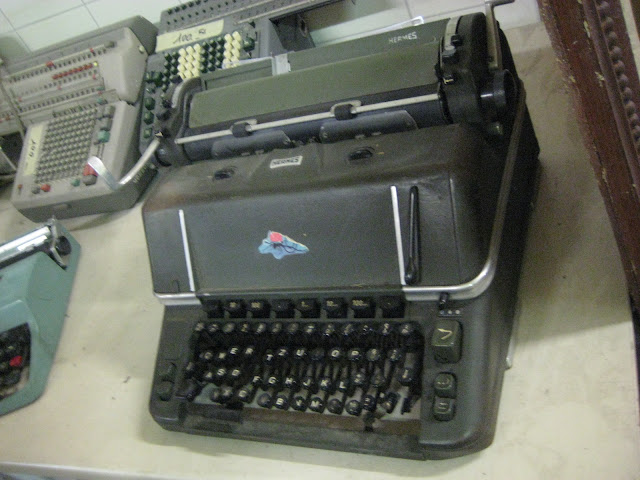 Hermes Ambassador in a bit of a sorry state; 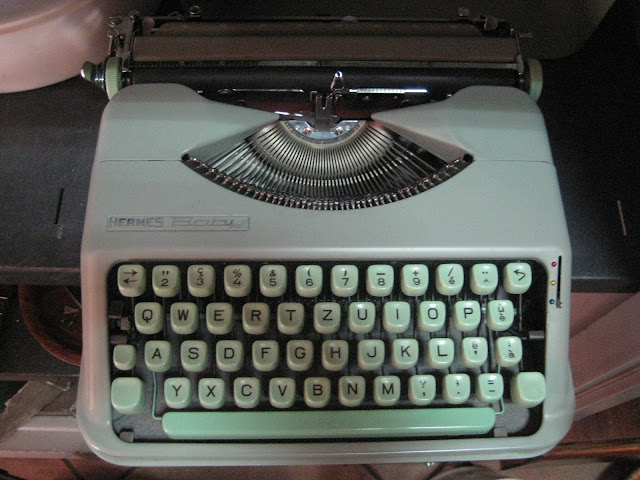 Hermes Baby in fantastic condition that came home with us - it was too beautifully-kept to leave behind!

Oh, and another that we did bring back from the market, and that I will write more about later, but I wanted to show a picture in situ: 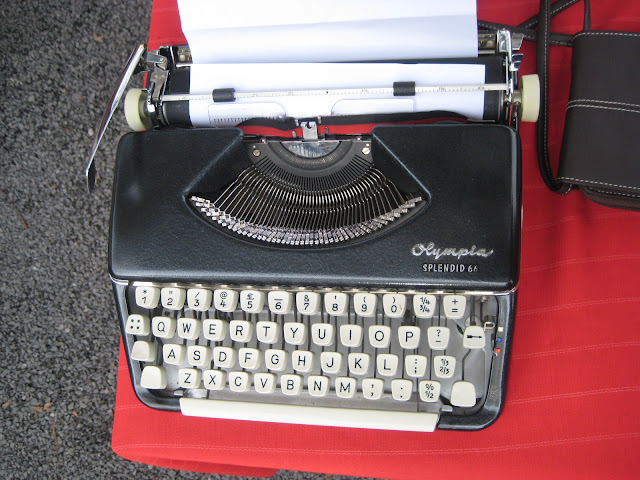 Not often that you find a qwerty keyboard around here, I can tell you that! So, it looks like I have been more than compensated for last week's minor disappointments... nothing but good typewriter karma this time around :-)
Posted by Adwoa at 10:48 PM
Labels: Eye Candy