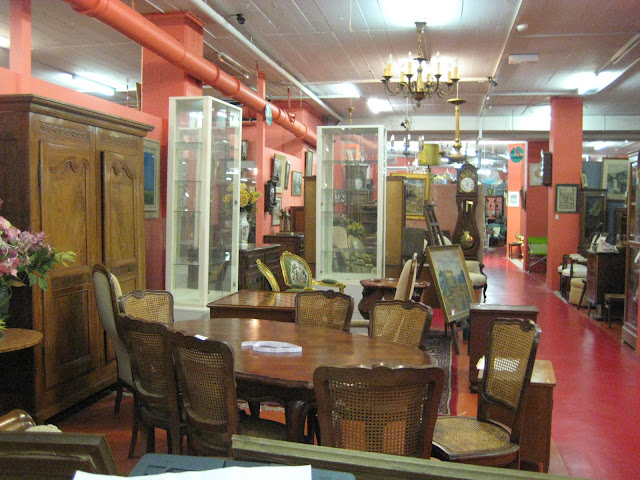 I have been out and about, as usual, even exploring some new venues to see what - if any - typewriter discoveries could be made. The showroom above - 2,000 square meters of furniture and antiques - was recommended to me by a work acquaintance, and it is in a part of the city I don't often visit, so I made the trip last Saturday. 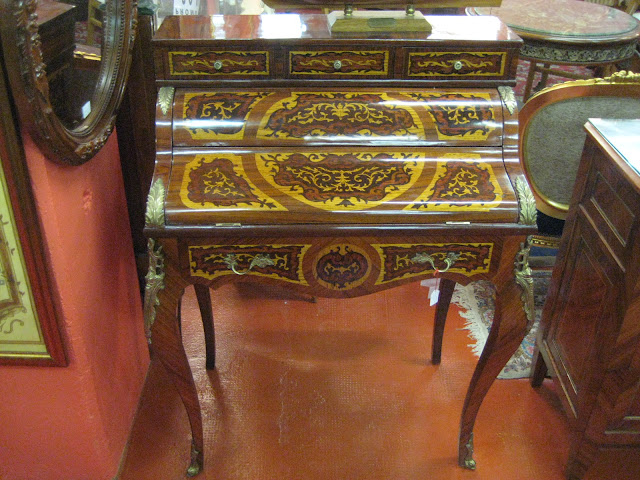 As I expected, they had lots of beautiful furniture and quirky antique objects, all with "Geneva" prices - i.e. not even close to affordable. I would not return, but it was good to see it at least once to know what they had on offer. My theory with these shops - those with lots of display room - is that they are in no hurry to sell anything, hence the elevated prices. Your average flea market seller, who has to physically haul everything from one location to the other, is more willing to entertain offers. 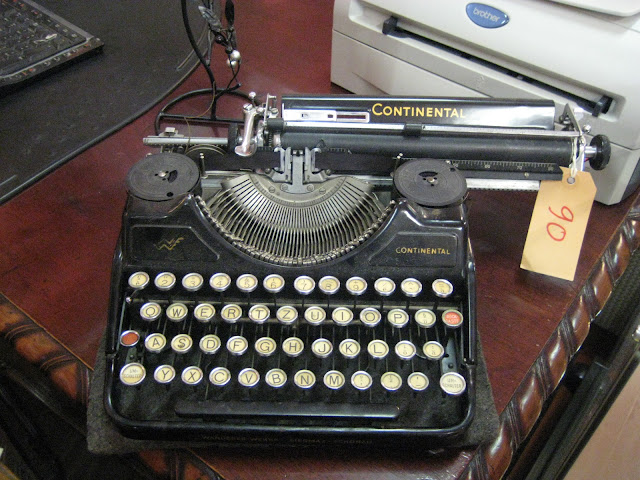 There was one typewriter to be found in the jumble - just one. This Continental, with the carriage drawband gaily hanging out of the rails like a thread of spaghetti... yes, they were asking CHF 90. Nice try. 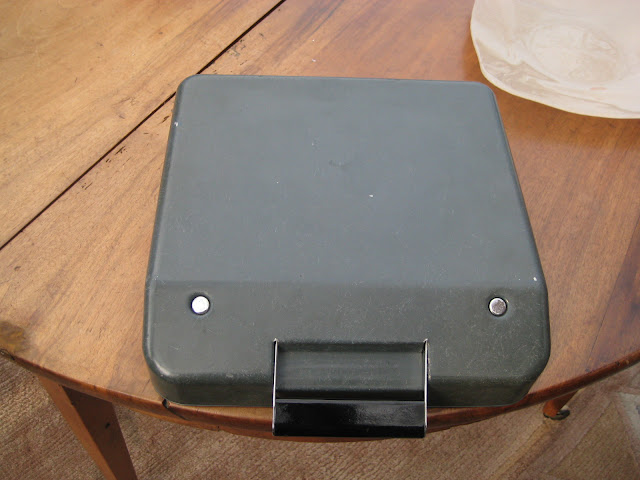 With that disappointing excursion behind us, we made our way to the usual flea market, and after walking around for only a few minutes, we found this sitting on one of the tables of an antique furniture dealer. I see this fellow every week, and he usually has the same desks and secretaries (overpriced) on offer every time. This seemed to be a rare offering. 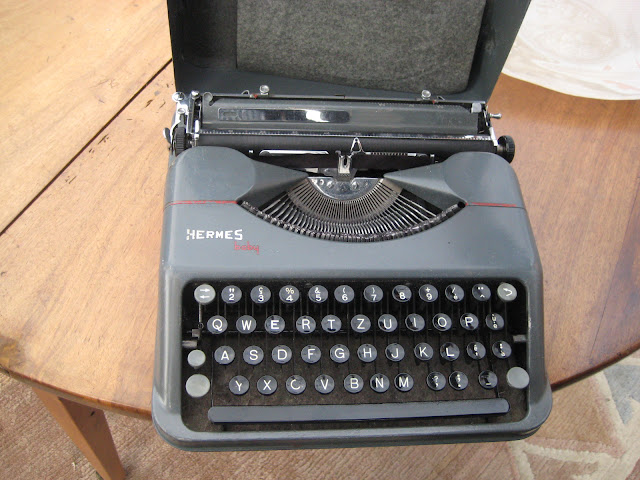 He noticed us looking at it and said, "I would usually sell this for 80 francs, but I'd like to make you a special offer - only 50 francs." I suppressed a smile. "Is it too much?", he asked. I shrugged. Maybe someone would buy it for that much, but I doubted it. It wouldn't be me, that I knew. The best part was when he said, "It's worth far more, these are so rare!" Ah, the eternal rhetorical question: what is my typewriter worth? Slippery slope, this one. I moved on. 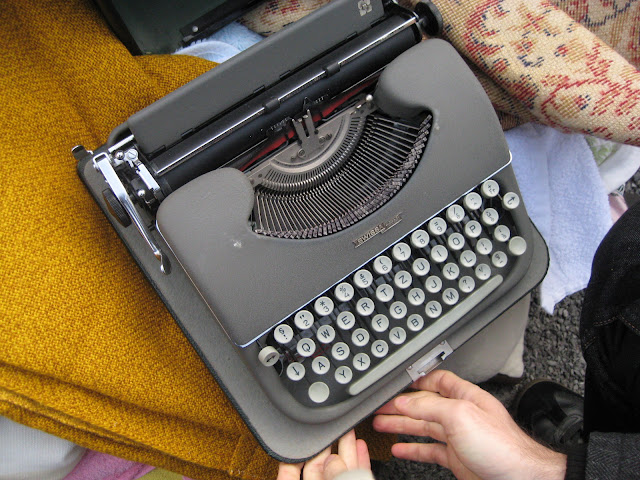 Not far off was the Remington Portable #1 for which I had been quoted CHF 150. Of course, no one was buying that either. I was a bit surprised to see the CHF 10 Swissa still on offer, and I asked J to look whether he could unlock the carriage, as I had not been able to do it the last time. He tried valiantly, but without success. It's a puzzle - a seemingly spotless typewriter, that refuses to type. Sad. 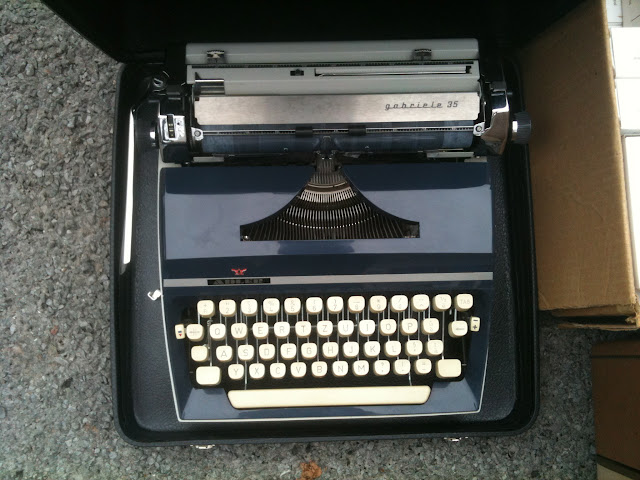 A navy-blue Adler Gabriele 35 - I know many J2s and J5s can be found with this color in the U.S., but this was my first time seeing it. Rather dapper, and it looks less plasticky than the all-ivory version. 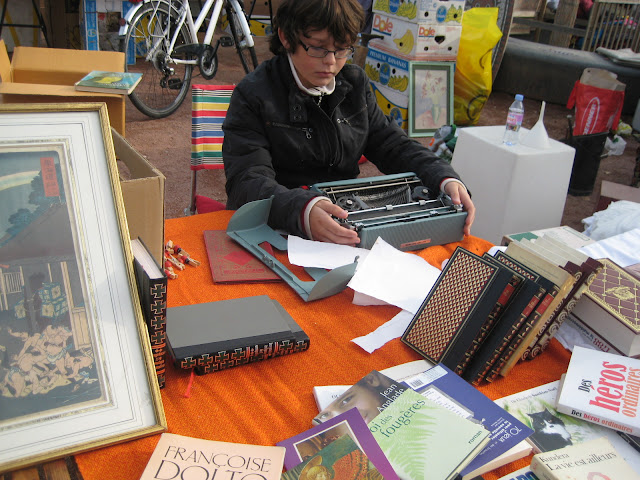 The funny thing is that I noticed an Olivetti case under this seller's table and was wondering how I would get him to show me the typewriter it contained... when J pointed out the eager young lad clacking away on the Lettera 32's keys, surrounded by torn sheets of paper. What a heartwarming sight! 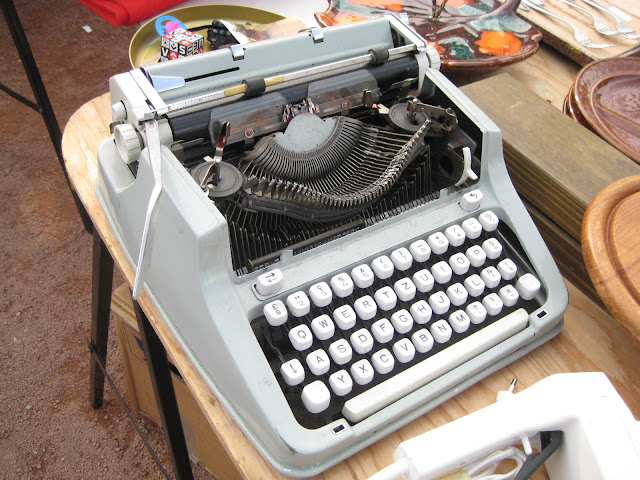 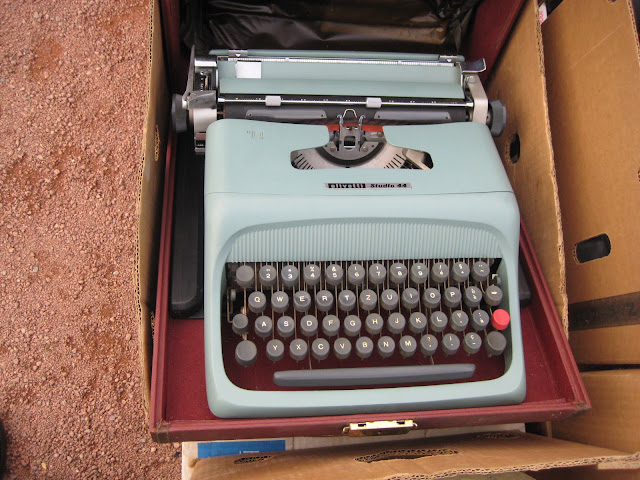 An elite-type Olivetti Studio 44, very nice condition. How come all the script ones in the U.S. never show up here? I'm not complaining, otherwise I'd be far too tempted! 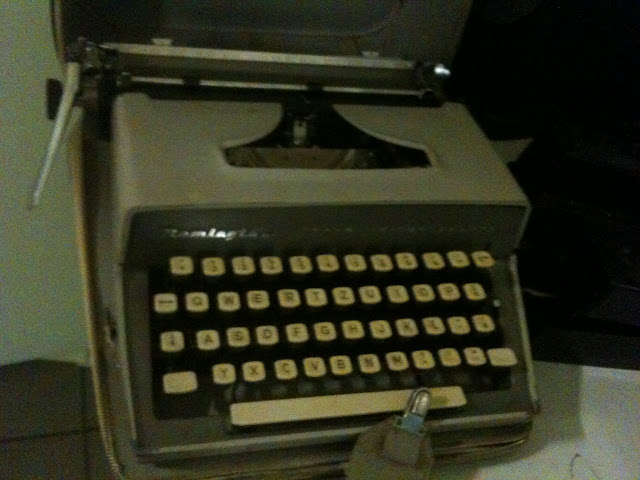 Terrible picture, but for the sake of documentation - this Remington Quiet Riter (or Travel Riter?) popped up at a local thrift store. 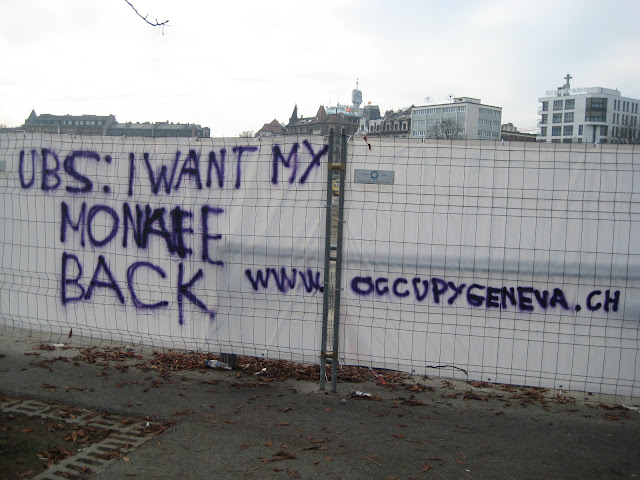 A fitting end to a cold, gray Saturday morning - it appears someone wants their monkee back from UBS? Perhaps the local Occupiers take a break on the weekends - I've yet to see actual people behind the various signs/ graffiti. I would have been curious to hear more about the monkees... pity.
Posted by Adwoa at 7:55 AM
Labels: Eye Candy