The Greatest Day in Geneva Typewriter Hunting History, Ever. 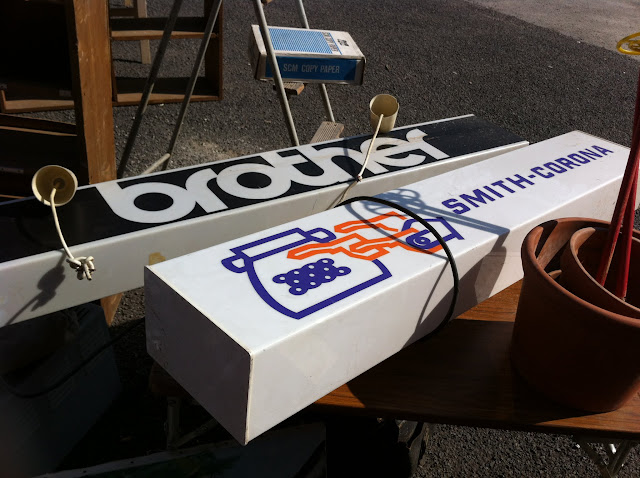 I had the kind of day today that every collector surely dreams about - and it has left me on a high after a rather dull week. In fact, I had been worried about my typewriter-finding mojo lately; I found myself antsy for something thrilling to come my way, and as fate would have it, today was my lucky day. Nothing earth-shattering, nothing ultra-rare, but a big enough deal that I think March 10, 2012, will go down in my typewriter-collecting history as A Very Special Day. 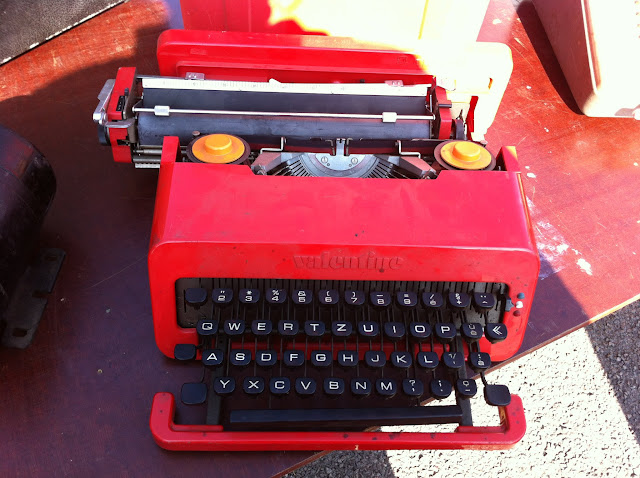 Let's start from the beginning, in which J and I set off on our usual Saturday flea market saunter. Halfway around the market, I am sure it will be another day to write off like last week was: there was the usual Mignon (I believe it's been more than a year since we first photographed it), then the predictable Hermes parade, this time a Hermes 2000 and a Hermes Media 3. But I'll save those pictures for another round-up, because when we rounded a corner of the market, J spotted a Valentine on a table in the distance, and we were instantly plunged into typewriter paradise! 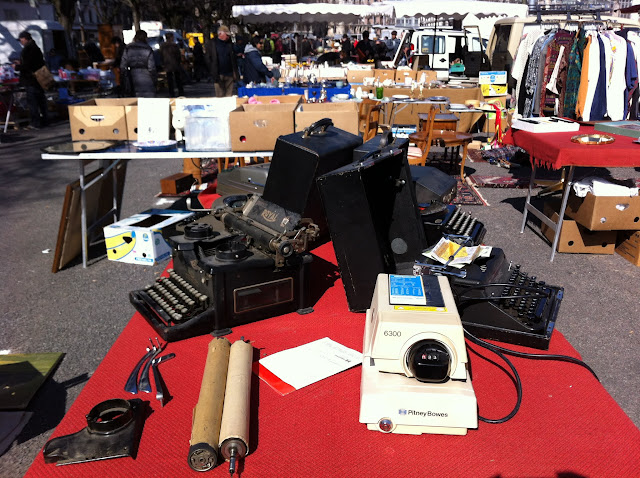 As we moved closer and I counted the number of typewriters set up on the seller's tables, my heart raced - there seemed to be so many, I didn't know where to look! When all was said and done, though, there were seven typewriters - a reasonable number, but definitely the most I have spotted from one seller in one day, plus four empty typewriter cases, and three or four mechanical calculators. 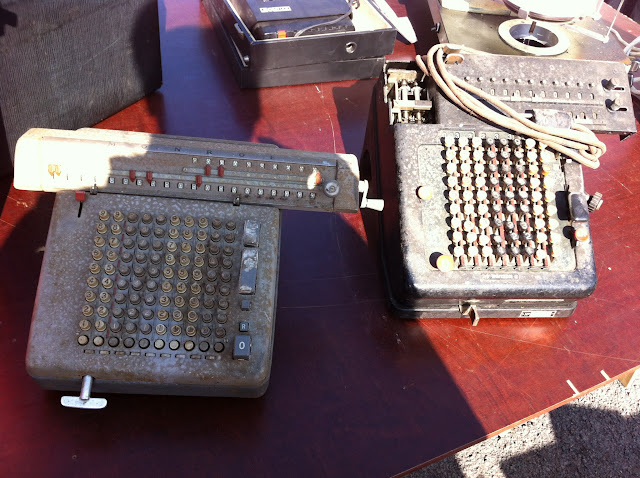 What was even more impressive, though, was the variety and sheer quantity of typewriter-related materials: boxes and boxes of spare parts - segments, type slugs, type bars, platens, platen knobs, carriage return levers... everything you could think of, and I didn't even dig all that thoroughly (trust me, I wanted to spend all day with those boxes!). Then there was a good bit of literature, and some tools - it soon became apparent that we had stumbled upon the remnants of a typewriter dealer's store. First, the typewriters: 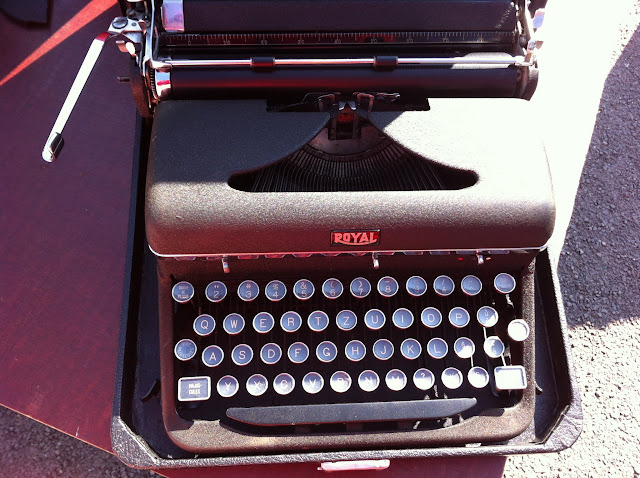 This '40s Royal portable was the first one I photographed - clean, beautiful, and tempting, but a bit larger than the portable typewriters I usually favor and the black crinkle paint didn't do much to draw me in. My favorite part is the contrast of the square shift keys with the remaining round keys. 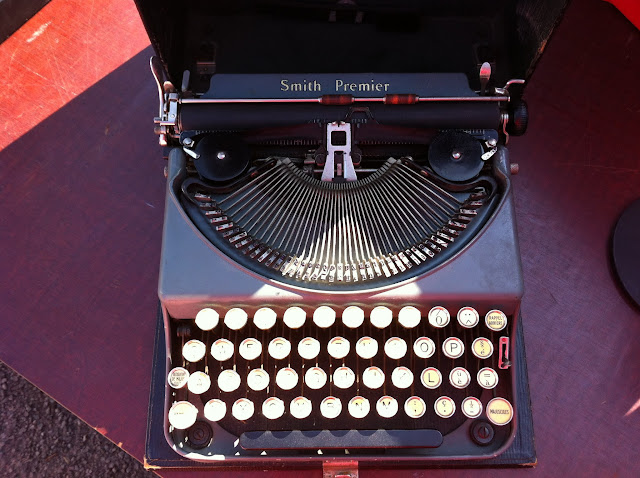 Smith Premier in an unusual grey color (it is a re-branded Remington Portable No. 2). I have been looking for one of these for a while - the No. 2, that is - so as soon as I saw this one I decided it would be coming home with me. This made me especially happy I didn't pick up that Remington Portable No. 3 a few weeks ago! Glad I trusted my instincts on that one. 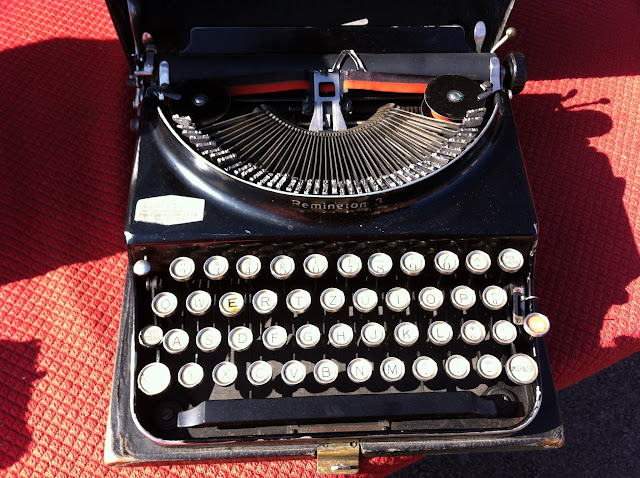 Speaking of No. 3s, the seller had one too! So this makes the second Remington Portable 3 spotted at the same market in less than a month... I'm just beginning to appreciate the popularity of Remington typewriters (well-deserved, I might add). I didn't spend as much time as I would have liked exploring each individual machine, but this one looked well-preserved too and I'm sure it worked fine. 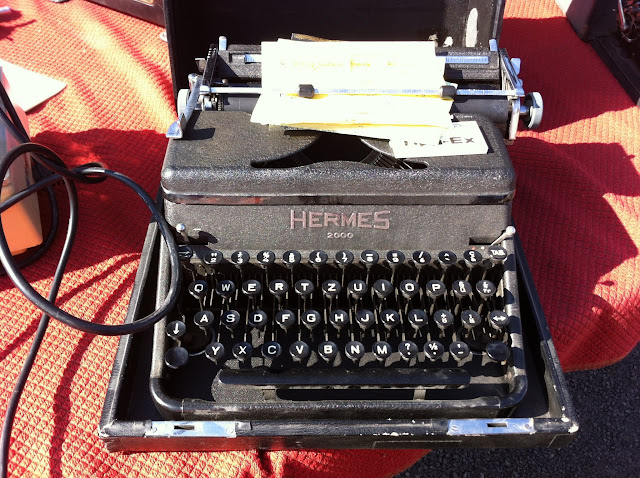 Despite the unusual name badge (instead of the painted decal these often come with), this Hermes 2000 was the least interesting of the lot - to me, at least. I forgot to take down the serial number for Georg, and I'm sure he will stop by and ask me about it in three... two... one.... 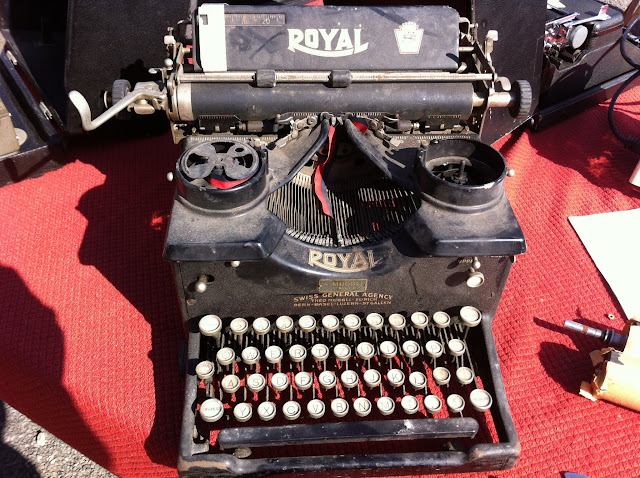 A fine Royal No. 10 rounded out the selection. The Olivetti Valentine has already been pictured, and the seventh typewriter was an AZERTY-keyboard Remington Noiseless 7 in grey crinkle paint that I only just realized I forgot to photograph. A curious passerby was testing out the keys, so I moved on to look at the other machines and then forgot about the Noiseless. Ah, well. 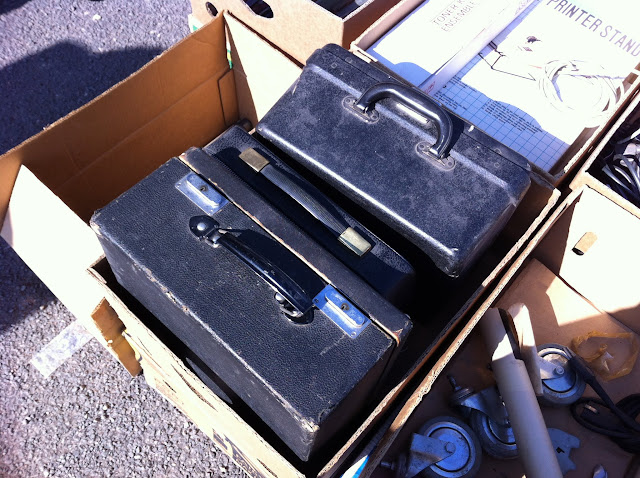 Empty typewriter cases - the first for a '40s Hermes 2000, most probably; the second for an Olympia Splendid; and the third for... an Underwood/ Royal portable (I think). 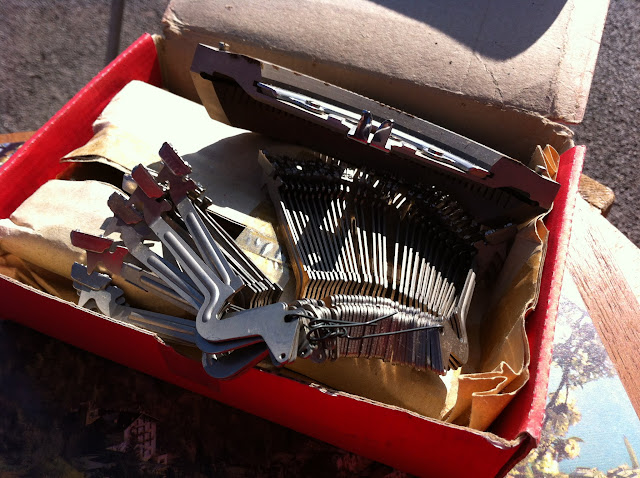 There were dozens of these red boxes that originally contained Hermes silk ribbons and were now filled with complete sets of type bars (the few I opened all seemed close to pica, but it would have taken hours to go through everything). An amazing embarrassment of riches - too many, really, for me to take advantage of. What would I do with all of these? I wished my fellow typospherians could have been there to take their pick! 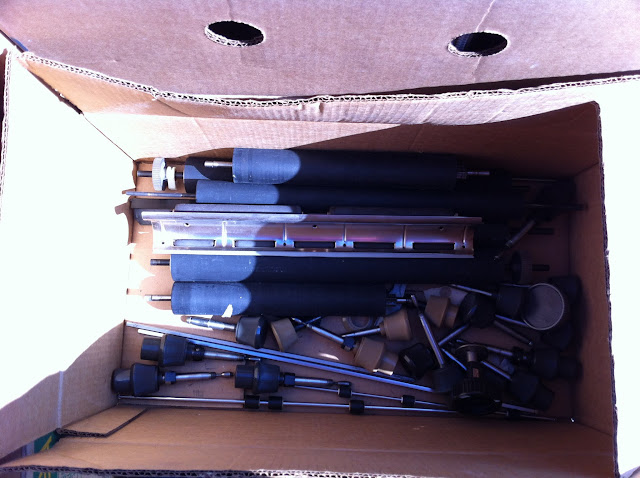 The one spare part I did keep an eye out for was Hermes platen knobs, but these - in a box with a bunch of platens/ carriage parts - are not for Hermes and I think whatever typewriter fits them is more likely to be a standard than a portable. 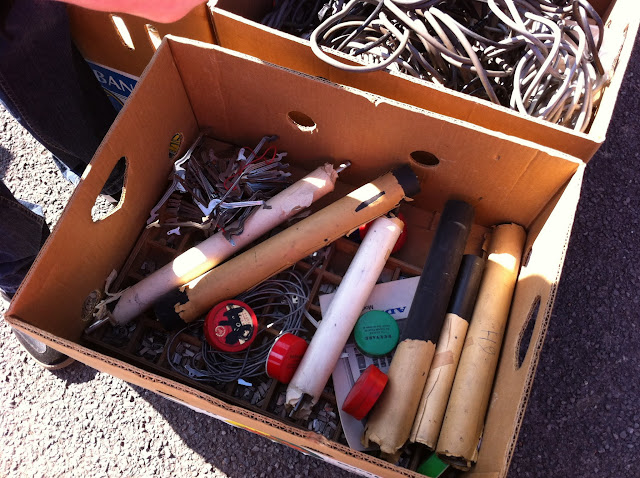 Another box of type bars, type slugs, and brand new (but rather large) platens. I didn't pick any of these up because I figured they would be as rock-hard (due to age) as any of the others I had, plus the chances they would fit anything would be pretty slim since I didn't have any measurements at hand. I was hoping the ribbon boxes contained actual ribbons, but they were all chock-full of spare type slugs. 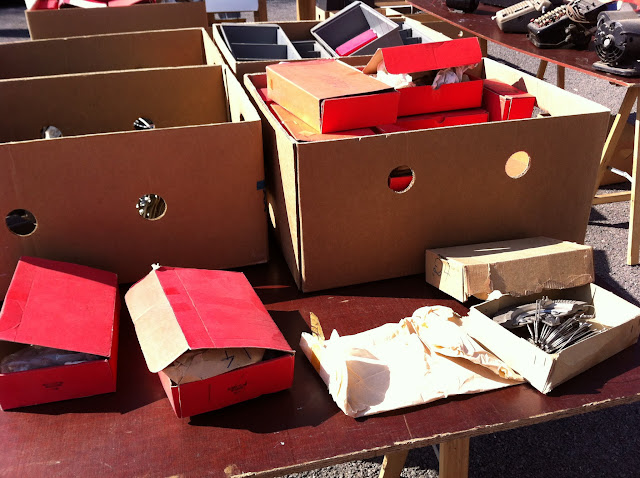 The seller was engaged in a lengthy telephone conversation while we explored his boxes, but once he was done, we approached him and he turned out to be very friendly. He told us these had all come from a typewriter repairman, now in his 90s, who had retired from the business 20 years ago and was now clearing out the rest of his store. We were both thrilled that there was a typewriter repairman in Geneva, even if he was retired, but the fellow assured us he was in no state to receive visitors, sadly. 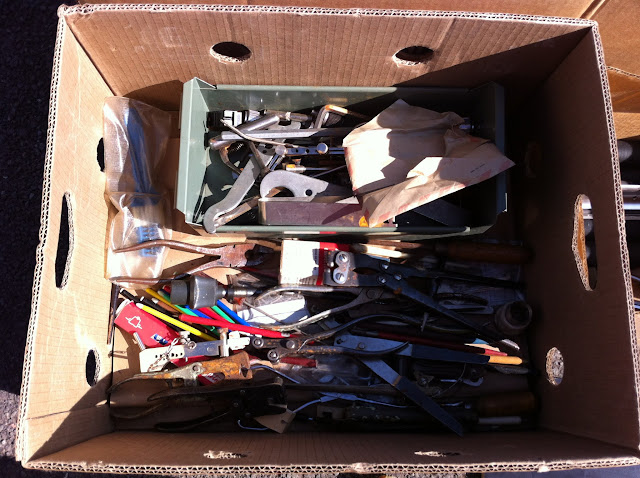 An assortment of tools that could come in handy if only I knew what to use them for!

So, to wrap it up: J was very intrigued by a bilingual French/German typewriter repair instruction manual, and I was fixated on the Smith Premier, so we bargained with the seller to get them both for CHF 50. A bit more than I wanted to spend on a typewriter, but I've been having a dry spell and feeling generous, plus I appreciated the seller's friendliness and I was thrilled to find myself surrounded with all this fantastic typewriter history. 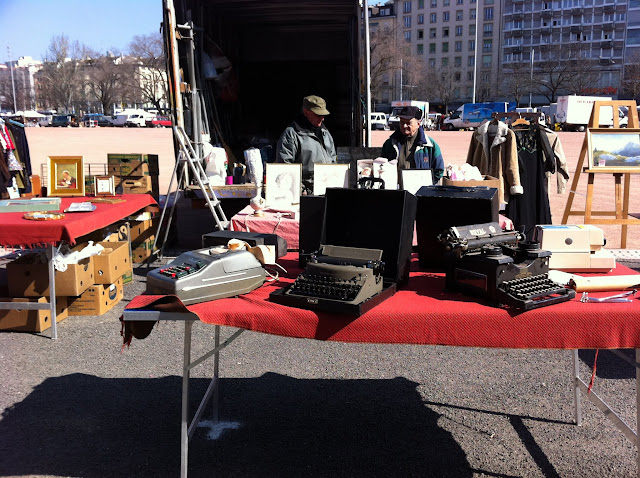 A final shot as we left his stand - in the foreground is the Remington Noiseless I neglected to get a solo shot of.

As the first sale of his day, the seller was pleased to spend time speaking with us - he also seemed impressed by our knowledge of - and passion for - typewriters. He offered us several more of his wares: in particular, he was very sure we would not regret taking home the gigantic Smith Corona sign! I assured him we wouldn't know what to do with it, or have anyplace to put it.

Then we moved on to the Valentine typewriter, which I looked at longingly while asking him whether he had noticed it was broken (the carriage drawband was long gone, a very significant problem). Still, the Valentine always makes sellers see dollar signs, so I didn't even want to imagine what he would ask for it. Besides, we already had one, this one would be a pain to fix, and we weren't really interested. Nevertheless, I couldn't help gazing longingly at this red icon, never before sighted in a flea market, intact with ribbon covers, manual, and original brush.

"You know," the seller suddenly spoke up, "I'm sure this is a rare typewriter and it can fetch some money. But I don't know enough to fix it, and perhaps you could? Even if it turns out to be seriously damaged, you could still keep it as a decorative object. And if you fixed it, you could sell it and make a nice profit! Actually, someone offered me thirty francs for it this morning and I refused. But you... you can have it for ten."

CHF 10?! J and I looked at each other - we didn't need to think about this long. We would have purchased the ribbon covers alone for that price (ours is missing one). So, we handed him the cash and rushed home, each with a typewriter in hand, barely believing our luck. At home with the haul: 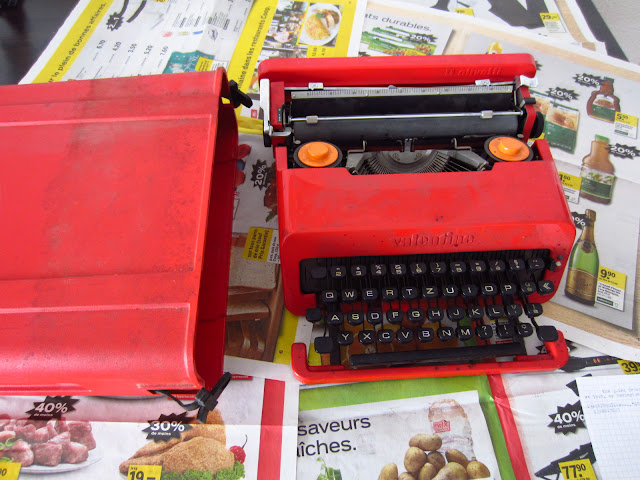 Olivetti Valentine S - for $10, you wouldn't turn it down either! Has some work to be done before it types again, but we are looking forward to giving it our best shot. Fortunately, we have a working one to use as a reference. This Valentine is in surprisingly good cosmetic condition, considering - yes, there is a lot of grime that will need to be cleaned off, but it seems to be all surface dirt and the type slugs are spotless. Will keep you all posted on the progress, of course. 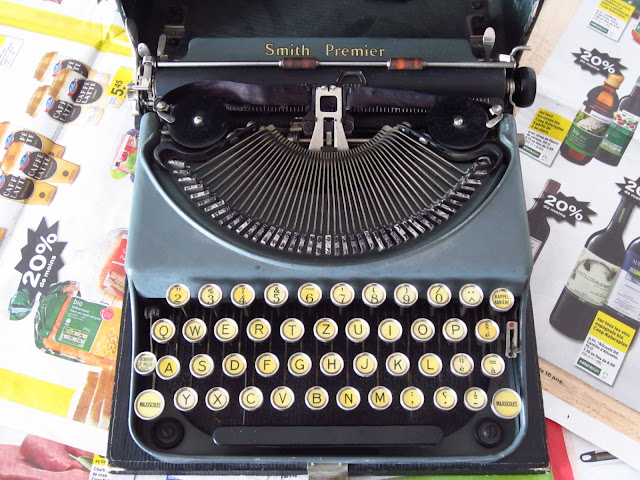 A better look at the Smith Premier's unusual color scheme. I am so excited about this little beauty, you have no idea!!! It popped up at just the right time - after I admired Ton's Remington Portable No. 2, lusted after Robert's "Crocodile Dundee" Smith Premier Portable, and wondered aloud about this strikingly-hued Remington Portable No. 1 on eBay. This seems like the perfect amalgamation of all of those. 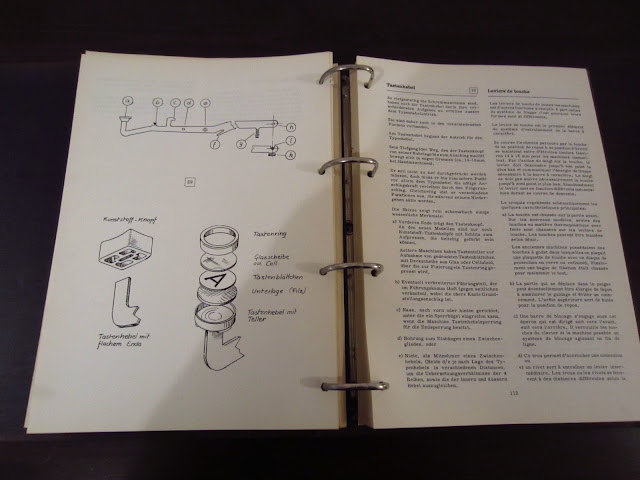 I'm planning to scan and PDF as much of this textbook as I can and share it via ScribD or Google Docs, but till then, here are a couple of previews. It was published circa 1942, and a good half of it is devoted to discussions of various metals and their properties! Not scanning that half, that is for sure :) 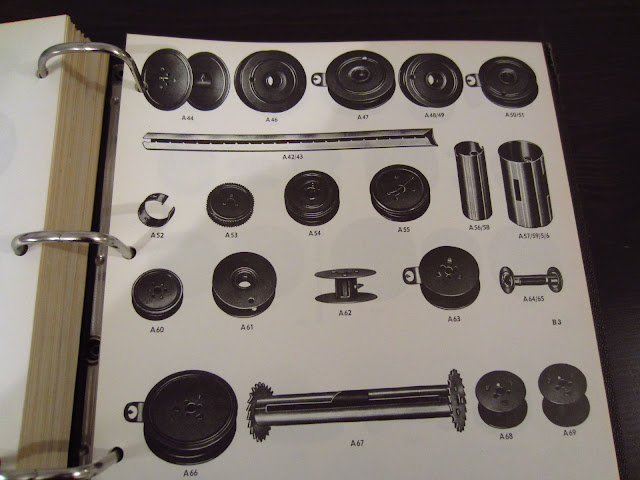 The typewriter section contains much intriguing information, including the most thorough pictorial guide to typewriter ribbon spools of all shapes and sizes that I have ever seen.

Once I had come home and unburdened myself, it was all I could do to restrain myself from turning right back around and returning to the treasure trove! But I thought I had better take some time to soak it all in, share the story with you, and then nose around the next time I am in the market to see if there is anything left we could look through. Even if he does manage to off-load everything else, I'm confident we made judicious choices and won't regret anything we left behind.