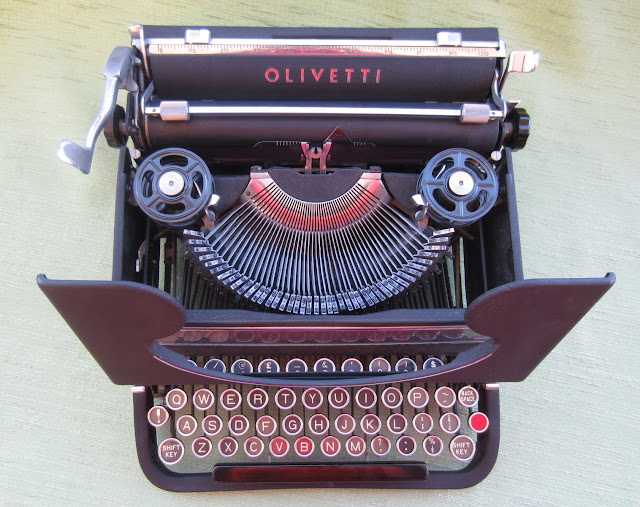 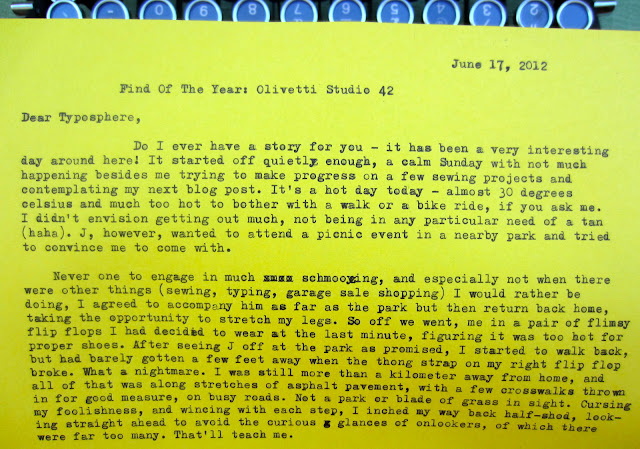 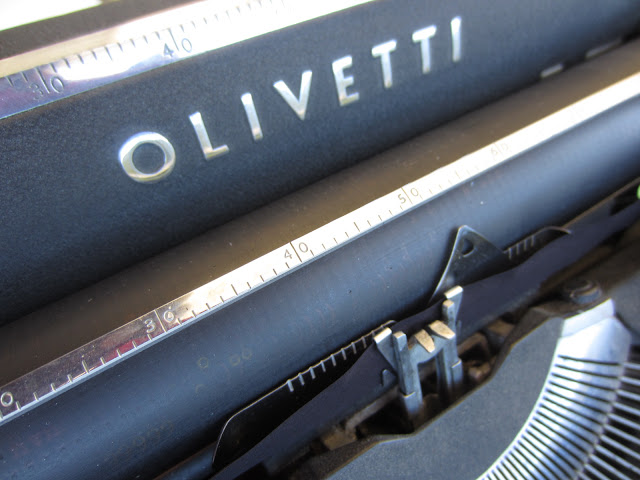 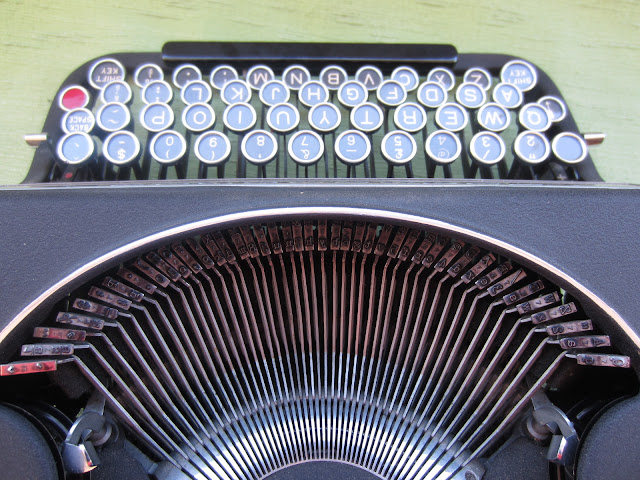 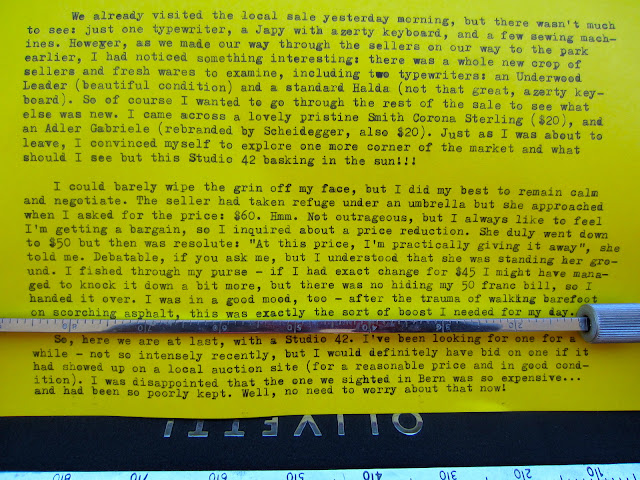 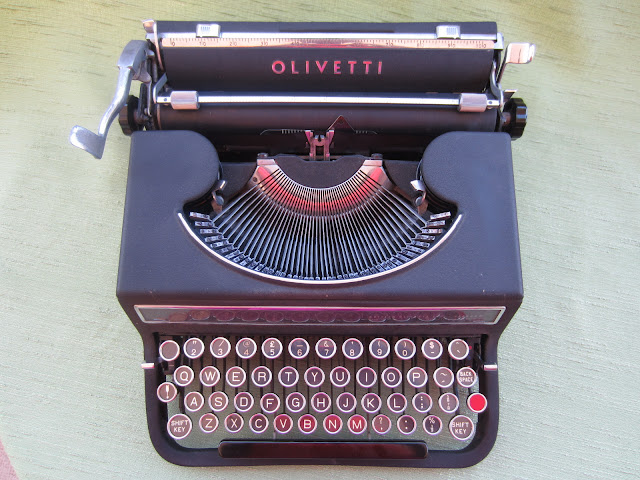 While I am - of course - thrilled to have found this beauty (even more so because of its QWERTY keyboard, as this is a British Olivetti from Glasgow, "Made in Italy and Assembled in Great Britain"), there are a few shortcomings I discovered once I had brought it home and the flush of excitement had worn off. The most serious is that this has suffered a considerable impact at some point in its lifetime: from this angle it may look ok, but see this: 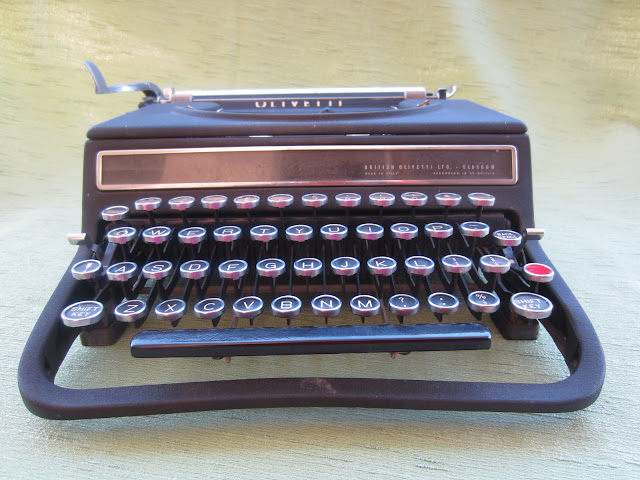 Whoa. The funny thing is that this does not affect the typing action in any way, except for an annoying click when the space bar hits the frame as you type. If you can ignore that - which I will learn to, I guess - this typewriter is perfectly functional for producing a page or two of text. 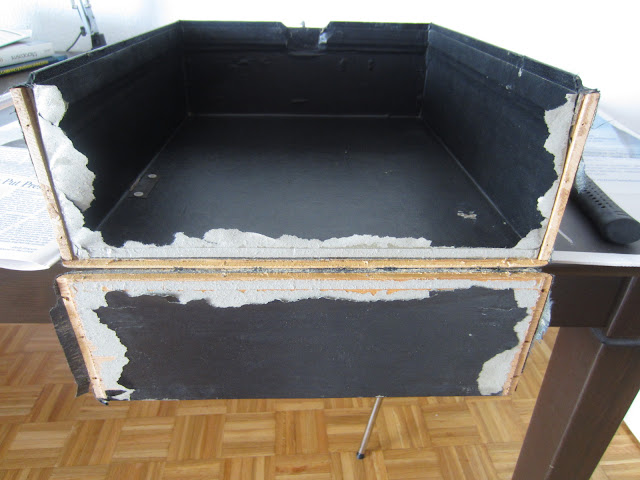 When I found it, it was propped up in such a way as to mask the damaged case, shown above. Fortunately, some glue and a couple of screws have made it whole again, although I would not trust it to fully support the weight of the typewriter. I'm surprised how flimsy it feels, though. 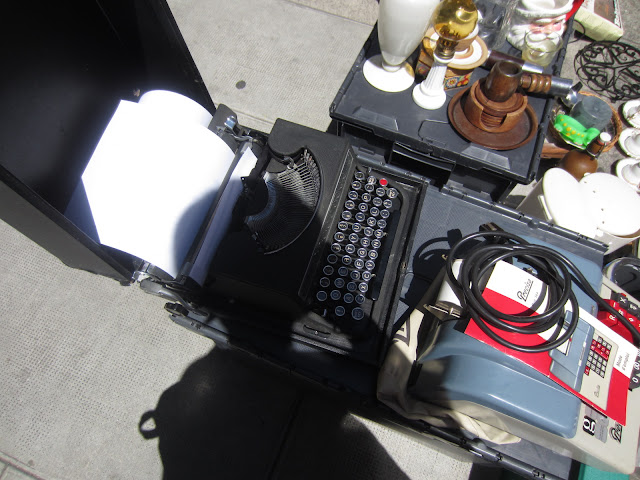 Here it is, as found - just ignore my giant shadow. Not easy to detect the broken case, as you can see, and I was more concerned with making sure it typed properly than checking for a bent frame. Quite impressive that despite the damage sustained, it still works so well. 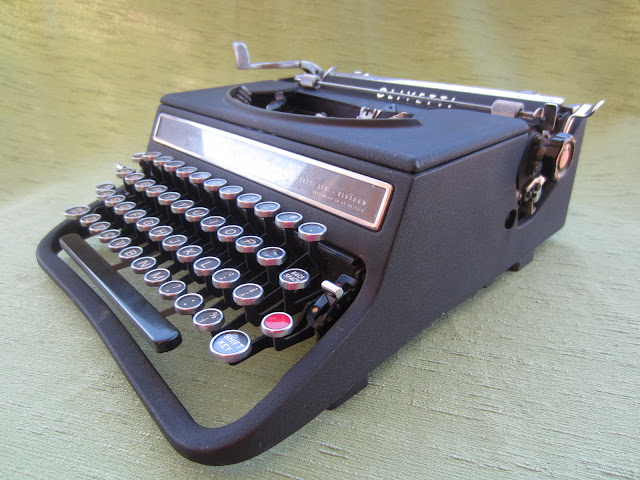 I haven't cleaned it properly yet - still a bit of dust and eraser shavings to get rid of - but it was in a decent enough state to be photographed. 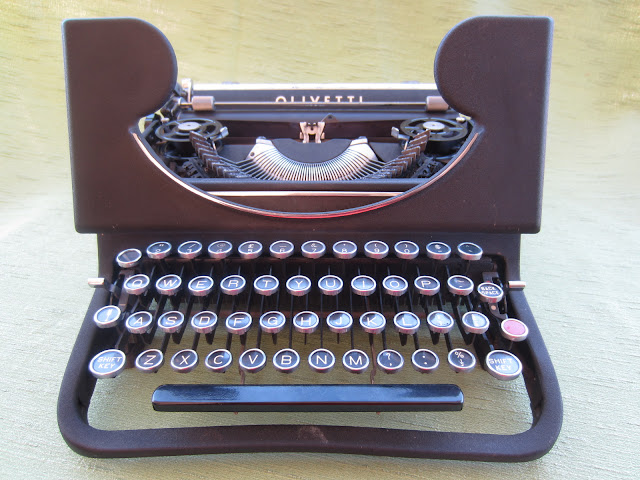 I think my favorite part is how the typebar cover swings out on a hinge. Beautifully designed. 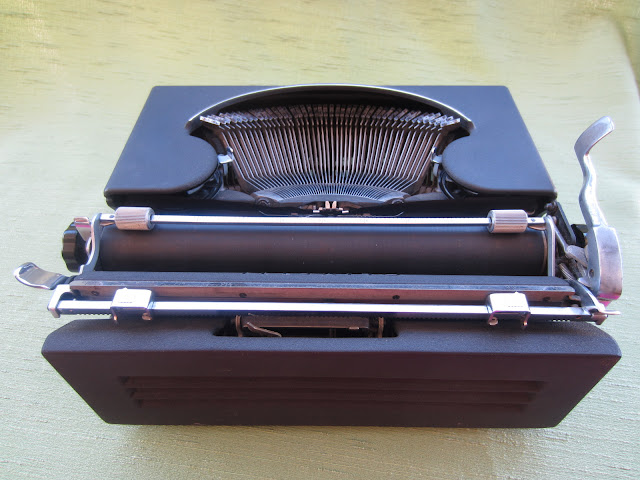 It's not often that I just happen to stumble across a typewriter I have been coveting, which is why I'm naming this my find of the year (at least so far). I suppose last year's equivalent would be my script Hermes Baby, as script typewriters are notoriously difficult to find in the wild in Switzerland.

After discovering the bent frame, I thought seriously about whether I wanted to keep this or not, but I have decided that I will. It's taken me a couple of years since I first coveted one to come across this, and it has a desirable QWERTY keyboard and a crisp elite typeface (just need to clean the type slugs, though). So until I come across a better one, this will do nicely to fill up the Olivetti Studio gap in the collection (we parted with the 44, and I wouldn't want a 45 or 46). Besides, if I am bothered by how it looks in the front, I can just turn it around and admire it for a while - the back view is just about perfect :).
Posted by Adwoa at 6:50 PM
Labels: Collection, Olivetti/ Underwood, Typecasting