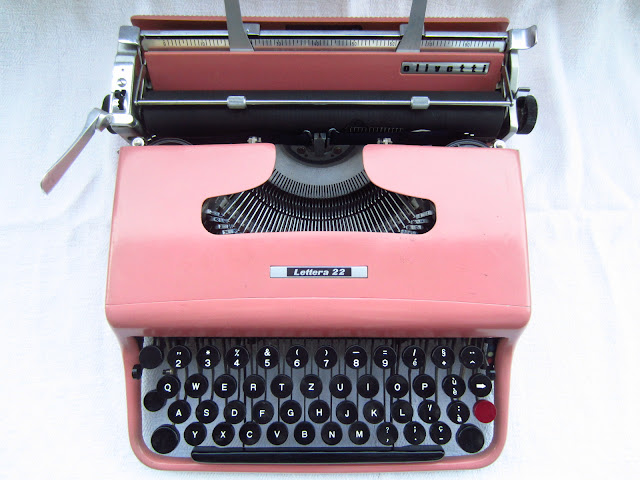 Yikes, *celebrate* is what I meant to type. 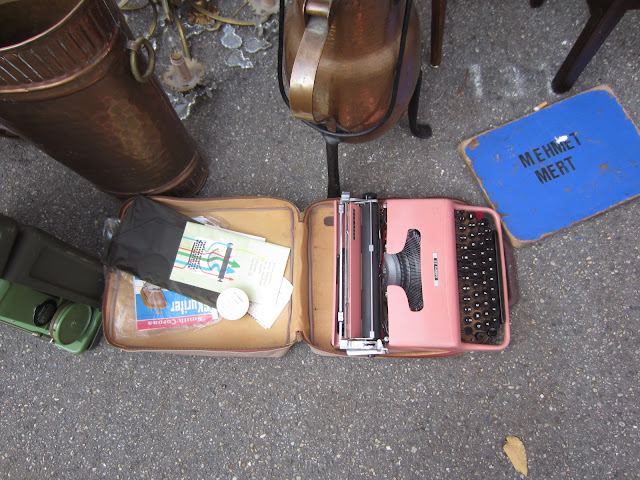 Here is the Lettera 22 as spotted in the wild; the blue board bears the name of the flea market seller I purchased it from. (Behind it you can catch a little glimpse of an Elna Grasshopper I left behind; I have one already that I will show off soon.) 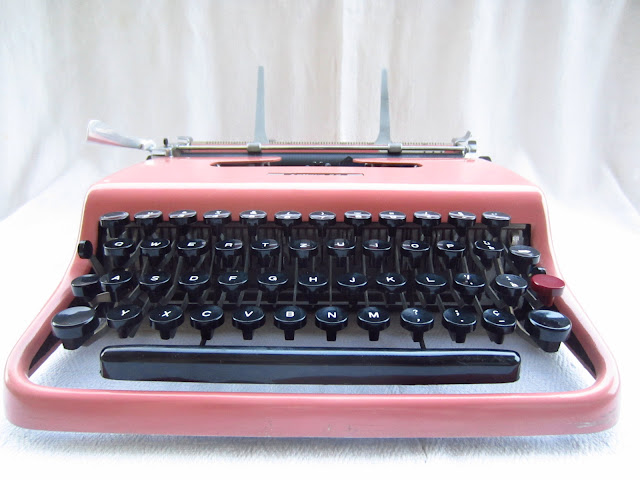 Thank you all for your guesses, by the way - some very interesting choices! I think an Olympia SF would have been more likely to find overall (since it's European-made and generally more common here). But a Royal QDL, as lovely as that may have been, would have been too large for me to carry home (while stopping to grocery shop on the way) - not that it would have stopped me from trying! 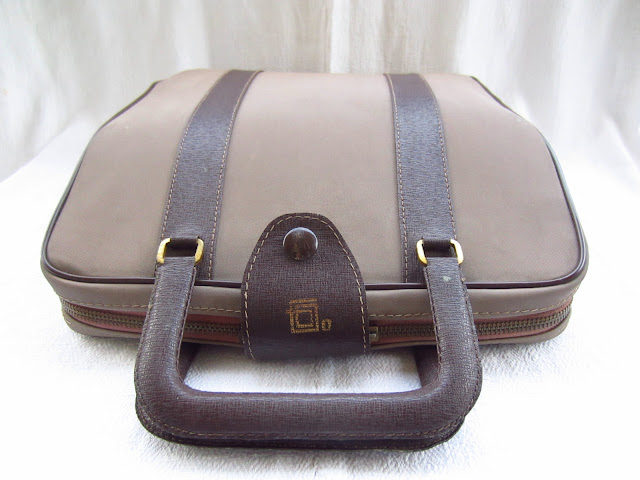 Here is the case, still very well preserved. Is it just me, or is the zipper pink as well? Talk about attention to detail! 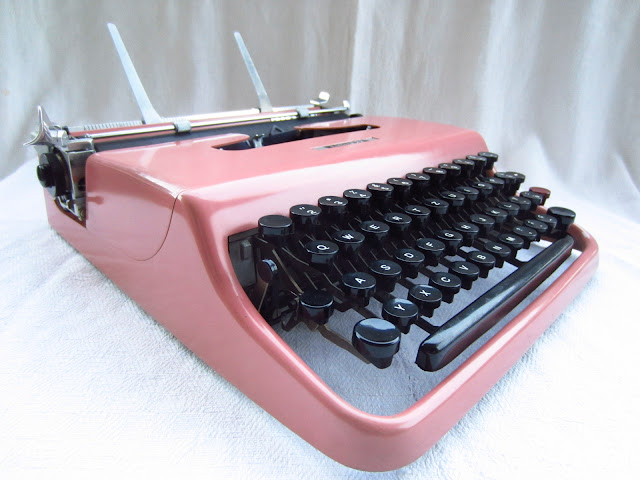 When I brought this home, I immediately looked up "pink Lettera 22" to see how many there were out there. Turns out: not very many, at least in this shade of pink. There have been a few sold on eBay UK in the past few years, and Robert Messenger also has one that he sold earlier this year. 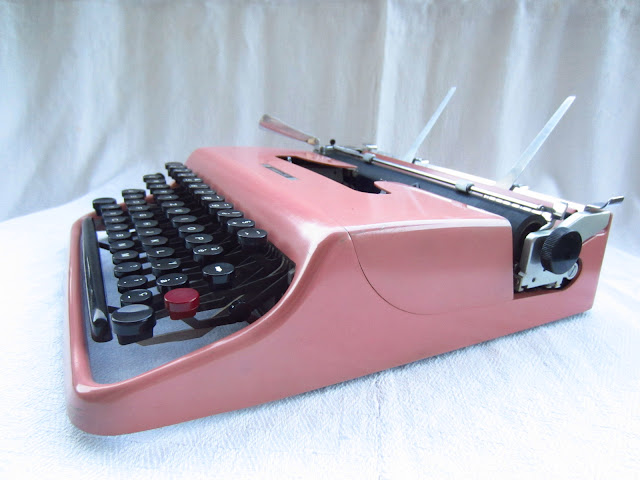 The thing about all those eBay UK and Robert's pink Letteras, is that they were made in the Glasgow factory (by British Olivetti). Now, it seems they had a vat of paint that was significantly darker than what their colleagues in Ivrea were using. As you can see, Robert's Lettera is a dark salmon pink, too different to be merely a change in lighting conditions. 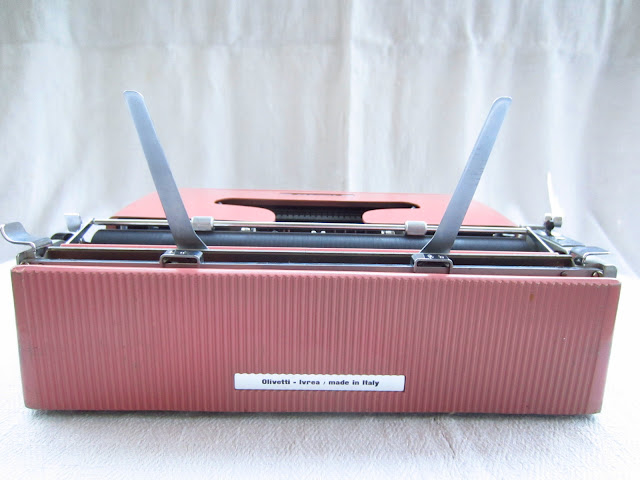 It's been a while since we found an Olivetti made in Ivrea; a lot of Barcelona makes have passed through our hands more recently. Nothing against Spain, of course, but I like to be authentic and so this was a welcome bonus. 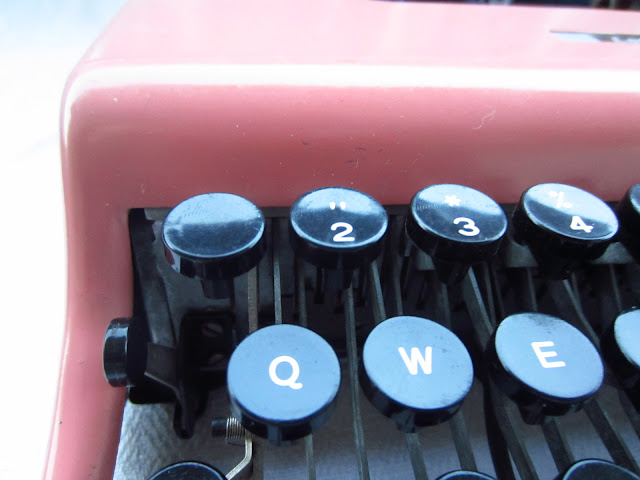 A closer look at the bubblegum-pink color (more of a dusky rose, actually) and classic round keys ( I have noticed that the Lettera 22s made in Glasgow had square keys for some reason).

In the interest of full disclosure, these pictures have been over-exposed ever so slightly, as the light was rapidly fading when I had time for a photoshoot. Still, the end result shows the color of the typewriter as it would be in full daylight (take a look at the market picture for comparison).

The original guarantee dated 30 June 1960, showing the serial number (it matches up) and the place of purchase: Grands Magasins Innovation SA. I looked up the store and found out it was in the center of Geneva on the Rue du Rhône (present day Globus) and went bankrupt after a fire ravaged the premises in December 1995.

Instructions for first use: "How to free the machine from the cardboard and paper packing."

Front page of the brochure that came with it, showing two other colors of the Lettera 22. This makes four that I know of: pistachio green, blue, pale pink, and taupe/ tan. However, the Glasgow factory also produced salmon pink and teal Letteras, which I will take to be variations of the pale pink and pale blue.

Another page of the brochure shows an ad for the Lettera 22.

And the last page shows the typewriter's special features, as well as the list price (I think) of CHF 328.- The 198 written in pencil is - I believe - referring to the list price of the Skyriter (written on the brochure I found in the case, which I shall post later), and so the buyer probably made the note in order to compare the two.

A couple of pages from the manual here -

No need to post the whole thing since it is in French and the English version can be found easily online (for example on this site). 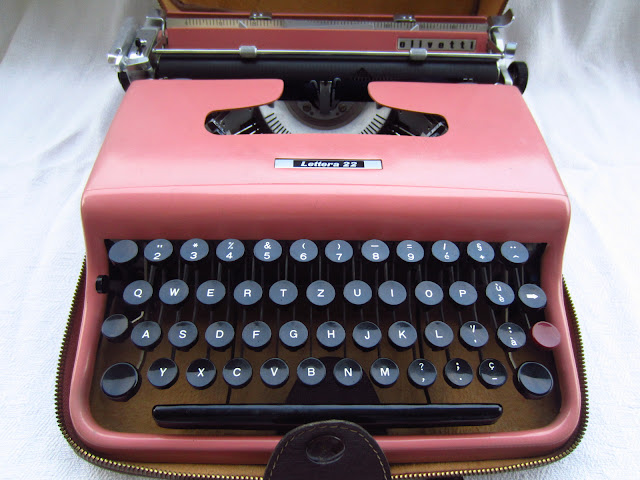 Whew! And now that she has made her debut, little Miss Lettera is packed safely off to rest. As you may have noticed from the typecast, she came with an ordinary pica typeface and I have fitted a blue cotton ribbon. It would have been just too perfect to find a portable that was both pink and script, but as I have other lovely script machines to use, I don't mind too much.

It has been a while since I came across a find this thrilling - well worth breaking my vows of typewriter chastity! Now fingers crossed that Retro Technica this weekend will not test my resolve any further...