As I said in my previous post, it has been a while since I visited the Geneva market. In fact, I have not been there in an entire month, since before leaving for Milan. With the sun out this morning and - finally - a few hours with which to explore, I headed off with high expectations. And it did not disappoint; I even BOUGHT something. Yes, me. BOUGHT. A new typewriter. Breaking nearly a year's fast. So naughty, and yet... so exciting!!!

But, more on that later. For now, here is the run-down: 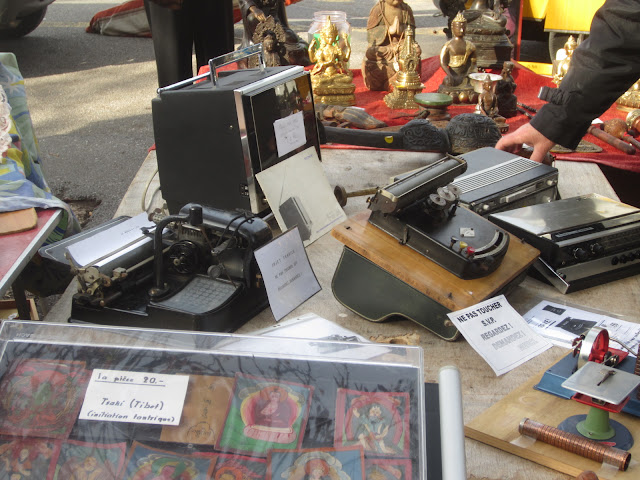 In this post on the blog back in July, I wrote about a Mignon typewriter that has been appearing at the market on and off, from the same seller, for at least the past two years. Well, it was back today! This time accompanied by a Gundka typewriter... 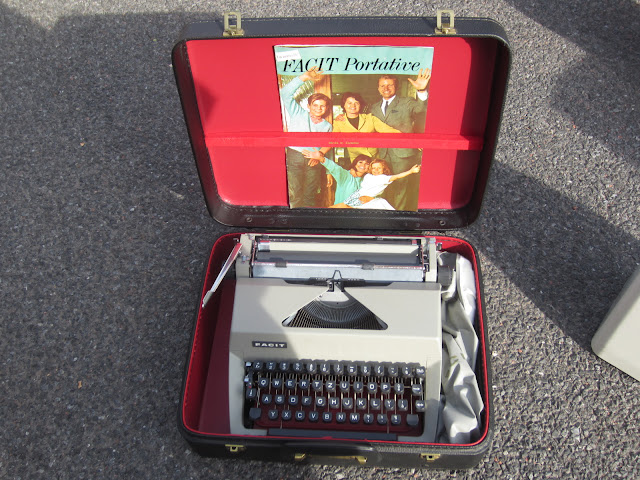 The nice thing about staying away for a month, even inadvertently, is that almost everything is new, not the same old thing dragged out over and over again (well, except for the Mignon). Here, a Facit portable with an impossibly cheery original brochure. Now I'm curious as to what was in it; I should have flipped through the pages at least. Maybe next time. 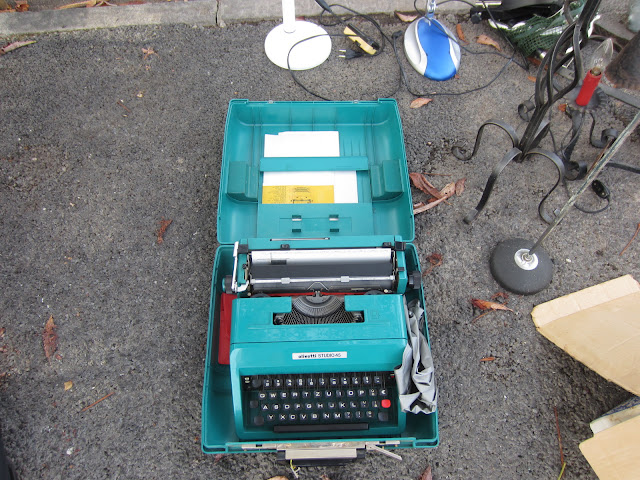 This was the second-best sighting of the day (I bought the first one :P). An absolutely pristine, teal / turquoise Olivetti Studio 45. Techno typeface, complete with brushes, cover, manual, all the works... ten bucks. Yep, you read that right. I almost wept. 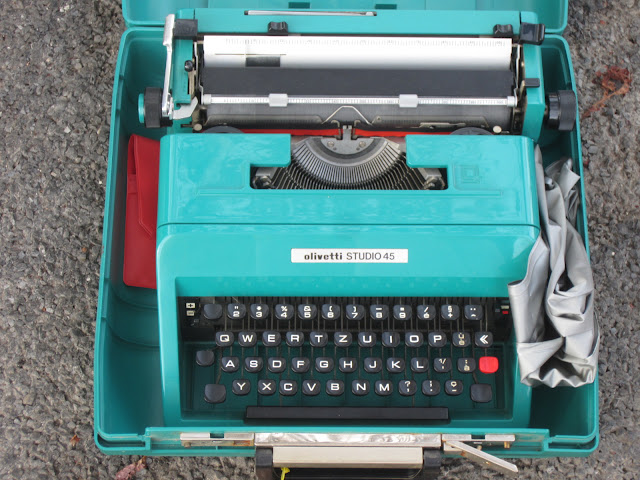 Just a closer look to rub it in - by the way, the case also had its key intact. I justify leaving this behind for three reasons: 1. plastic 2. quite large 3. techno... meh. But that color! It is just brilliant, really; I can't stop looking at it. So pretty. Of course, the design aesthetic is superb as well... but you'll have heard that from Ton already. 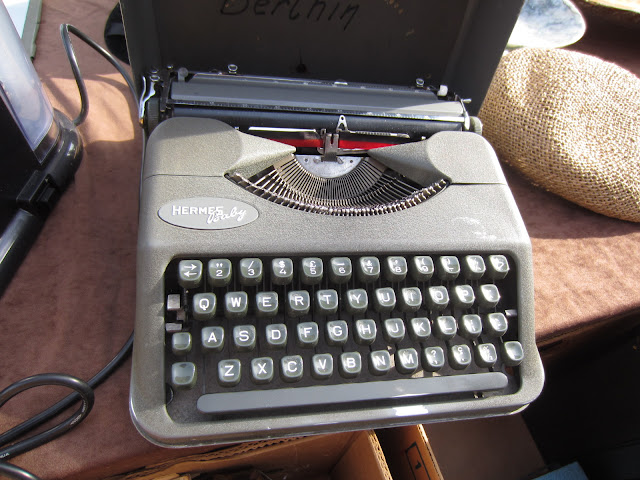 A QWERTY keyboard Hermes Baby! These do not come along often, I can assure you. I looked at it for a good, long while, but walked away for three reasons: 1) I was already carrying my purchase and could not possibly get another; 2) gray, and pretty drab at that; 3) Hermeses are rather common around these parts... It looked pretty well-used, but not too bad; and of course there was that comfortingly familiar English keyboard. Sigh. 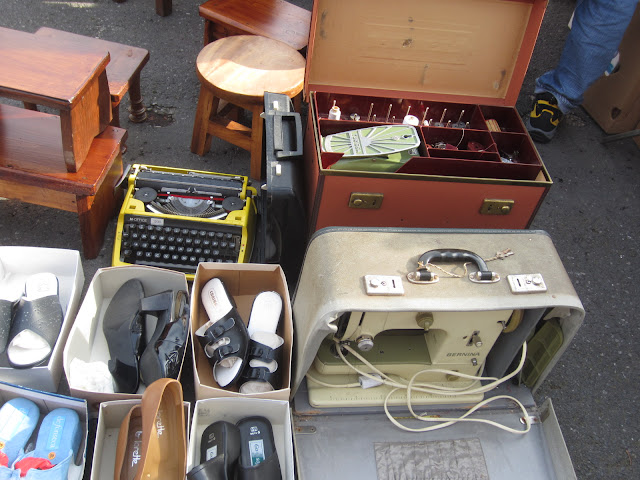 A yellow "topless" (ribbon cover missing) M-Office typewriter (originally a Brother) hangs out with a couple of sewing machines. 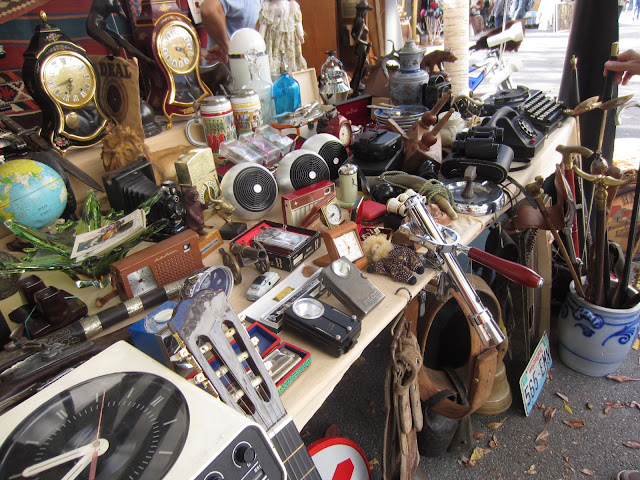 Before I get on to sewing machines, and while we are on the subject of typewriters, we were briefly in Zurich last Saturday and made a point of visiting the flea market at Bümpliplatz. Somewhere on this crowded table, there is a typewriter... do you see it? 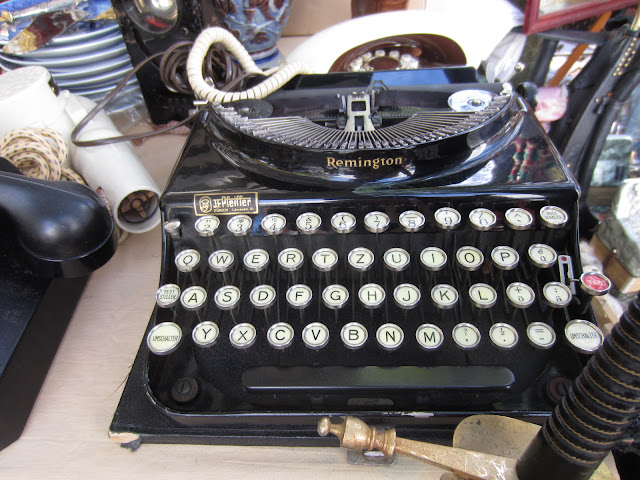 Here it is - a shiny, beautiful, Remington No. 3. Prices were rather high, so I was happy just to look. I have to say, after my luck in Geneva these past years, I have found that it is just not worth typewriter hunting anywhere else. We have the variety, the reasonable prices, the odd languages... it's not called Typewriter Paradise for nothing! 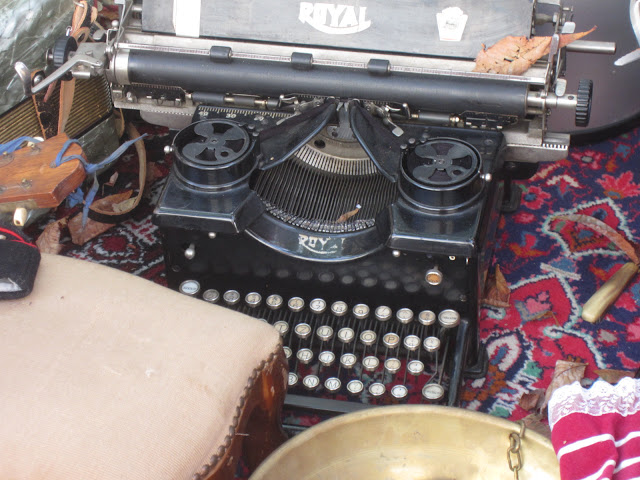 It was a fairly large market, but there was only one other typewriter to be spotted: a yawn-worthy Royal 10. Back to Geneva, I say! We put on a much better show. Or perhaps I just caught Zurich at the wrong time; now that we have Florian as a regular "correspondent" from that city, we should get more accurate updates on the availability of typewriters in the wild there. 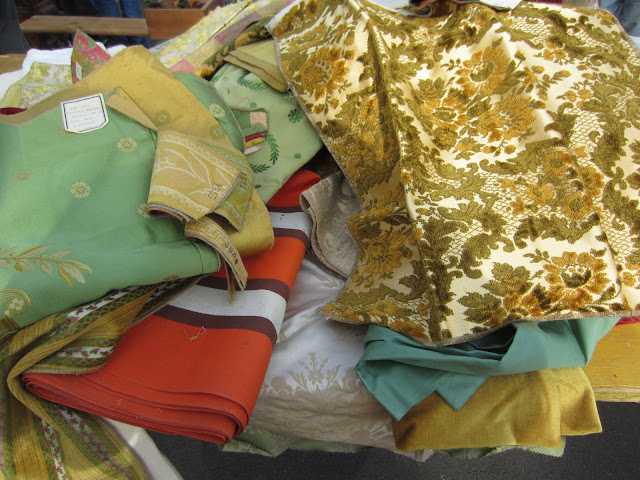 A little detour - in the market today there was this jumble of upholstery fabric scraps, being offered for awfully high prices. I looked through a bit, but what caught my eye was this: 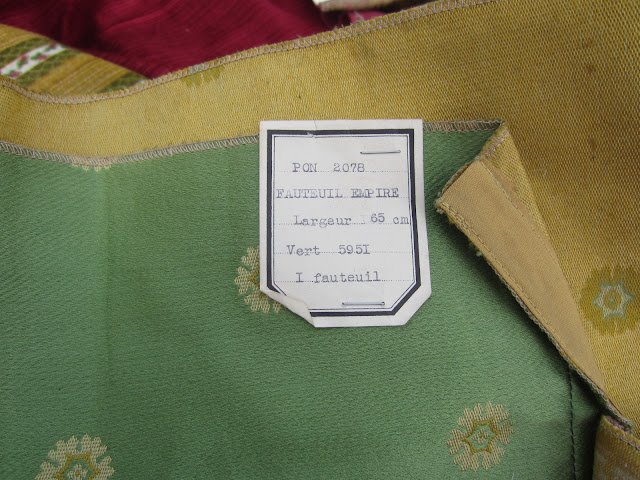 I can just imagine the proprietor of the store where this came from carefully typing those tags all those years ago... perhaps on a Hermes typewriter, too. Lovely thought!
Posted by Adwoa at 11:13 PM